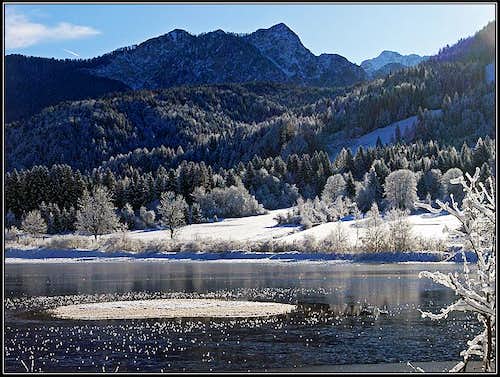 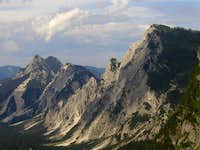 The name is pronounced something like 'Tsippernick'. The strong crest, going from the summit of Jalovec towards the NE is in the beginning unique, bearing the high summits of Šite, Travnik and Mojstrovke. With Mala Mojstrovka and Nad Šitom Glava it finishes and drops with steep northern walls down on a small high plateau of Sleme. There, the marked path from Vršič pass goes over and down into the Planica valley.

North of this place a broad area stretches, where you will rarely find anybody. This is the world around the beautiful valley of Mala Pišnica - lonesome, only here and there you will find a tiny hunters path (anyway you will not be able to use it, since it's logic is completely different as hiker's logic), also a very wild world, where almost all the summits are hardly accessible. The eastern branch bears a set of wild summits which somebody will hopefully describe on another page. The western branch, rising between Planica valley and Mala Pišnica valley is the topic of our page.

It starts with the famous balcony of Slemenova špica, north of Sleme. It already has its own page, so here I shall describe mountains north of Grlo pass, 1516 m. The first summit north of Grlo is Sračnik, 1562 m. Nobody visits it, perhaps only some hunters. The next one is Suhi vrh, 1645 m, its destiny is the same: wild, remote, protected with broad areas of impassable pine-bush. Beyond a small notch, 1484 m, the highest summit in the group rises: Visoka peč, 1749 m. Again the same story - hunters paths approach it, but it is very rarely visited. And then comes the neighbouring Ciprnik, 1747 m, which is very popular. From Vitranc cable-car a comfortable path ascends on its summit in less than an hour. It is a great panoramic point, satisfying thus many tourists of Kranjska Gora, especially if they decide to do a round tour. From Ciprnik to Vitranc a beautiful ridge goes. As it is already covered with woods, it offers panorama only on a few places. But hiking by its picturesque old larches is very rewarding. The last summit, worth of mentioning, is Vitranc, 1555 m, already above the well known tourist resort of Kranjska Gora. As said it can be reached with a cable-car or by paths, ascending over several ski slopes. Also Vitranc with its restaurant is very often visited, due to its broad panorama, of course.

The northern slopes of Ciprnik and Vitranc host on their lower parts several ski terrains of Kranjska Gora resort. These slopes are not any more part of the Triglav National Parc, so they are exposed to the human devastation. Still, in winter time only the chair-lifts of Podkoren and Vitranc can help you reach the summit of Vitranc. The others are of little use for a decent tour. West of the area, the famous Planica valley lies. A good mountain road goes just to the Tamar mountain hut, 1106 m. This beautiful meadow with great views on Jalovec and Travnik north walls is itself worth a visit. In winter several cross-country ski tracks run till there, and you will usually be able to get a tea or beer there. In the middle of Planica valley there are the famous ski flying devices. 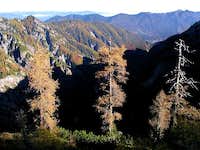 You can hardly imagine a more attractive mountain valley than Mala Pišnica. Its mouth is just near Kranjska Gora, at Jasna lake, where the famous road over Vršič Pass goes by. Thousands of tourists look into its gorge, white sands and a beautiful creek, coming out of the valley. And no wonder that some of them try to go into the valley. And here the story begins. You can nicely proceed by the river bed, following the merry creek, until the walls on both sides close. You climb over a few steps, find yourself above their cascades, but sooner or later you realise, that you're trapped. Or you don't! Almost each year tourists and hikers need to be rescued out of the valley. In the past there were also cases, when a Dutch group went into the valley two times - and also the second time rescuers had to bring them out. What you need to know is, that the path goes into the valley some 100 meters above the creek bed, on the northern side. If you find it at the beginning, it will bring you safely to the hunters hut, although also this path is exposed (or may be some times even destroyed) on a few places. Once you reach the inner valley, you've done it. You follow the path again by the creek, pass the hunters hut and if you decide so, you can ascend towards the right through more or less steep woods on Grlo pass. No serious problems any more, just a little sense for orientation. On Grlo you hit the marked path, which you can follow either on Vršič or down into Planica valley. Below Grlo, there's one more attraction. There the oldest larch on Slovenian territory is growing. It's very big, with the top cut-off by a lightning, but still strong and alive. I haven't seen it yet, and it's one of my hot wishes to visit it.

For the broader overview see the Julian Alps overview page and the Mangart & Jalovec Group page!

You can reach Kranjska Gora from the central Slovenia by the Sava river valley, from the West you come there from Tarvisio (lying on the Udine-Villach highway), or from the North from Villach over Korensko sedlo / Wurzen Pass. If you are coming from the southern side of Julian Alps you need to cross them over the beautiful Vršič Pass, 1611 m (closed in winter). 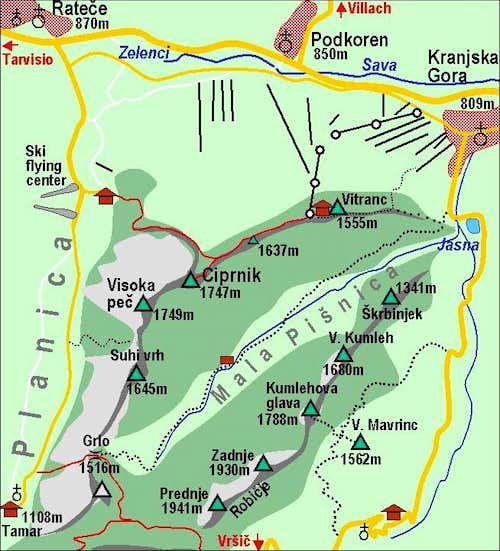 1. The path into Mala Pišnica valley was already described (see also the SP route page). Actually it does not touch any of the summits in our small massif.

2. Vitranc - Ciprnik. From the upper station of Vitranc chair-lift you follow the marked path, going beautifully by the main ridge towards the SW. The upper part is more steep, but not exposed. 45 minutes, very nice!

3. Planica - Ciprnik. A nice marked path starts in Planica valley, just opposite of the ski flying arena, at Dom v Planici, 934 m (mountain hut). You ascend first towards the SE, but soon the path goes in turns up in the eastern direction. After gaining some 200 m, the path starts crossing steep forrest slopes (dangerous in winter!) towards the south, ascending on a panoramic point, from which we have a beautiful view on the ski flying arena. Here is also the construction, which was used for TV cameras, when broadcasting ski flying events. From there on we follow a distinct ridge towards the East. On the right we allways have the rocky face of Ciprnik, while our path comfortably follows its NE ridge. On the altitude of some 1600 m our path hits the Vitranc-Ciprnik path and towards the SW we follow it to the top. For 820 m we shall need some 2:15 h.

What obviously comes on our mind is the round tour. From Kranjska Gora we ascend Vitranc (may be with a chair-lift), proceed by the main ridge to Ciprnik (45 minutes), enjoy a broad panorama, return a bit and descend into Planica valley (2 h), and finally march around the mountain back in Kranjska Gora. A fine half day hike!

The southern summits of the group can be approached by hunters paths. Information about them is very obscure and unreliable. One description says that one path deters towards the North by the hunters hut in Mala Pišnica. The path is hard to follow, on some ledges, passing vertical rocks also very exposed and thus not to be recommended. Or - just because of that - yes, for people, seeking adventures and pine-bush fighting. On the map, there's also one path from Planica valley up towards the notch, north of Suhi vrh. But there it gets lost. The western slopes of Ciprnik and Visoka peč are rocky, but they are not attractive for climbing. Still, in winter their ravines offer one or two waterfalls for ice climbing.

We don't need to sleep on the mountain, the usual described routes are short and easy. A useful mountain hut is Dom v Tamarju, 1106 m, (04) 5876055. For accomodation, see the Kranjska Gora tourist web page!

Ciprnik can be climbed any time of the season. In hard snow we need the appropriate winter equipment for the upper slopes, which are steep and can be dangerous (crampons, ice-pick). In summer we need just a hiking equipment. For weather see wunderground - here's the direct link to Kredarica station, 2515 m (below Triglav summit).