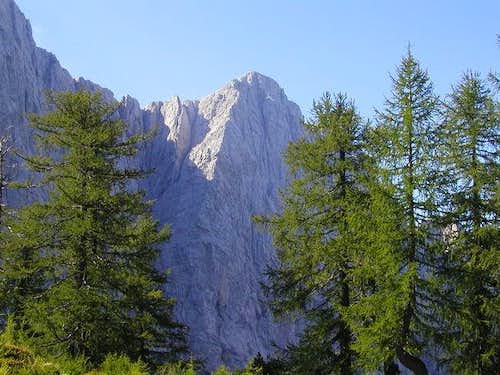 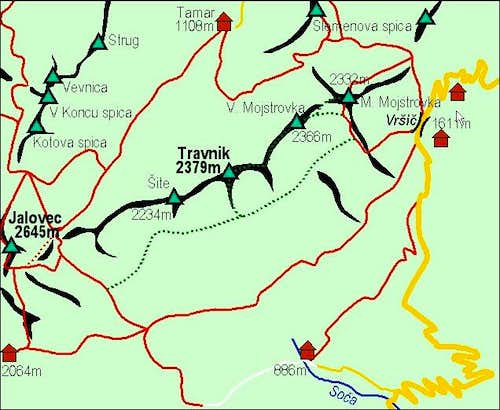 Travnik is the central figure in the long wall from Mojstrovke towards Jalovec. This is one of the finest climbing areas of Julian Alps. Starting with vertical drops of Mala (Small) and Velika (Big) Mojstrovka, continuing over Travnik and finishing with the hardest section of Šite, this 4000 m long and almost 1000 m high wall for decades attracts the best climbers from all around Europe. Although the ridge from Mojstrovke to Šite does not vary much in altitude, when walking into Planica valley you immediately recognize Travnik by its huge triangular NW face.

Looking on the southern side, we understand the name (travnik=meadow). High grassy slopes, intermitted by rocks, are rising above Zadnja Trenta valley. All these slopes under Travnik and Mojstrovke are named Dnina. If someone would scramble over these south-east slopes to the top, (s)he would be surprised, reaching the summit. Here warm, grassy slopes, on the other side suddenly a cold, vertical drop.

Although the main visitors are certainly climbers, in the last years, as mountaineering has developed so much, many ordinary mountaineers also reach the summit of Travnik. There's no path on it, only a few old, washed out marks can help you to cross the SE slopes of the massif, but crossing the whole ridge from Mala Mojstrovka to Travnik and returning back over the SE slopes is so rewarding, that more and more mountaineers do this tour. And finally, I didn't do it, and it is not described as such, but I'm quite positive that from the summit of Travnik also a ski tour can be done. Why just everyone does only the ski tour from Mojstrovka? Perhaps the only drawback of Travnik ski tour is distance and crossing a few side ridges.

What's especially rewarding is also the panorama from Travnik's summit. Jalovec is so close, Mangart a bit more remote, but also on the other side, towards the east, many Julian Alps giants are standing, beautifully arranged in equal distances. In this parade the first one is Špik, then Škrlatica, Prisojnik, Razor, Triglav, Kanjavec and Krn. And not to speak about the more remote ones.

Mojstrovke and Travnik above the Planica valley

For the general orientation see the Julian Alps group page and the Mangart & Jalovec subgroup page!

For the eastern ascent you must reach Vršič Pass, 1611 m - on the road from Kranjska Gora through the Trenta valley to Bovec.
For climbing in its north wall you must reach Dom v Tamarju (hut), 1108 m, at the end of Planica valley.
Would be possible, but almost nobody is ascending Travnik from Zadnja Trenta valley. There is Koča pri izviru Soče (hut), 886 m, and a bit further another parking place on 900 m. 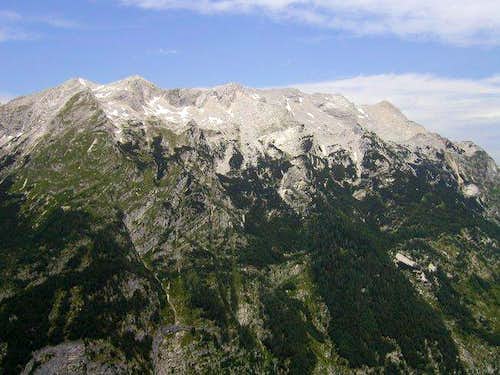 The southern slopes of Travnik (left) and Mojstrovke (right)

The summit of Travnik can be reached by 3 routes, the first two of them can be nicely combined into a round tour. The third variant would be from Zavetišče pod Špičkom (hut), or even from the last parking place in Zadnja Trenta. We would climb Travnik from the SW, then continue by the main ridge over MOjstrovke and descend on Vršič pass. If we had a car in Zadnja Trenta it would be wonderful to prepare bikes on Vršič! 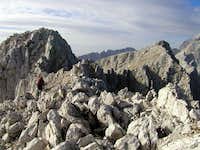 On the main ridge - Travnik behind

1. By the main ridge from Mojstrovke. This is a very nice, panoramic, but on some places quite a demanding hike, which requires some experiences in a pathless terrain. By the Swiss Hiking Scale its difficulty would be rated T4/T3. Equipment: only good shoes and poles.

See the page of Mojstrovke how to reach Mala Mojstrovka, Velika Mojstrovka and Zadnja Mojstrovka. The continuing of the main ridge towards Travnik now becomes even more narrow, unpleasantly exposed and requires a lot of care. After passing the narrow part, the continuation of the ridge is easier again. But there is no more path at all. After crossing a steep, rubble covered slope, we descend into a narrow notch and (exposed passage) easily climb out of it. So we reach the slopes of Travnik, where we keep more towards the left. The ascent becomes more and more easy, but the summit of Travnik is quite rocky. From Velika Mojstrovka we have 2 h till there, from Vršič pass altogether 4 h 30 min.

2. Across the slopes of Dnina. There goes an old path from the times between World War I and World War II. It was marked with yellow spots, which are nowadays mostly decaded and also the path is almost completely lost in the terrain. Still, this approach is even a bit less demanding (T3) than the main ridge variant. Equipment: only good shoes and poles. From Vršič pass it's 3 h 30 min to the top. 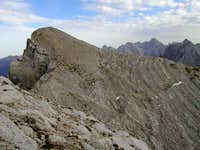 The summit west of Travnik is named Kol, 2350 m. From Travnik it is relatively easily reachable. But the ridge further towards Šite becomes very narrow and exposed. Its crossing requires climbing of UIAA degree II and quite some skills of finding the best passages.

3. Travnik from the southwest. The yellow marked path goes from the south ridge of Travnik further across the slopes, until below Jalovška škrbina it hits the marked path, coming there from Vršič (or from Zadnja Trenta up). So, the ascent on Travnik is possible also from this side, but I don't know the exact passages.

In the alpine history of Julian Alps a major role played the most famous of all Travnik routes, first climbed by the famous P. Aschenbrenner & Tiefenbrunner. Below are some of the most popular routes. 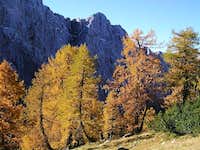 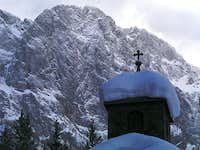 Travnik from before Tamar hut

The five useful huts are: