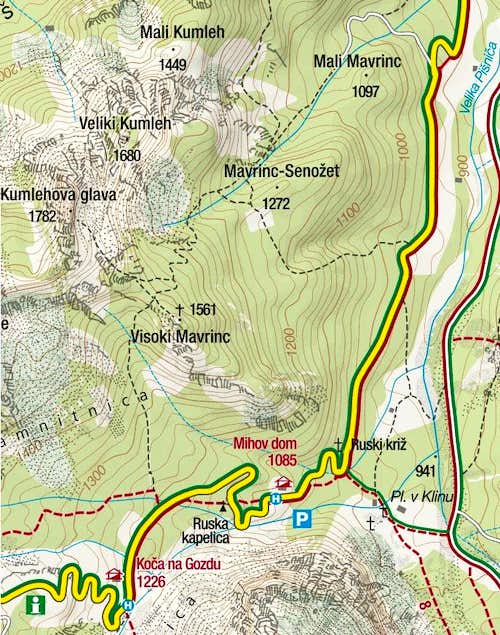 The valleys of Mala Pišnica and Velika Pišnica are divided by a rugged, overgrown crest of unattractive mountains, which in the past almost nobody ascended. When you are driving from Kranjska Gora towards the south and on Vršič pass, you can see these mountains on your right side. Actually they are one branch of continuation of the long crest, which comes here from Jalovec over Travnik and Mojstrovke. The crest begins (below) at Jasna lake, where the confluence of Mala and Velika Pišnica (creeks) is. Over Ivje, 928 m, the crest first rises on the summit of Škrbinjek, which is already partly rocky. Then the mess of rocky summits continues towards the SW, here the three summits named Kumleh stand. The first one is Mali (Small) Kumleh, 1451 m, then Veliki (Big) Kumleh, 1680 m, and finally Kumlehova glava (Head), 1788 m. After Kumlehova glava, the crest opens a bit. Here scree slopes are coming down from Zadnje Robičje, which is already quite higher. Above screes there is first Vavovje, 1810 m, then as said Zadnje Robičje, 1930 m, and finally Prednje Robičje, 1941 m. On Vratica saddle, 1799 m, this crest attaches to Šitna glava, 2087 m, which is already a part of Mojstrovke crest.

Paralelly to the lower part of the crest, on the SE side, a forested and hardly distinguishable crest of three summits named Mavrinc (also: Mravinc) goes. Only the highest one, Visoki Mavrinc, 1562 m, has a small clearing on its top. Enough to offer a great panorama towards the east! Between these three summits and the three Kumleh summits there is a shallow valley, called Za Kumlehi (Behind Kumlehs). In the lower part sometimes a weak creek flows through it.

Who knows what the word Kumleh means? Sounds very archaic and an explanation can't be read anywhere. The other name, Mavrinc (Mravinc) could come from the word mravlja=ant. In the past, except local hunters, probably nobody ascended Kumlehova glava (and other summits). But then a description of their path, being cut through the upper flank of pine-bushes, appeared in mountaineering books, and probably many people decided to challenge the ascent which is so close to the main road over Vršič pass. We ascended the summit on November 11th, when the upper (and sometimes steep) slopes were already covered with the first snow. And yet we saw quite many tracks on the path, especially on the descent to Koča na Gozdu. We even met a young family with a small child in a backpack, attempting the ascent. And it was worth doing it. The panorama from the top is really impressive!

On the ascent on Kumlehova glava you get the first dose of panorama already when reaching the summit of Veliki Mavrinc. This is the eastern and southern part. When you reach Kumlehova glava itself, the western and northern part is added. The most beautiful is Martuljek-Škrlatica group on the east. The giants of Razor and Prisojnik are known to us also from other points of view. Then the view on Zadnje Robičje, Mojstrovke and Jalovec is very special from here - wild, rugged summits. On the other side of Mala Pišnica and above Planica, there are Mangart, Kotova špica, Vevnica and Ponce chain, and in front the Ciprnik ridge. Finally the northern views go towards Austrian mountains, especially Dobrač is clearly seen. 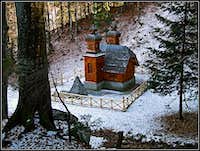 The only recommendable starting points for the ascent on Kumlehova glava are on the road over Vršič pass. For the broader overview see the Julian Alps overview page and the Mangart & Jalovec Group page!

You must reach Kranjska Gora town (a well known tourist resort) and then drive towards the south. I have no information how these summits could be ascended from the N and NW, from Mala Pišnica valley. This valley itself is a bit hard to reach, for the description see the Ciprnik page and the Through Mala Pisnica Valley route page. Then I know that hunters use passages also towards Robičje and Vratica pass, around Zadnje Robičje also a partly marked route 'PP' goes (Planica - Pokljuka, for enthusiasts only). But on the lower part of the valley, where Kumlehs rise, there are almost no known trails.

A few turns above Mihov dom (hut) in the forest, just above the road a small wooden chapel stands. It is a rare monument from the World War I, erected in 1917 by Russian prisonners, who were building the road over Vršič pass. It is a memory on 110 prisonners and a few guards who were killed by an avalanche, but also as a memory to many others, who died during building the road. Link to the SummiPost page is here.

There are only two recommendable routes on Kumlehova glava, known to me. Actually, only to the small saddle between Visoki Mavrinc and Kumlehova glava. Further up there's only one trail to the top. The two routes can be nicely combined into one tour, lasting good half a day.

We park on the Curve #2 of Vršič road (they are numbered, yes), 925 m. By a cart-road we go up towards the NW till the creek bed. Till here also a path from Hotel Erika comes (from the right). Then we follow the cart road till its end on a clearing. There we choose the path on the right (same direction, SW) and higher on the right branch again. We continue through the shallow valley Za Kumlehom. Where the path crosses a distinct ravine, we leave it to the right (so keeping in the valley) and find another path, going along the creek bed. In the upper part the path hits the scree field below Veliki Kumleh, turns left into the woods again and then in several comfortable switchbacks up on the saddle between Visoki Mavrinc and Kumlehova glava. Here's the crossroads. First it's recommendable to ascend Visoki Mavrinc. In a few minutes we reach a small, panoramic clearing on its top. Then we return back on the crossroads (small saddle).

The summit ascent goes first by a quite steep ridge. Some 15 minutes later it gets rocky and the path goes right around this rocky bump (we can also climb over it). Then we are already in a pine-bush terrain. The path climbs over a steep rock above an exposed gully, then goes through dense pine-bushes. It is well cut (by hunters), but on a few places we feel like being in a tunnel. Although steep, it is not dangerous. Just below the summit ridge the path does two longer horizontal crossings through pine-bushes, which we must follow. Finally we reach the summit ridge and the top. Times: From the road to Veliki Mavrinc - 2 h 30 min. From Veliki Mavrinc on top - 1 h.

Some 200 meters down the road from the hut, we see a short cart-road, deterring from the main road. We enter it and soon come to the crossroads. The left path is marked and goes towards Vršič pass. We must go by the right path, strictly in the northern direction. This path is not marked, but well beaten and easy to follow. In many turns it brings us through the broad passage between Zadnje Robičje and Visoki Mavrinc. There it turns a bit towards the right (NE) and again in many switchbacks up. Just below the saddle, one path deters left. It has the 'PP' marks. Leave it, as it goes across the crest into the upper part of Mala Pišnica (actually later it is not a path). Continue to the saddle between Visoki Mavrinc and Kumlehova glava and as described above under #1 on top. 2 h 30 min from the road. 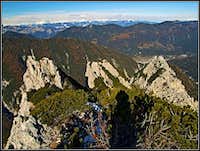 We are within the borders of Triglav National Parc. Otherwise there are no restrictions and also the road over Vršič is still toll-free (parking on the saddle is payable).

The best months are from July till October. After the first snow falls, the ascent may still be possible, it depends on its quality. The most dangerous are steep and slippery slopes in the forest. In a hard snow, the ascent with winter equipment might be as enjoyable as in the summer or autumn, because in the upper slopes we are protected with dense pine-bushes. I wouldn't recommend only an ascent in a deep, fresh snow, unless you enjoy trudging steeply up trough dense woods and bushes.