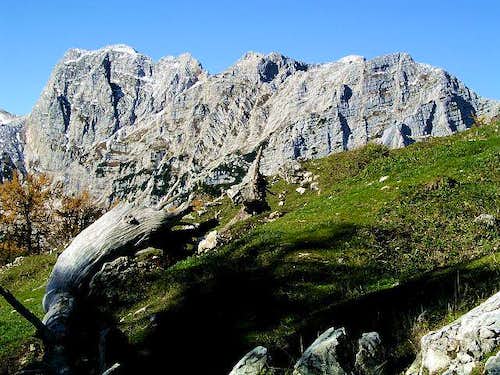 Kotova špica (far on the left) from the east 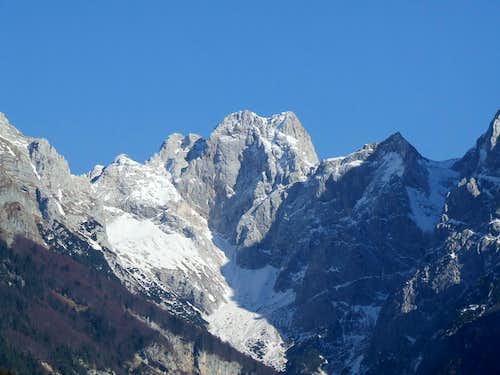 Kotova špica is a sharp southernmost double peak of the long side crest which comes from the north from Visoka Rateška Ponca and over Vevnica. The main crest of Julian Alps, coming from Mangart on the west, turns southwards on the summit, called V Koncu špica, 2350 m. From it, towards the north branches the Vevnica and Ponce crest, while towards the south the sharp Kotova špica stands. Further towards the south the crest drops down on the broad Kotovo sedlo (saddle), 2134 m and beyond it continues towards Jalovec.

Most nicely the mountain is presented from Kotovo sedlo - as a sharp, hardly reachable cone peak. But great is also its W face - there the walls are falling steeply into the valley-end of Koritnica. Only a bit less steep and impressive is the E face, looking towards Tamar and Planica valley.

Although being so nice, often admired by tour skiers from Kotovo edlo, Kotova špica is seldomly ascended. The reason is a hard and complicated normal route from the less populated western side. The once secured route is now destroyed by avalanches and is for non-climbers quite hard to do. But reaching the big summit mushroom is a rewarding experience and also the panorama on all sides is great. Especially nice is the sharp-edged Jalovec and its north face. The nearby V Koncu špica, 2350 m is less important as a mountaineering goal. It can be reached by easy climbing from the saddle between it and Vevnica (UIAA II) or from the notch between it and Kotova špica (UIAA II). 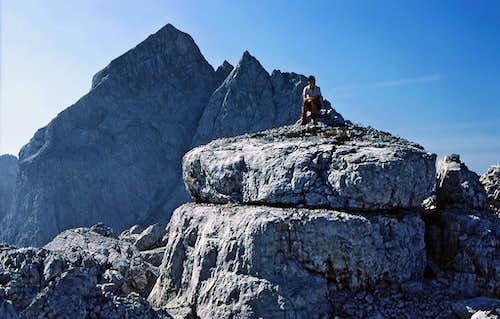 From Kotova špica towards the east

Due to its height and central position the views from Kotova špica are very nice and various. The most attractive is the view on the mighty Jalovec, which sharp edges and northern wall are rising just on the other side of Kotovo sedlo. Across Planica valley we can admire the long, monolythic wall of summits from Mojstrovke over Travnik to Šite. More in the distance, above that wall, all other principal summits of Julian Alps can be seen - from Martuljek group, over Škrlatica, Prisojnik, Razor to Triglav and its neighbours. Towards the west, we can see the strong ridge, rising on the summit of Mangart and towards the north there is the ridge on Ponce.

Show a bigger map
On the above map the marked, protected route from Kotovo sedlo to the valley-end of Koritnica is not shown. But pay attention to the following well presented details: (1) From the north the difficult Via della Vita (ferrata) comes up. (2) From the SW the marked route from Koritnica comes up. (3) A further branch of Koritnica route reaches the bivouac on the main ridge.

1. The normal ascent from the end of Koritnica valley (called V Koncu = At the End). You can reach this point either from Planica valley over Kotovo sedlo, or through Koritnica valley. The joint point of both approaches is on the altitude of some 1680 m. From there you proceed by the marked path towards Žagerica (notch), but only to the branching on some 1900 m. You have already passed the W walls of Kotova špica. There a weak trail branches right (the trail was built after the World War I). By it you cross by an exposed ledge, then ascend up, cross a ravine and on the other side climb up on the notch between V Koncu špica and Kotova špica. Then southwards to the highest point. UIAA I-II, from Tamar cca 6 h, from Log cca 5 h.

2. From Laghi di Fusine towards the south and by Via della Vita (difficult ferrata) to the saddle between Vevnica and V Koncu špica. Then crossing the summit of V Koncu špica to the notch between V Koncu špica and Kotova špica (UIAA II) and to the highest point. Cca 5 h.

3. As Bor describes, the saddle between Vevnica and V Koncu spica can be also reached over the southern slopes of Vevnica. That would be the fastest approach from Planica valley. UIAA II. Cca 5 h.

4. The most natural route on Kotova špica is to climb the 200 m high walls above Kotovo sedlo (saddle), 2134 m. That route was used by local hunters even before the first climbers came. So, the easiest ascent from the south starts on Kotovo sedlo, detours the nerby Špice v Planji, 2198 m (see the map above), and goes then by a ledge on the main ridge. Then the route follows the main ridge, partly over distinct slabs, until it reaches the steep walls. So, from above the slabs you cross left into the W wall and then right up on the S fore-summit of Kotova špica (that's the most difficult part). Then northwards on the main summit. UIAA II+, Good 1 h from Kotovo sedlo. 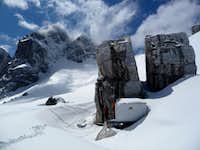 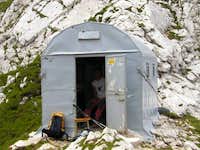 The two useful huts and two bivouacs are: