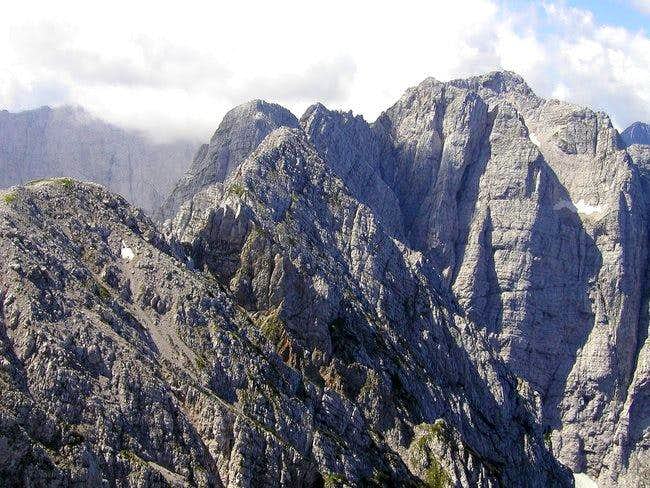 Vevnica and other mountains in nearness from Visoka Rateska Ponca.

Between Mangart, 2678m, and Jalovec, 2645m, from the Main Julian Alps a strong side crest spans towards north. Attached to the main crest on V Koncu spica, 2350m, it goes over the strong Vevnica, 2340m, Strmi Strug, 2265m, Zadnja Ponca, 2265m, Srednja Ponca, 2228m to Visoka Rateska ponca, 2272m, which is the last high mountain in this wall. More towards north it drops significantly to Vratica notch, 1844m, above which Mala Ponca, 1925m, stands and then the crest gets lost in woods above the upper Sava valley.

Vevnica is a very powerful mountain with a lot of slopes and big faces, which are respuned with ravines, pillars, crests, steep grassy slopes and deep notches...

Vevnica leads on the frontier between Slovenia and Italia. From Italian side shows very powerful and very steep north face, which is one of the steepest and hardest faces in Julian Alps group. Below the north side are Belopeska jezera / Laghi di Fusine (the lake). These two lakes are very beautiful and from there is very beautiful view on huge faces of Mangart, 2678m, Mali Koritniski Mangart, 2370m, Vevnica, 2340m, Strmi Strug, 2265m and all Ponca ridge. To the W side goes from the summit of Vevnica nice ridge and ends on Mangart. On this ridge stays a nice bivouac on the notch Rob nad Zagacami, 2145m. The notch Rob nad Zagacami is end of valley Koritnica, which comes from the SW side (Slovenian side). To the NE side goes from the summit another ridge to the Strmi Strug and Velika Belopeska Ponca. From Slovenian side on the E and SE side falls down the steep grassy face. Below this face is a beautiful valley Tamar. On the S side is Vevnica connected with V Koncu spica, 2350m and Kotova spica, 2376m and then with Kotovo sedlo (pass), 2138m and Jalovec, 2645m.

Vevnica has a lot of approaches that are all hard, straining and long. The most famous approach to the summit is over ferrata (a secured climbing route) Via della Vita from Italian side. This is the hardest ferrata in Julian Alps. This route is the most popular but is the one of the hardest. If you want to climb on Vevnica from Slovenia from Tamar valley you must ascend over Kotovo sedlo and then descend quite a bit and then again ascend on the notch Rob nad Zagacami. Here comes the connecting path to Via della Vita too.

There are many other possibilities that are unmarked and you must find the best passages. Nice climbing route is if you cross the entire ridge from Visoka Rateska Ponca to the Vevnica. This is a beautiful experience. 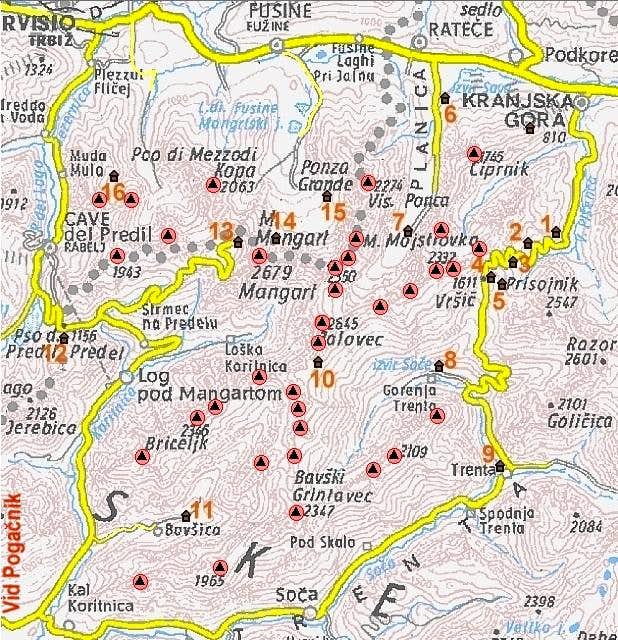 For the east ascent you must reach Ratece village in Sava valley and drive in Planica side valley to Tamar alpine meadow, where the trailhead starts. The upper Sava valley can be reached from the Central Slovenia (via Jesenice), from Italy (via Tarvisio) or from Austria (via Karavanke tunnel or one of passes over Karavanke ridge).

For the west ascent you must reach Belopeska jezera / Laghi di Fusine below Mangart. Driving from Tarvisio (highway exit), you reach Bela pec / Fusine and take a good, narrow road towards south.

Vevnica is very nice place with a fine view on all mountains in Julian Alps. The most impressive are mountains of Jalovec and Mangart group. Like Jalovec, Mangart and others...

But also other the highest mountains of Slovenia.

Vevnica has many possibilities for ascend of various difficulties.
I have listed some marked routes and some unmarked approaches.

Over Kotovo sedlo and over Rob nad Zagacami pass, SW,SE and S side from Slovenia from Tamar valley or Koritnica valley, secured marked route.


Some climbing routes in the north face of Vevnica.

No limitations but Vevnica is located in Triglavski Narodni park so you must be kind to the nature and other beauties.

The only thing you might pay is parking on selected locations.

In early summer on the north side are often big snowfields and somewhere are constant which can make you ascend harder. You must take an ice-pick and crampons with you.

Dom v Tamarju (1108m) hut stands on the edge of picturesque meadow, in Tamar, which is upper part of Planica valley. Hut was built in 1899 and since than numerous times rebuilt and renewed, last time in 1984. From here is beautiful view on the towering peaks around, north wall of Mojstrovka and especially Jalovec. This is one of the most romantic spots in Julian Alps. It has 128 beds, hot water, electricity, phone etc. and its open ALL YEAR. Tamar hut is accessible by car from Ratece (6km).

On the ridge is Bivouac called Bivak Rob nad Zagacami, 2160m. It is very nice bivouac in the beautiful area and it is very nice supplied.

Camping inside the National Park is forbidden. Beside the mountain huts there are plenty of hotels and private apartments in the towns and villages, which surround the area. Here are few links where you can find info on accommodations closer and further away: