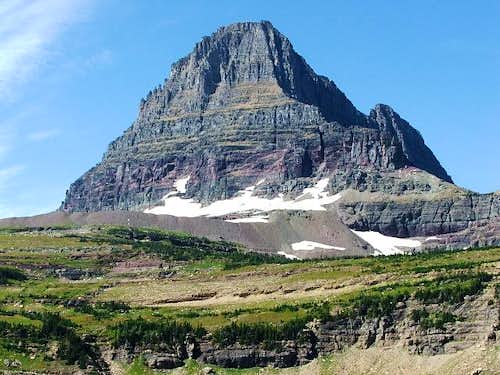 Clements Mountain from the northeast. Photo by montanaboy 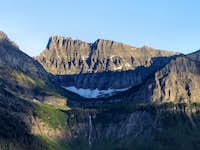 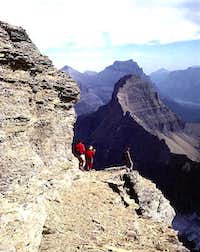 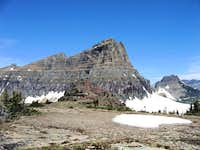 Clements Mountain is located slightly less than one mile due west of the Visitor Center at Logan Pass in Glacier National Park. Viewed from the pass, the peak appears quite similar to its neighbor to the south, Reynolds Mountain. In fact, the two are frequently mislabeled in photos. However, whereas Reynolds Mountain is a true horn, Clements Mountain has a long west ridge extending behind the imposing looking east face seen from the Visitor Center. This long west ridge is the easiest route to the summit. The most interesting climbing is via several technical routes on the east face. Clements Mountain was named for Walter M. Clements who helped negotiate the treaty with the Blackfeet which enabled the Federal Government to purchase the land that includes all of what is now Glacier National Park east of the Continental Divide. Norman Clyde made the first recorded ascent of Clements Mountain on 13 August 1923. 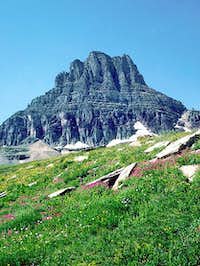 Current Entrance Fees Registration for day climbs in Glacier National Park is recommended, but not mandatory. Outdoor Activity Page Includes links to boating, bicycling, fishing, etc. and the regulations applying to each. See Routes Overview regarding area closures in the Logan Pass area. 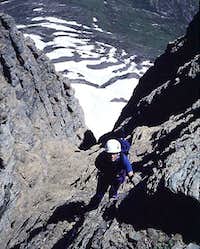 GUIDEBOOK: A CLIMBER'S GUIDE TO GLACIER NATIONAL PARK; J. Gordon Edwards SPECIAL CONSIDERATIONS: Because of the nature of the rock, there are special considerations regarding climbing in Glacier National Park, and grading systems unique to the Park have been developed. Please see this Fact Sheet for further details: GNP Rock & Grading Systems The climbing guide to Glacier National Park describes six routes on Clements Mountain. After most of the snow is melted, the NPS closes the meadows and other areas near the pass to protect fragile vegetation. This impacts the approach to several routes on Clements Mountain. The Glacier Mountaineering Society (web site: GMS) along with the NPS established several acceptable approaches to the peaks accessed from Logan Pass. The information desk in the visitor center has a map showing these approaches. NPS PDF file with maps and descriptions of Logan Pass access routes

1) West Ridge (Edwards Class 2 & 3, GMS III(3)MS) The easiest and also the longest route. The distance to the summit is about 4.5 miles (about 2.5 miles on trail) with an elevation gain of about 2,300 feet.  The ridge is attained by leaving the Hidden Lake Trail after the overlook and traversing upward to the west nearly to the col between Clements Mountain and Cannon Mountain. Once on the ridge, either the north (shady, cool and on firm trail - but exposed) or south (sunny, hot and on a lot of scree) side can be followed with little difficulty nearly to the summit. One must move to the north side near the summit and the climbing becomes very exposed at this point - please refer to a guidebook for details before attempting. A detailed route description is included in CLIMB GLACIER NATIONAL PARK Volume 1

2) North Face (Edwards Class 3 & 4) The north face can be climbed almost anywhere with many variations, some probably class 5. Most ascents of the north face are started by traversing onto the face from the saddle between Clements Mountain and Mount Oberlin. Any route on the north face will join with the West Ridge Route at some point. 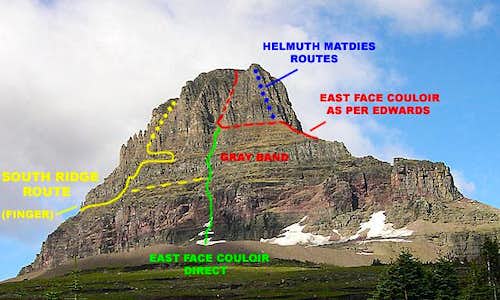 The East Face of Clements Mountain showing the various routes and variations.

3) Helmuth Madies (Class 5 & 6) Two technical routes exist on the steep northeast shoulder of the mountain. Both were led by Helmuth Madies in 1968 and are approached via ledges from the saddle between Clements Mountain and Mount Oberlin. The further west route called the Northeast Shoulder Route is class 4 and 5 all the way. The more easterly route called the East - Northeast Shoulder Route is class 6 for about the first 200 feet, then class 5 the rest of the way to the summit. There is little description of either route. The Glacier Mountaineering Society has a large photo with the routes marked in some detail. 4) East Face Couloir (Edwards Class 4 & 5). There are 3 possibilities for attaining the upper couloir on the east face. The guidebook describes a traverse along ledges from the north. I have traversed to it from the south with a start via the South Ridge Route to attain the ledge system. But in my opinion, the most interesting route is to simply climb the face straight up from the bottom. This adds some steep snow and several pitches of definite class 5 climbing before joining the upper couloir. 5) South Ridge (Class 3 & 4). This route starts above the Hidden Lake Overlook and follows a complicated series of gullies and ledges up the south ridge and part of the east face. Guidebook in hand needed for this one. 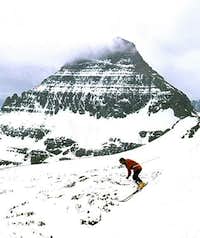 Base of East Face. 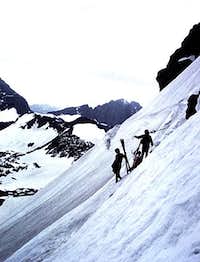 Preparing for the descent.

As soon as the road opens, the area near Logan Pass is the site of much skiing activity. There are a tremendous number of possibilities including everything from long gentle cross country trips to climbing and skiing steep couloirs including those on the east side of Clements Mountain. In the past, the NPS has on occasion discouraged the latter activity stating that they do not want experienced skiers to somehow lure tourists onto steep snow where they do not belong. It might be good to check for signs or with the rangers. 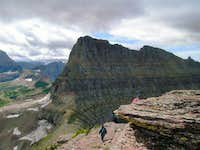 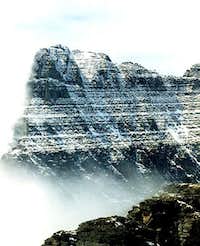 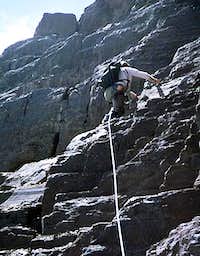 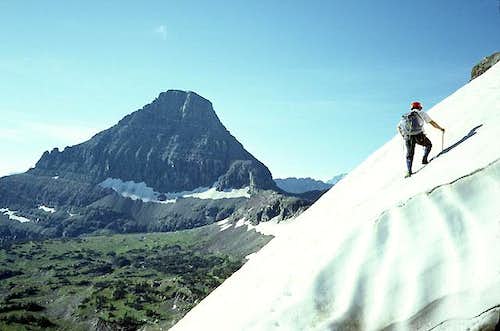 At the base of East Face.Reynolds Mountain in the background.