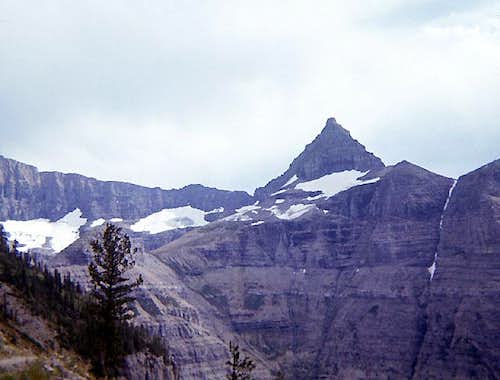 Thunderbird Mountain is a relatively remote peak located in the northwestern part of Glacier National Park. Views from the summit a spectacular in all directions and include some of the most impressive peaks in the Park. An added attraction to climbing Thunderbird is the opportunity to visit the beautiful Hole-in-the-Wall Cirque and Waterfall - named for the waterfall that starts from a cave mouth on the cliff face below the cirque. (see Photo) The official elevation given for Thunderbird Mountain is 8,790 feet. Note on the topographic map that this point is near the south end of the upper part of the mountain. The true summit is on the north end of the mountain and is probably a little higher than 8,790 feet. A CLIMBER'S GUIDE TO GLACIER NATIONAL PARK lists the elevation a 8,800 feet.

The climb of Thunderbird Mountain starts from Brown Pass which may be reached via any one of three different trails. The shortest distance from a road is about 18 miles - if one hikes the entire distance. Refer to this map: Glacier Park Trails (Click on map to enlarge after it loads) From Waterton (Canada) The route recommended in A CLIMBER'S GUIDE TO GLACIER NATIONAL PARK. The trail follows the west side of Waterton Lake south into the US, then turns west toward Browns Pass. Taking a boat from Waterton to Goat Haunt will take about 10 miles off the hike. There is a regularly scheduled commercial tour boat on Waterton Lake. Waterton National Park Web Site From Bowman Lake This approach is about the same distance as from Waterton, but there is no commercial boat service available. The trail follows the north shore of Bowman Lake, then ascends the Bowman Creek drainage to Brown Pass. Arranging for a boat ride up the lake will take about 10 miles off the hike. Motor boats of 10 horsepower or less are allowed on Bowman Lake. GNP Boating Regulations From Kintla Lake This is the long hard way to reach Brown Pass. The trail follows the north shore of Kintla and Upper Kintla Lakes, then climbs over Boulder Pass and down through Hole-in-the-Wall Cirque before climbing to Brown Pass. Motorized boats are not allowed on Kintla Lake, so any boating short cut must be human powered. 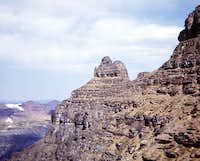 A CLIMBER'S GUIDE TO GLACIER NATIONAL PARK describes just one route, "The West Face Traverse Route" and to my knowledge, this is the only route existing. From Brown Pass, one traverses under the north face of the peak to a prominent notch in the northwest ridge through which the west face of the mountain is reached (ice axe recommended). From here one traverses south to the southwest ridge which is then climbed via a couloir to the upper part of the west face. A long northward rising traverse of the upper west face is made to a deep notch below the summit towers through which one passes onto the upper east face. A bit further north, a class 3 chimney leads to the summit. There are several towers separated by deep notches that are about the same height near the summit - the highest is the second from the north - it has (or had) a large cairn. CLIMBING ON THE ROUTE

Current Entrance Fees</a Registration for day climbs in Glacier National Park is recommended, but not mandatory. Outdoor Activity Page Includes links to boating, bicycling, fishing, etc. and the regulations applying to each. A backcountry camping permit is required. See Camping. If you are entering or leaving through Canada, you will have to deal with whatever border crossing hassles exist at the time - be sure to have photo ID. A passport is best.

June, July, August, September, and even into October depending on the amount of snow. 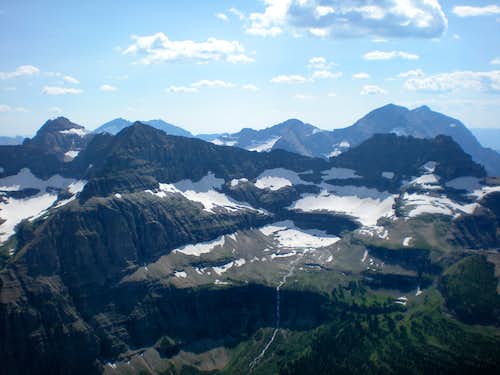