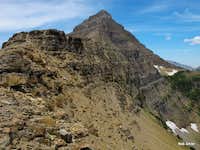 Along the 19-mile Pitamakan-Dawson Loop, truly one of the most spectacular day hikes in the entire American national parks system, hikers pass in very close proximity to, as in cresting a saddle beneath, two impressive peaks on the Continental Divide. The higher and more impressive of the two, and the one that probably attracts more climbers, is Flinsch Peak. Mount Morgan is the other, and it can be climbed as a long day outing or part of an overnighter, with the difficulty, if the easiest route is found and followed, not exceeding Class 3 (and only touching on that very briefly). If the easiest route is not found and followed, it is unlikely that the summit can be attained without negotiating Class 5 terrain.

Here's a great reason to climb Morgan aside from the fact that it's a Glacier peak, has incredible views, is on the Continental Divide, and is there: it's less than a mile from the trail and the vertical rise from the trail is only about 700', meaning that if you are hiking with non-climbers and are in good shape, you can make the climb as a side trip in less than an hour round-trip (it took me 30 minutes to reach the summit, and that was after some route-finding issues at first, and 15 minutes to descend).

Views from up top include the following: notable peaks such as Stimson (second-highest in the park), Flinsch, Rising Wolf, Tinkham, James, Blackfoot, Logan, Red, Reynolds, Bad Marriage, Eagle Plume, and so many more; at least three glaciers, including Pumpelly (tucked against Blackfoot Mountain and massive by park standards); and dazzling watery jewels such as Pitamakan Lake, Lake of the Seven Winds, and Oldman Lake. For miles and miles, you gaze west over some of the wildest and most remote terrain left in the Lower 48. 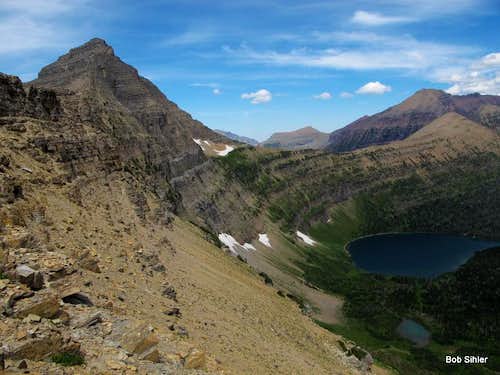 Some enjoy seeing pictures of them. Some do not, preferring to discover them on their own. As a compromise, pictures of summit views are in this page's gallery but not displayed on the main page.

You'll need to enter the park at Two Medicine, which is about 4 miles north of East Glacier Park and eight miles south of the junction of U.S. 89 and MT 49. Turn into the campground and drive to a parking area by Pray Lake, where there are signs pointing you to and informing you about the Pitamakan-Dawson Loop. 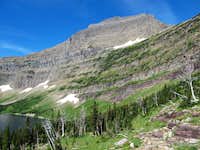 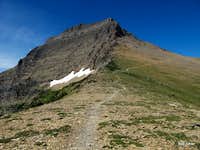 Although it's just a hike, a route page for the Pitamakan-Loop would be justified here for its amazing scenery and its summit-like views. However, I'll restrain myself and stick to what's relevant for climbing the peak.

You can hike the 18.8-mile loop either clockwise or counterclockwise, but I'm going to describe the route from the counterclockwise approach because it is shorter unless you take the boat ride across Two Medicine Lake, which cuts two miles from the loop but presents some logistical and timing difficulties.

Elevation gain: about 3600' from TH to summit, but the trail has a dip of a couple hundred feet, so add that to the total.

The trail immediately crosses a bridge spanning the outlet of Pray Lake and soon reaches a junction. Turn right for Oldman Lake and Pitamakan Pass.

The trailhead sign says it's 6.2 miles to Oldman Lake Campground, but it's actually 5.9 miles to the turnoff for the CG. At that junction, a sign says it's 1.6 mi to Pitamakan Pass.

Your next key point is what some books and signs refer to as Pitamakan Overlook. It is about a mile from Pitamakan Pass (make sure you do not bear right at the junction with the trail to Cut Bank Pass). The elevation is about 8100', you are on the Continental Divide, and the trail turns sharply south to reach Dawson Pass in a little over three miles of above treeline hiking.

Hopefully, the map below will help illustrate what I described in the preceding two paragraphs. 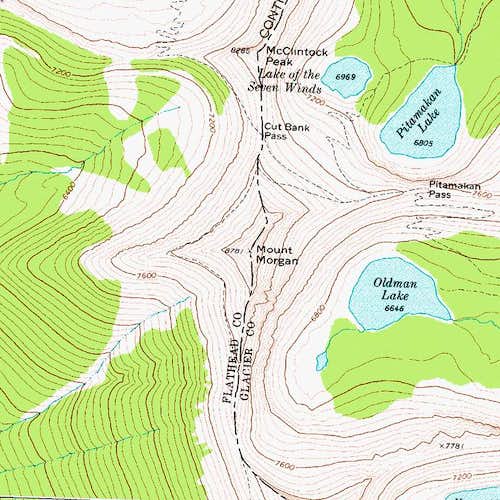 From Pitamakan Overlook, leave the trail and start heading up the ridge to Mount Morgan. As you reach the sheer cliffs, bear right and traverse south, staying as close to the base of the cliffs as you can. Soon you will reach a small pillar (first picture below), where there are at least three "easy" Class 5 options to get higher. The Class 5 pitches are not long, but they are just hard and exposed enough to make you wonder if there is an easier and safer way. There is. Continue south for a bit and look for a rock that looks like a chockstone (second picture below). To the left of that formation, use one of two breaks (third and fourth pictures below) to get through the cliffs. The going is Class 2 or Class 3 depending on the exact way you go.

Then some easy clambering gets you to the crest of the summit ridge, and the summit, where there is a cairn but no register, is a short distance away. 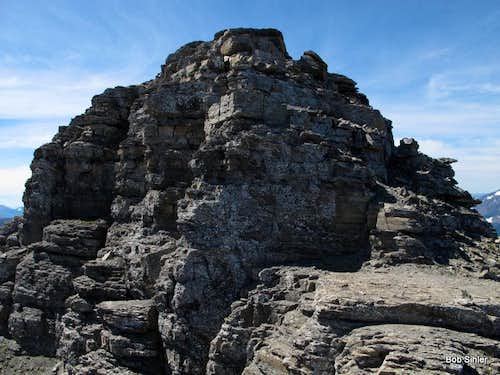 For more photos and details about this peak and others in the Two Medicine Area, see Blake Passmore's (SP member FlatheadNative) Climb Glacier National Park Vol. 2.

As of 2012, the park entrance fee was $25, good for a week. Annual and Interagency passes are available for more money but are a better deal.

The campground at Two Medicine is a nice one as large campgrounds go; it has almost 100 sites, water, and flush toilets. You cannot make reservations, and the campground was filling by early afternoon on summer weekdays in 2012. The nightly fee in 2012 was $20.

Along the Pitamakan-Dawson loop are two backcountry campgrounds-- Oldman Lake (much closer to Morgan) and No Name Lake. Both have a one-night stay limit during the summer, and you must have a permit to stay at either. Permits for these sites are not easy to get. You can try in advance through a lottery system or show up at a ranger station the day before to try to get one; if you do the latter, get there at least half an hour before opening time (7 A.M. in 2012).