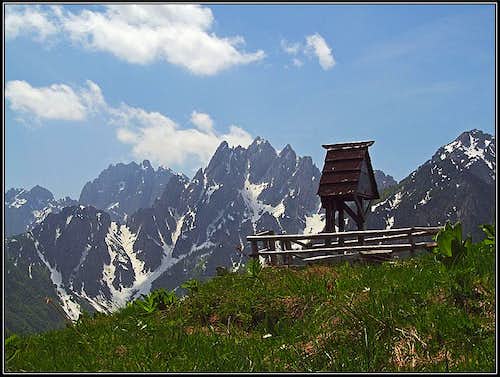 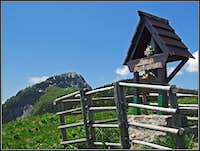 It is hard to decide which to write about - the summit, which is nothing special or the alpine meadow below it, which is just beautiful. Well, the summit has a very nice view too, so let me describe briefly both. The summit belongs to the Main Carnic Alps crest. Still, because we also decided that Monte Zermula belongs to the Main Crest. And Crete dal Cronz is rising in the ridge, which prolongues from Monte Zermula along the S-SW side of Pontebbana valley towards the SE. Crete dal Cronz is the last still noticeable and rocky summit above the town of Pontebba. The ridge, which comes from Monte Zermula, over Monte Pizzul and Monte Salinchiet down to Pontebba, is around Crete dal Cronz all forrested. Only the last 100 meters of are rocky, but on all sides quite steep. There's only one path, marked and not hard, coming on top from the north. The name of the summit comes from the ancient family name "Cronc" - people from Studena Alta, who posessed this land for centuries.

The panorama from Crete dal Cronz is interesting. The neighbouring carnic Alps and some more distant Julian Alps are well seen, as it is Val Canale / Kanalska dolina, towards the east. As a mountaineer, you will probably be most interested in the details of Monte Cavallo di Pontebba / Rosskofel south face. This huge mountain, rising more than 1650 meters above Pontebbana valley, shows us its rocky ridges, the slabs of the south face and broad grassy slopes, all disappearing in dense woods below. Its three main summits and several side ones are well distinguished, and the passages over the southern face as well. Besides Monte Cavallo di Pontebba / Rosskofel also views on Crete di Gleris and on the beautiful pair of Creta Grauzaria and Monte Sernio are worth mentioning. 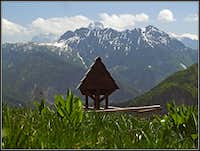 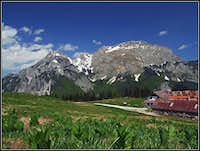 Monte Cavallo di Pontebba / Rosskofel
On the rounded hill NE of Crete dal Cronz, there's a big clearing, a perfect alpine meadow. Come there in spring, when the whole meadow is blossoming! Or in colourful autumn. It would be even worth ascending there in winter by the road - a cute cross country skiing. On the meadow the Agriturismo is operating, so the place is visited by many tourists. And the panorama from the hill is almost the same as from the summit of Crete dal Cronz, only the view towards Creta Grauzaria and Monte Sernio, and a part of the western horizon are missing. 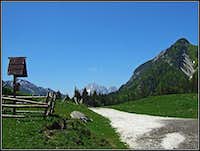 The road on Malga Glazzat
The starting point is the town of Pontebba, on the Udine - Tarvisio highway. See the main Carnic Alps page how to get there. From Pontebba you take a road towards Val Aupa, over the saddle of Cereschiatis. In the town of Pontebba don't drive into the valley of Pontebbana, nor by the road on Passo Pramollo / Nassfeld, but keep left, ascending over the slopes west of the town. Then you pass Studena Alta, Frattis and Aupa and after a few turns reach Sella Cereschiatis. Park there, or negotiate a narrow, hardly passable mountain road till Malga Glazzat Bassa. There the road is closed for public traffic. The second option to reach Sella Cereschiatis is to drive from Moggio Udinese by Val Aupa till its end. The valley is nice, but the road is quite a local one. The ascent from the west is very long, done only by those, who cross the whole mountain range. 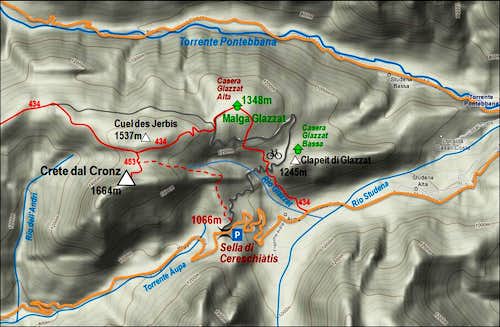 A self-made map of the Crete dal Cronz area 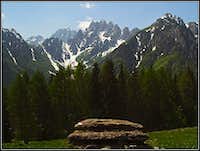 Just below the summit
Even if the hiking summit ascent is only one, the route from Sella Cereschiatis can be done as a nice and short round tour. It is probably most recommendable to ascend first on top by the direct route and then return over Malga Glazzat. Of course, if you reach the alpine meadow with a bike, you return there by the same path. A few meters above Sella Cereschiatis a marked path deters left from the mountain road. I haven't tried it (came with a bike), but it goes quite steeply first towards the north, then crosses the E ridge and on the other side ascends slowly below the N face. There the path hits the one, coming from the north, being numbered as No. 453. Turn left, ascend on the clearing, over the screes and among pine bushes, at the end quite steeply on the summit ridge and right on top. The second option is to go by the road, or the marked path No. 434 first on Malga Glazzat. A few parts of the road are steep for biking, but the return is then even faster. On the saddle, in the forrest just a few minutes before Malga Glazzat, the path No. 434 turns left. It follows a bad cart-road through the woods, reaches the saddle south of Cuel des Jerbis (also written: Ierbis), where on a nice clearing there's the crossroads. While the path No. 434 continues towards the west (to Casera Lius and further on), our path deters left, southwards towards Crete dal Cronz, which we clearly see. Soon the direct path joins from the left and we ascend on top as described above. Altogether it's a medium hard hike-up, we do good 600 meters of altitude, if going directly it's some 1 h 30 min, if going around, it's some 2 h. The other ascent option would be longer. From Val Aupa, 671 m, a mountain road (closed for public traffic) goes northwards to Casera Lius, 1277 m. There we turn right and follow the path No. 434 towards the NE and later SE. After reaching the saddle between Cuel des Jerbis and Crete dal Cronz, we go by the path No. 453 on top. That would be some good 3 hours of ascent. If a bike would be waiting you on Sella di Cereschiatis, you could again do a nice round tour. Map: Tabacco: Alpi Carniche Orientali, Canal del Ferro. 1:25000.

On Malga Glazzat there's Agriturismo. In the hut they offer all kinds of home food and drinks. There are 18 beds in several rooms. The house is opened from April till November in weekends and during summer (June till October) all days.

Crete dal Cronz can best be ascended during snow-free season. In winter the ascent depends on the quantity and quality of snow. The whole ascent could be also done with skis, but good skiing could be expected only on the upper 200 meters and on the meadows of Malga Glazzat.

The mountain is clearly higher than that!

Ah, yes! Meters/feet! Thanks a lot for spotting it so quickly! Cheers! Vid