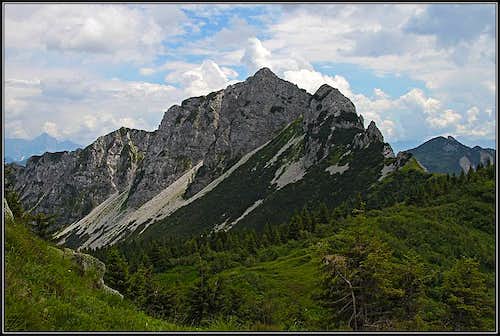 "This is quite a poor mountain", said Jasmina, after we were down and around the mountain, standing on its northern ridge.
"Hm", I was observing the sharp summit and thinking that we even haven't ascended the highest peak, that it didn't allow us to cross neither its western, nor northern slopes, and that at the end we still did reach all objectives for today. How would then Jasmina rate the even more humble Crete dal Cronz, down the crest, if she was with me the last time? No answer though. She hurried northwards and I knew we shall ascend that day Monte Zermula too.

In the crest which is from Monte Zermula winding towards the SE, down to Pontebba, there are a few more interesting summits. Monte Salinchiet is rising first, being accompanied with a few green, overgrown summits, then only above Pontebba another worth to mention summit comes - Crete dal Cronz. Monte Salinchiet is a sharp, rocky mountain, not very high, but having its weaker side only towards the south-east. In a rocky crest, which just on the SE summit changes direction, there are several bumps, the highest two - the NW peak and the SE peak - are close together and the harder reachable NW peak is higher for 1 meter. I think most of visitors ascend only the SE summit. That summit can be reached by marked paths by the E ridge and the SE slope. The area is very rarely visited and nature is unspoiled. Alpine meadows in the neighbourhood are not exploited any more, perhaps only a few hunters penetrate the dense woods and rugged ravines around the mountain. Despite its low altitude, the view from the top is very fine. Along the crests you will see also many remains from the World War I - trenches, buildings, fortifications.

Monte Salinchiet is interesting also geologically, because in contrast to the cardinal mountains of the Main Carnic Crest (and the nearby Monte Zermula) it is not made of paleozoic rocks but of mesozoic (Mid Triassic) Schlern Dolomite. That results in big friability. Strictly speaking, in geological sense Monte Salinchiet shoul be perhaps considered as part of the Creta Grauzaria - Monte Sernio group. 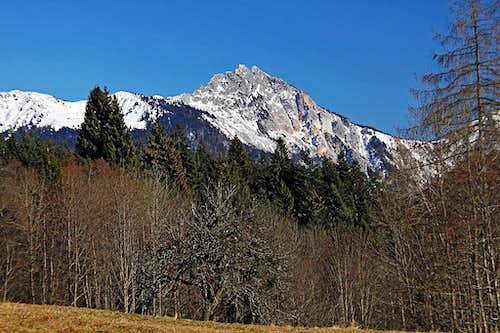 The narrow group of Monte Zermula is on the SE concluded with Monte Pizzul, 1935 m. South of it there is Forca Pizzul (saddle), 1708 m, which separates Monte Zermula group from Monte Salinchiet group. From there the ridge runs in the southern direction and has two humble elevations, 1767 m and 1739 m. After the next saddle the NW ridge of Monte Salinchiet starts. It has first a few towers, sharp, rocky and below also overgrown, then the rocky ridge rises steeply on the highest summit, point 1858 m. Beyond a notch (some 25 meters lower) there is the SE summit, 1857 m. From there the summit ridge continues towards the E-SE, having a few unimportant elevations, finally with Cuel Mat sinking below the timberline.

But the E-SE ridge is not the main one. The edge, descending towards the S is delimiting a rugged, extremely wild western face from the grassy SE slope. This edge lowers to Forca Pradulina (notch), 1492 m, below which the alpine meadow lies, and then rises on the rounded Turrion, 1632 m, further on Monte Cullar (also Chiaf da l'Omp), 1764 m, and then turning towards the east on the ridge elevation of Palon di Lius, 1707 m. These summits are not any more important, unless someone being around there, wants to pick up just everyone of them. But Monte Cullar and Palon di Lius are offering qite nice panoramas around the forrested wilderness.

Even if the road through Val Pontebbana reaches much higher, the area of Monte Salinchiet is more often visited from the western side, from Paularo town. Many people drive up to Casera Pizzul, 1532 m, where an 'agriturismo' is operating. But unfortunately from there the summit of Monte Salinchiet is not easilly reachable. The wild ravine of Rio Turriea, the sharp NW ridge and the rocky N face are preventing usual hikers to ascend on top. Other approaches are longer, so for summiting Monte Salinchiet I guess still the majority of people come from Val Pontebbana.

Different is the situation with southern summits: Monte Cullar and Monte Palon di Lius. They are more often ascended from the south, not from Paularo, but from the hamlet of Saps in Val Aupa. Those long hikes are crossing a broad forrest wilderness, finally gaining enough altitude to enjoy broad views from these rocky summits. In addition to broad views, there are still interesting remains from the World War I and in the whole area there are also many caves, I guess not yet fully explored.

The road above Malga Pizzul

The starting point is the town of Pontebba, on the Udine - Tarvisio highway. See the main Carnic Alps page how to get there. From Pontebba you take the road into Val Pontebbana, towards Passo del Cason di Lanza. The trailheads are:

Ascending Casera Pradulina from Paularo would mean starting just above the town, in Misincinis, 735 m. As said, it is possible to drive also to Casera Pizzul, 1532 m, ascend from there the N ridge and go around the mountain by its northern side. The other trailhead is Dierico, just south of Paularo.

The third trailhead is even further away. We can start in Val Aupa on some 750 m, walk by the mountain road on Casera Lius and further on Casera Palis di Lius and then continue northwards.

We would be faster directly from the valley up, instead of this long crossing, even if doing some 400 meters of altitude more, or even 600 meters more," said Jasmina. And she was right.

ganesh70: "The crossing of the two summits and the ascent from the NNW crest have both alpinistic difficulties (passages of the I and II degree on very friable rock)."

All other routes from the south and east would reach somehow Casera Pradulina. Those approaches are much longer.

The summit can be easilly reached in a day but you can also sleep on several alpine meadows. As the area is much abandoned, you also shouldn't have problems setting up a tent (if on a long-distance hike).