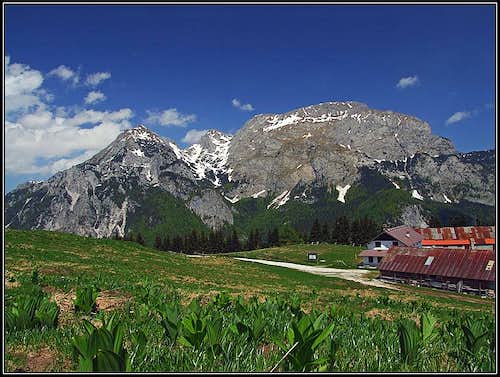 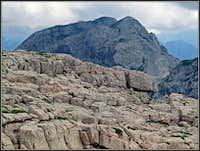 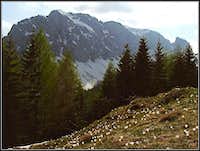 East and west of Nassfeld / Passo Pramolo saddle the mountains of Carnic Alps main ridge rise for the last time with rocky towers and walls. Creta di Aip / Trogkofel, 2280 m and Monte Cavallo di Pontebba / Rosskofel, 2240 m are standing on the western side of the saddle, while Gartnerkofel, 2195 m is standing on the eastern side.

Like in the highest part of Carnic Alps, in Monte Coglians / Hohe Warte group, also Monte Cavallo di Pontebba / Rosskofel is made of Devonian (Paleozoic) limestone. Its quality is mostly good, not too friable.

Monte Cavallo di Pontebba / Rosskofel, 2239 m, is actually a small massif, consisting of some peaks and rocky towers. On the otherwise very good Tabacco map (No. 018) the highest point of the massif is due to an error the summit of Creta di Pricot, standing a bit towards the East of the summit of Monte Cavallo di Pontebba / Rosskofel, marked with 2252 m. Its correct altitude is 2233 m. Even more towards the East, the main ridge of the massif is lowering, but the point 2203 m is still a strong rocky peak and even the last rocky elevation, Anticima Est, 1971 m, looks from the eastern side like a powerful bastion. All these peaks are forming towards the North a nice, up to 500 m high north face, which is so beautifully seen from the nice Winkel valley below it. When you reach the summit over the N wall, you find yourself on a broad, grassy plateau, and you wouldn't think that also the southern slopes of the massif are very steep and rocky. No normal route goes over them and only when going by the East ridge route, you realise, how steep and rocky also those southern slopes are.

North of the summit of Monte Cavallo di Pontebba / Rosskofel the massif ridges branch. Beyond the Notch 2025 m (Forca Clampil) two sharp towers stand, closing the upper part of the Winkel valley. These are Torre Clampil, 2079 m and Torre Winkel, 2040 m. Even more towards the NE, there's the rounded summit of Madritschen / Monte Madrizze, 1918 m, which is reached by a cable car.

The second crest branches/continues towards the West. The first high summit in it is Creta di Pricotič / Hinterrosskofel, 2225 m which is separated from the rest of massif with two notches. Mountains further towards the West are less significant and are lowering down into the Valle di Aip, while towards the South quite a strong ridge goes, culminating first in the Creta di Rio Secco / Trögl, 2203 m, and then lowering more significantly down to the Val Pontebana. In the chapter of routes description, some more side summits will be mentioned.

Also in a mountaineering sense Monte Cavallo di Pontebba / Rosskofel is very diverse. No ascent on it is just an easy hike. The easiest one is coming from the NW, from Sella di Aip / Rudnig Sattel (saddle), but also this one has a few stretches of easy climbing (UIAA I-). By the East ridge a very demanding marked path ascends, it's actually an exposed easy climb (UIAA I), protected by a fixed rope only on one (not the hardest) place. Over the North face a very nice marked route goes. It is not protected and requires on a long section (some 200 m of altitude) easy climbing up to (UIAA II+). In Torre Clampil and Torre Winkel there are two real ferratas, one of them very hard. Many ascents on side summits are not marked and all require easy scrambling or climbing up to UIAA degree II. And finally, rocky walls of the mountain massif offer also some opportunities for harder climbs. In Good conditions it is possible to ski down by the normal ascent route. Also the western summits are suitable for skiing, if one has appropriate skillls.

Like from all summits in the Carnic Alps main ridge, also from Monte Cavallo di Pontebba / Rosskofel you have a great panorama on all sides. The contrast between icy summits of Hohe Tauern on the North and rocky summits of Carnic and Julian Alps on the South is very nice. And on the West, the Dolomites mountains are clearly seen.

Below are some more pictures of panorama. 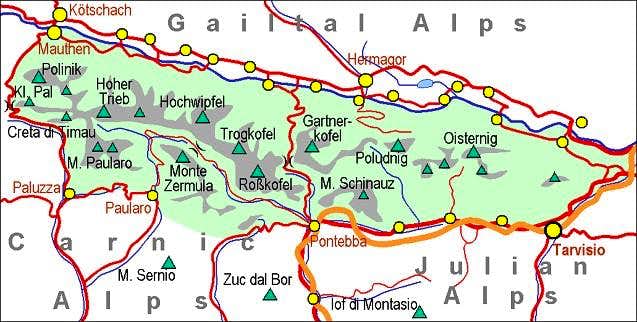 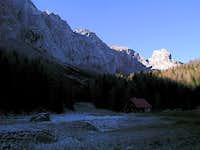 A few quick ascents come from the Winkel valley, lying on the north-eastern side of the massif. It can be reached from the road over Nassfeld Pass / Passo Pramolo. Just below the saddle, on the Italian side, there's a sharp turn (and a hut), where the forrest road deters into the valley. The road is closed for public traffic.

The second even quicker option from the North are many trails which reach the main Carnic Alps ridge from the Austrian side, from the ski arena Nassfeld. Many paths, among them the famous Karnischer Hoehenweg / Traversata Carnica, reach there, but forrest roads and alpine meadow roads on the Austrian side are also closed for public traffic. The quickest option is the upper station of Madritschen cable way, reaching 1818 m. Another good trailhead is on Rudnig Alm, 1612m, where you can come by car (toll free).

The third option are approaches from the South. They all start in the beautiful and remote Val Pontebbana. From Pontebba, lying on the Udine-Tarvisio highway, a narrow and often bad road deters towards the West into Val Pontebana. One trailhead starts in Studena Bassa village, 630 m, the other one on Carbonarie, 1055 m, the third one by the Caserute hut, 1419 m, and the last option is Passo del Cason di Lanza, 1552 m, from which a mountain road, closed for public traffic, ascends high towards the Carnic Alps main ridge - the trailhead is on 1750 m.

The whole area is very nice for hiking. You can do nice round tours, crossings of the whole massif ar just one-way and back tours. Due to high trailheads the tours are short, but from Pontebbana valley you can choose also very long ones. From Passo Pramollo / Nassfeld Pass you can also do easy and panoramic hikes along the Madritschen/Madrizze ridge. You will gain some 400 meters of altitude, unless coming with a cable-car just on top. Going by the ridge avoid the devastated areas due to ski terrains - keep more towards the Italian side. 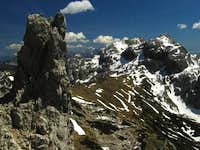 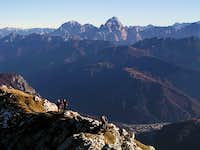 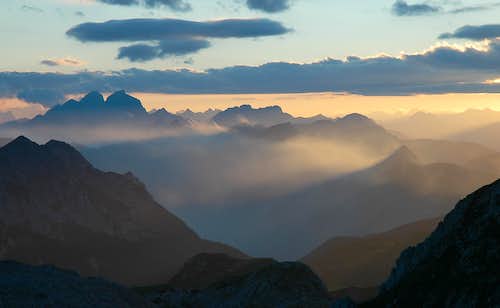 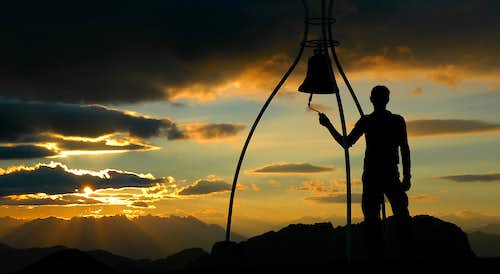 Renata - on the top

On Rosskofel one can find also many geological features. Its 300 million years "younger" rocks (from the end of Carboniferous era) are lying on older layers of limestone. In the vicinity of the so-called "Schneefinken basin", which separates the smaller side peak of Rosskofel from its main massif, on the altitude of 2,130 meters, there is the entrance into the "Klondike cave". It is the largest and longest of the four currently known cave systems in Rosskofel. The cave extends to the altitude of 1,453 m, forming different sized halls, tunnels and drainage systems. From the cave entrance in the winter warm air flows, indicating a connection with exits on the south side of Rosskofel (chimney effect). The water level in the cave varies according to season and weather. The most impressive drainage system is the "Yukon", an underground karst river at the bottom of the cave.

The cave can not be entered without speleologic equipment and experience!

To ascend Monte Cavallo di Pontebba / Rosskofel it is best to choose dry seasons. The best months should be July-October. In 2005 we also had great conditions mid November. When snow and ice covers the mountain routes might become very demanding, requiring full winter equipment.

The ascent can be normally done in one day. On Nassfeld Pass / Passo Pramolo there are many hotels, but the majority of them is opened during the ski season.