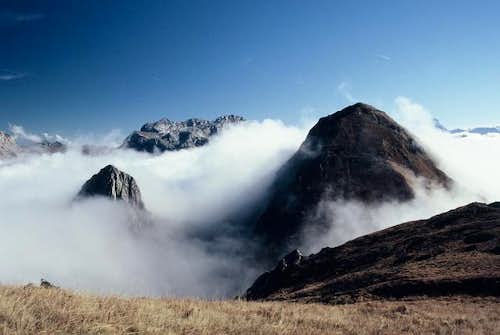 Monte Zermùla is a long ridge mountain for which we can say that it belongs to the Carnic Alps Main Range mountains (Karnischer Hauptkamm). Still, it is indented much towards the south and is separated from the main range by the broad saddle - Passo del Cason di Lanza / Lonice. It has long, grassy and on top rocky southern slopes and steep, all rocky northern slopes. Over Passo del Cason di Lanza an interesting road goes. It connects the towns Paularo and Pontebba. Even if the road is often in a bad shape, when it is passable it is much used by tourists, who are quickly brought on the altitude over 1500 meters.

The ridge of Zermùla is running in the direction WNW-ESE. Monte Zermùla is first of all the mountain of Paularo, the town, lying in the big, sunny cauldron south of it. Paularo is being sheltered by Monte Zermùla from the fierce northern winds. Hikers are often crossing the whole ridge or are ascending on top by the northern ferrata and then descending by one of the normal routes - either towards the west or east. In the northern walls there are a few climbing routes. Also a few crags in the vicinity of Passo del Cason di Lanza / Lonice are arranged for climbing. The broader area of Zermùla is also suitable for tour skiing, especially the nearby Monte Pizzul. Also the biking tour over Passo del Cason di Lanza / Lonice is a popular, quite enduring, but beautiful tour.

During the World War I the mountain was heavilly fortified. The Italian positions along the whole ridge and further on towards the E-SE neighbours can still today be very well seen.

The name Zermùla comes from the Friulian language, where the words zermùi/zermòi mean sprout (in Italian: germoglio), referring to the southern parts of the mountain, where there is also an alpine pasture with the same name.

On the west the area of Monte Zermùla is delimited by the deep valley of Torrente Chiarso, which separates it from Monte Dimon and Monte Paularo. On the terraces below the western summit (Cul di Creta) there are two beautiful alpine meadows, Zermùla and Valute, the latter one is already abandoned. Above them, already the rocky main crest begins. This one has several elevations, but is running up and down only little. Approximately in the middle there's the highest point. Then the ridge is running further, and from the last high point it drops abruptly towards the east. From below it, towards the SE, at first steep, later more flat and grassy ridge is descending - the one which continues later all the way down to Pontebba. Beyond the point 1909 m this ridge lowers down on Forca di Lanza, 1831 m (saddle). Over it the south-north passage goes, the southern part is not marked. 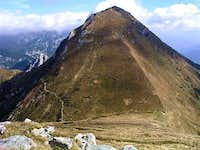 South-east of Forca di Lanza the rounded, mostly grassy Monte Pizûl, 1985 m, is rising. It also offers a nice view on Zermùla, but as an independent goal it is less important, except when the tour on Zermùla can not be done. In winter it is a nice goal of a ski tour. Of course it can be ascended by the way, when coming down from Zermùla, or, if on a long crossing we continue towards Monte Salinchiet. Otherwise the marked path bypasses it on the southern side. South of Monte Pizûl the narrow area of Monte Zermùla finishes on Forca Pizûl, 1708 m (saddle). Also on Monte Pizûl you can see many remains from the World War I. 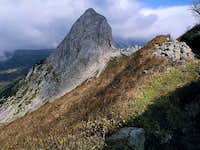 North of Monte Pizzul, so even closer to Passo del Cason di Lanza, another interesting character is rising out of the high plateau. This is the sharp rocky tower of Zuc della Guardia, 1911 m. Towards the south it drops down vertically with some 100 meters high wall on the saddle between it and Monte Pizûl. Over this wall a beautiful ferrata goes. Also the tower of Zuc della Guardia was fortified in times of World War I. Just above the saddle a big cavern reminds us on those times. From the summit on the other side, towards the north, another, less difficult secured trail goes. It is appropriate for a descent. From Passo del Cason di Lanza the summit can be reached in 1 h 10 min.

Even more to the east, there's another rocky summit: Zuc di Malaseit, 1829 m. It shows a rocky face towards the Pontebbana road and is also hosting a few WW1 ruins. It can be also reached by scrambling up from the saddle between it and Monte Pizûl.

As in most of other Carnic Alps, also the rocks of Monte Zermula were created in Paleozoic, as reef limestones or clastic deposits in shallow tropical waters. The summit rocks of Monte Zermula and its northern walls are made of Devonian limestone. This reef limestone stretches also towards the east, creating the towers of Zuc della Guardia and Zuc di Malaseit. On the southern slopes of Monte Zermula and on Monte Pizûl, however younger (Carboniferous) turbiditic sandstones and clays are prevailing, forming much more gentle slopes. The southern slopes further down towards the Paularo cauldron are geologically quite diverse. In lower regions Carboniferous rocks are replaced by even younger Permian rocks, between these belts even a belt of metamorfic basalts can be found.

On the western side of Monte Zermula the Chiarsò creek is flowing through a deep and narrow canyon, which is also geologically very interesting, revealing much of the history of these paleozoic rocks. Las Callas is the creek section west of Monte Zermula, through which a marked trail goes. Lower down the creek, there's another interesting section, where the red upper Permian "Val Gardena" sandstones, deposited on a broad river plane, can be observed.

The road above Malga Pizzul

The fastest ascent on Monte Zermùla can be done from Passo del Cason di Lanza / Lonice / Lanzenpass, (in Friulian Lanza / Lanze / Lance, which means marshy ground, the same as "lonica" in Slovenian), 1552 m, the saddle, which can be reached by a mountain road either from Pontebba, or from Paularo.

Many hikers start the tour also on the road above Paularo, the starting point is by Nelut hut, 1102 m.

The third option is possible only from Paularo, but we reach the summit as quickly as from Cason di Lanza / Lonice pass. From the town Paularo a mountain road goes through Ravinis and further on, all the way to Casera Pizûl, 1532 m, where an agritourism is operating. The road further, to Casera Paluchiàn is closed for public traffic.

1. West ridge. From the road near Nelut hut, 1102 m, by the mountain road (closed for public traffic) towards the NE (marks No. 442), then further on the main ridge and by it on top. Medium hard hike up with some scrambling, 3 h 15 min.

2. East-Southeast ridge. From Passo del Cason di Lanza / Lonice towards the S on Forca di Lanza, 1831 m. Till here you can arrive also from the S, from Casera Pizûl. From the saddle further towards the top by the right variant, which soon ascends just below the main ridge and follows it to the highest point. 2 h 15 min. This path is a bit more demanding than the normal approach (#3 below), but still and ordinary hike up (difficulty T4).

3. Southeastern (normal) approach. As described above by the route #2 on Forca di Lanza, 1831 m, from there we follow the path No. 442 across the S slopes of Zermùla till the small chapel below the summit, and from there in a few turns up to the highest point. 2 h. This path is wider and easier than the ridge variant, but hardly a few minutes shorter. Difficulty T3.

4. From Casera Pizûl. A good alternative for a short approach to the one from Passo Lanza. From the hut you first gain Forca Pizûl and then continue left on Forca di Lanza, and as in #2 on the top. 2 h. 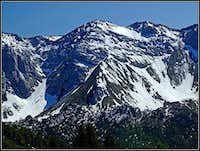 5. Via Ferrata Monte Zermùla  (Also named Amici della montagna). From Passo del Cason di Lanza / Lonice we go towards the SW across the slopes into a basin below the N wall of Zermùla . The entry on ferrata is just in line with the main summit, there, where a distinct ravine cuts the N wall. A middle hard ferrata (on the Austrian 6-point scale rated: B/C) overcomes some 300 meters, then we have a few more meters by the E ridge to the top.

6. On Monte Pizûl. As described above by the route #2 on Forza di Lanza, from there by military and animals paths towards the E (less than 150 m) on top. Easy, 1 h 20 min. Similarly, the summit is reachable also from Pizûl saddle, but that route is not recommended (steep, overgrown).

7. Ferrata degli Alpini (on Zuc della Guardia). Over the S wall of this attractive tower goes quite a demanding ferrata (graded: C), which is also very exposed, but very well secured (with a chain). This tower can of course be an independent tour or can be ascended by the way - when going down from Zermùla.

8. On Zuc di Malaseit. The normal ascent route goes up from the saddle between this summiz and Monte Pizûl. If we are on Pizûl, then we just continue down by the connecting ridge (E-NE), which is grassy, not too difficult, but requires surefootedness. The ascent on Zuc di Malaseit is then rocky, where we must scramble a bit.

3. Northern approach to the notch 2105 m (between Point 2126 m and main summit). Not recommended. By the route #2 till the rocks below the notch 2073, there derter left. Scramble and easy climbing (UIAA I).

5. Main summit from the NE. Not often used, easy climbing of UIAA II, not marked. You enter the northern ferrata, climb by it some 40 m, then deter right and climb directly over the NE face. 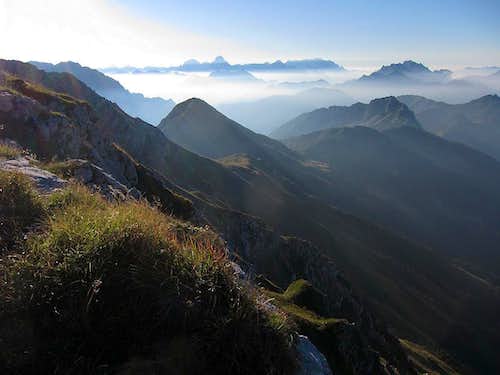 In the northern walls of the main summit of Zermùla, and especially of the Eastern summit there are quite some classical climbing routes. Here they are listed from W towards E:

The ascent on Zermùla can be easilly done in one day, so mountain huts are not needed. All of them are reachable by car:

Casera Pizûl, 1532 m, on the other side of the mountain. It can offer 30 beds. Approachable by the mountain road from Paularo through Ravinis.

To ascend Monte Zermùla it is best to choose time of a season, when the slopes are not under snow, in summer and autumn, roughly from June till October. In wet, snow or even icy conditions the steep, grassy slopes can also be dangerous. With appropriate equipment Monte Zermùla is also a nice winter goal. The nearby Monte Pizûl is a perfect goal of a ski tour, only the road on Passo del Cason di Lanza is almost never cleaned in times of tour skiing (usually much later, because the road hardly avoids avalanche devastations).

The originator of this page was DragoA. As he left the page long time with only a minimum of information and didn't respond to e-mail with collaboration appeal, the ownership of the page was transferred. However, he is all the time welcomed to build the page. The other member who knows the area well - Fabrizio, has also editing rights.