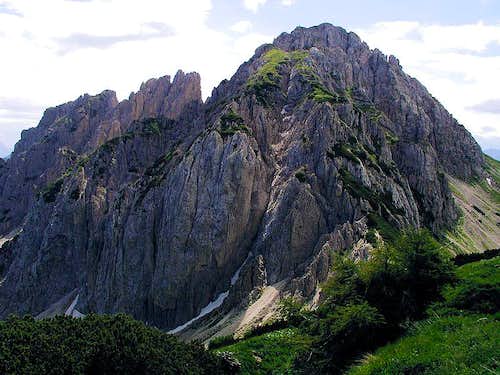 It's a popular promenade summit, this Gartnerkofel. No wonder, it rises above a high mountain pass and from the pass over half of Gartnerkofel's slopes also in summer a chair-lift operates. But it offers more than just an easy and short walk-up. A broad panorama of course, but more also in terms of outdoor activities.

The ascent over its NW ridge is a nice, very easy climbing route. In winter, despite of one of the biggest ski arena (Nassfeld) in Carinthia nearby, the tour ski descent from the summit is still a pleasure. And if you have the logistics and decide to ski down towards the north, you already have a real tour. In summer, for a real hiker, the ascent from Moederndorf parking place, 612 m, through Garnitzenklamm (canyon), on Kuehwegeralm (1480 m), Kuehwegertoerl (1914 m) and by the NW ridge to the summit would be one of the finest in the region – due to its variety, big elevation gain and at the end already easy climbing details.

In the northern towers of Gartnerkofel, In the western walls and in the walls of Gratnerkofel's south ridge there are also many harder climbing routes. See below their list. In 2014 also a new ferrata was opened in the rocks of Däumling, completing the touristic offer of the Nassfeld area.

As a curiosity - the summit also has its Slovenian name: Krniške skale. Not so long ago also the lower part of Zilja valley was partly populated by Slovenian people.

The geography of this small massif is seen on the map below. The summit has two heads. Towards the North many ravines are falling, separated by wild rocky ridges. The NE ridge consists of three towers, named Gartnerkofeltuerme. The NW ridge is similar, but more compact, finishing on Kuhweger Toerl, 1914 m. More towards the NW, there's the easily reachable summit of Kammleiten, 1998 m. This ridge is sending three ravines towards Nassfeld, between them rises an interesting tower, called Wilderturm, 2100 m. It's a popular climbing goal, but offers no easy ascent for hikers. The northern face of Kammleiten is a rugged, 640 m tall wall, called Reppwand. It's like an open book of geology, revealing in a clear succession 5 rock formation from 270 million years old Permian limestone to Upper layers of Triassic limestones.

South of the main Gartnerkofel summit a separate ridge is stretching in the W-E direction. On the other side of the saddle there's first the Suedgipfel (South Peak), 2154 m. A rocky ridge is then going towards the E and finally reaches Kuehwegerkofel, 2136 m. 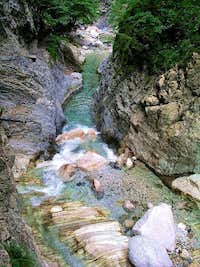 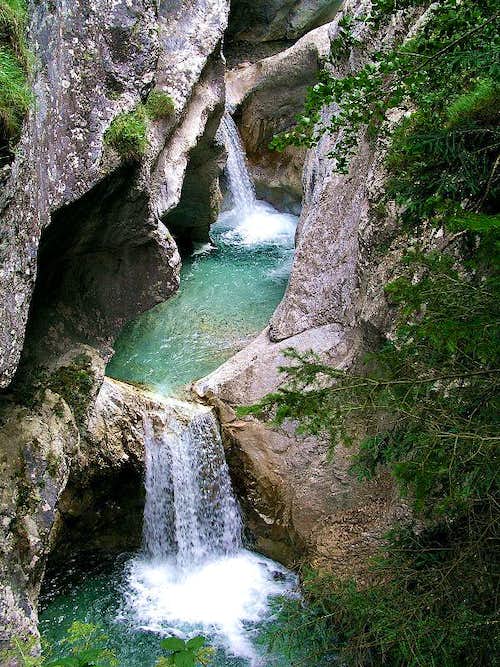 North of Gartnerkofel there is a nice 6 km long gorge, through which Garnitzenbach (creek) drops some more than 500 meters. Nature in this gorge is really beautiful. Cute cascades, waterfalls, ponds, more than 200 m high walls on both sides, plenty of flora and fauna. As the gorge is situated on the Permian-Triassic boundary in the Carnic Alps of Austria (Gartnerkofel-Region), the variety of rocks in the gorge is very big, especially, because the creek carved a deep valley also in very old Paleozoic rocks, dating back as far as 460 million years (Ordovician). These can be seen already at the very beginning. The whole canyon is proclaimed a natural reserve.

The trail through the gorge was built already in 1891 (first part), rebuilt in 1900 (the whole gorge) and is now regularly maintained. For the hike through the gorge you would need some 2:30 h-3:00 h, plus some 2:00 h for the return. Of course you can shorten the hike at any of its four stages. It is worth to mention that the last part is more demanding. Even if well protected, some passages are exposed and require a safe step. Also the hike is not recommended after a very heavy rain, because it can become dangerous. As the price is 5.3 EUR for adults, consider going up along the canyon western edge, entering it higher on and then returning by the canyon bottom! That requires an additional orientation effort. 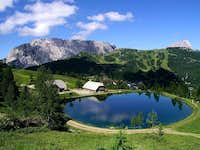 In 1799 F. X. Wulfen discovered on the slopes of Gartnerkofel an endemic flower, now named after him. In Alps this is the only place where it can be found. Otherwise it grows also in Montenegro, Albania, Syria and Himalaya. Early in summer (in 2006 it was on July 2nd) each year a day of wulfenia is held. On that day you can see people wandering around in groups, doing some amateur botanizing.

Just by the Austrian road on Nassfeld Pass, there are two small lakes, called Bodensee. The area is nice and arranged for tourists visit. It's also one of the geopoints of Carnic Alps Geoparc, explanation tables will teach you about the surrounding rocks and about how the lakes are remains of the last ice age (Würm, 70.000-10.000 years ago) and at the same time how they are fed by sources of water which through its underground flow hits slate layers. 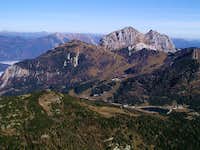 As the most obvious starting point Nassfeld Pass / Passo Pramolo, 1530 m, can be reached either from the Italian or from Austrian side. If coming from Italy, we leave the Udine – Tarvisio highway in Pontebba, and drive from this town towards the north. If coming from Austria, we turn near Villach towards the West and drive into Gail/Zilja valley. Just after Hermagor/Mokrine you leave the regional road and take a road, which ascends the pass towards the south. On this side of the pass in winter there is a broad ski arena – with many cable cars and chair-lifts. It is referred as Nassfeld ski arena or Sonnenalpe ski arena.

When reaching Nassfeld Pass / Passo Pramolo you can drive up the hill by a mountain road till Plattner Haus, 1625 m (on Watschiger Alm). From there the summit can be reached in 1:30 h. And there's yet another option. From below the pass (on Austrian side) a chair-lift can bring you up the hill till the altitude of 1880 m. To the summit there is only some 45 min walk-up.

Garnitzen Klamm (canyon, gorge) can be entered from below from Moederndorf. You turn in Hermagor/Mokrine towards the south and drive till the end parking place on 612 m.

The summary of hiking and scrambling routes, graded by hiking standards. If you know more routes, please let us know.

1. South-west approach. From Watschiger Alm, 1625 m, or from the upper station of Gartnerkofel chair-lift, 1880 m, to the saddle between the south summit, and the main summit, from there to the top. 1:30 h from Watschiger Alm or 0:45 h from the chair-lift station. Easy (T2), marked.

3. Through Garnitzenklamm. From Moederndorf parking place, 612 m, through the beautiful Garnitzenklamm (gorge), on Kuehwegeralm, 1480 m, further on Kuehwegertoerl, 1914 m, and by the NW ridge to the summit. Descend on Nassfeld Pass / Passo Pramolo, where the deposited bike is waiting for you! Zoom down to your car! Great tour, combining a beautiful gorge, alpine meadows, easy climb (T5) and joyful bike descent. Good 6 hours of ascent, all the route is marked!

5. Gartnerkofel Southern Summit. Its also reachable in a hike-up from the saddle between it and the main summit, where we reach from Watschiger Alm or from the upper station of chair-lift. On the saddle we turn right. The trail (not marked, but well beaten) crosses a rocky rib, then by a grassy and rocky terrain across the slopes and towards the E on the ridge. Finally by a pathless terrain on top. 1 h 30 min.

6. Däumling ferrata. This summit is rising in the SW part of Gartnerkofel's Southern ridge, just above the chair-lift station. The ferrata is overcoming 150 m of altitude, for what we need some 45 minutes. On the Austrian scale its difficulty is C (middle). After reaching it's top, we can simply continue on the summit of Gartnerkofel (15 min more).

7. Nassfeld ski tour. Over ordinary ski slopes from Nassfeld Pass / Passo Pramolo (or by chair-lift). On the upper part the same as #1. From the saddle 2 hours. Medium hard ski tour (only on top a bit steeper).

8. Ski tour over Kuehwegeralm. Start on Nassfeld Pass / Passo Pramolo and ascend the summit like in #4 (2 hours). From the summit ski down by the ascent route only till the saddle between the main summit and the Suedgipfel, 2154 m. There turn left, towards the SE, and ski down the nice valley. Where distinct rocks are splitting the valley, take the left passage (towards the N) and ski down to Kuehwegeralm. From there use a mountain road to ski down in Gail valley. If you don't have two cars, go to the ski arena and take a cable-car up to Nassfeld Pass / Passo Pramolo.

In addition to the above listed more popular tours, there's a lot of other scrambles and easy climbs, for example: 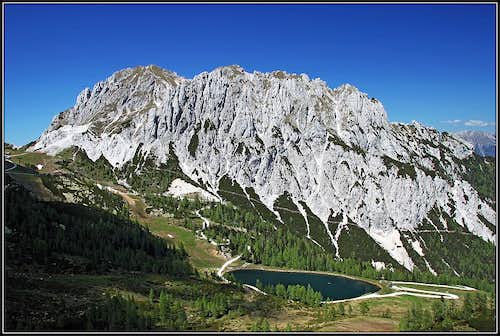 No restrictions. The entry to Garnitzenklamm must be paid.

For the usual ascent no hut or camping is needed. Otherwise on the Nassfeld area there are many hotels and private pensions. In Gail valley there's a tourist resort at Presseger See, with an official camping place. The northern ascent is considerably longer. I have no information if sleeping would be possible on Kuehwegeralm. In the middle of Garnitzenklamm there is a shelter, where you could sleep in emergency (high water or impossible escape from the gorge). But it's only one good hour of walk from the starting point, so no big use for the mountaineering ascent.

Gartnerkofel can be climbed any time of the season. In winter the upper slopes require some care and a proper equipment. Live cam: here.