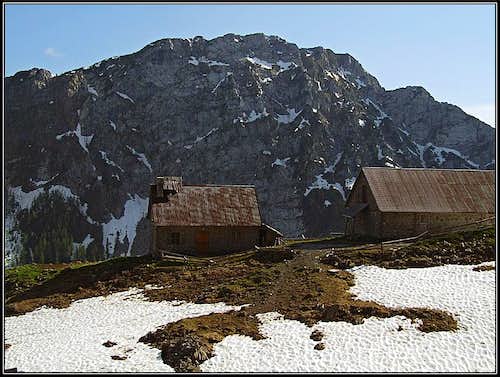 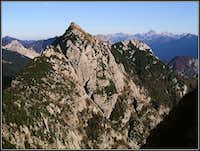 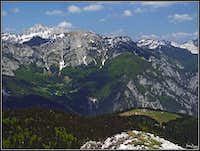 The name probably originates in the Slovenian: mali vir (=small source). That was the name of now decayed shepherds huts which gave the name also to the mountain. Uèrc is a toponyme which appears also elswhere in these mountains, always meaning 'water source'.

East-southeast of the big massif of Monte Cavallo di Pontebba / Rosskofel a smaller and lower massif of Monte Malvuèric (Malurch in German) is rising. As those mountains are steep and rugged, one must drive from Pontebba high towards Passo Pramollo / Nassfeld Pass to see Malvuèric in all its splendor. It actually is a beautiful, steep ridge mountain, mostly rocky, sending towards the south and south-east several rugged branches.

The main ridge goes in the WNW-ESE direction. From Monte Cavallo / Rosskofel Malvuèric is separated by the Pridola saddle, 1644 m. Geographically it is the same crest, of course. As said, the summit is rocky, so that the west-northwest ridge even pushes the ascent path into the northern face. The east-southeast ridge is more gentle. On its southern slopes there are nice meadows where still sheeps are kept. The slopes further down towards Pontebbana and Bombasso creeks are then again quite rugged, rocks are covered with steep forests and deep ravines are cut between the ridges. In the upper part, south of the main ridge and the highest summit, Monte Malvuèric Alto (High Malvuèric), another panoramic summit is rising. That is Monte Malvèeric Basso (Lower Malvuèric). A good path visits it and a comfortable marked path crosses its southern slopes all the way to Pridola saddle.

Malvuèric offers a very nice crossing tour. If we prolongue it all the way to the summit of Monte Cavallo / Rosskofel we get probably the most beautiful hike (scramble) in the vicinity of Passo Pramollo/ Nassfeld Pass. Vistas from the route and the summit are exceptional - on the neighbouring higher summits, towards the south and towards the south-east on Julian Alps. During the World War I also Malvuèric was heavilly fortified. We can still see the remains of buildings on Pridola saddle.

Let's first only list the routes. There are four obvious ones but other combinations are possible too. Times, alevation gains and short descriptions can be seen and calculated by clicking on the above map.

M. Malvueric by the E-SE ridge

Above Forca Glome in the E-SE ridge

Start: Parking place on the main road above Tratten, 1290 m.
General info: Marked path, difficulty of hike up is T3 (short ferrata below the notch), 630 m.
Times: 0:50 from Glome notch, 1:40 from the road.
Description: It is best to do the round tour over Malvueric in the clockwise direction. So, we start it on the road on 1290 m of altitude, just above Tratten alpine meadow. By a forrest road we descend down to Winkel creek. There the road branches. We go by the left branch (blu-orange marks) across the creek and a few meters downwards, but already at the walls of a house ruine (Prati di Stampoden) we deter right and up the slope. This start of the path is not just easy to notice, we have to find the blue-orange marks of Alta Via C.A.I. Pontebba. After we hit the marked path we have no more orientation problems. The path leads us up towards the rocks of Malvueric, first through the woods, then left across a rubble slope. The in-between target is the distinct Glome notch in the E-SE ridge which is clearly seen already from the road. Just below it there is a steep ravine with a rocky step. A good steel ladder and a few meters of cable help us to climb up. Immediately above the step we already reach the notch - we find ourselves on a beautiful place, on a panoramic spot above mountain meadows, 1605 m.

Hiking up the E-SE ridge

We did half of the ascent. Now the path turns sharply right and goes over meadows and light woods comfortably up towards the summit. It keeps all the time south of the main ridge. Above we pass a cute water source, then in a few turns the path winds up and almost reaches the ridge. Just below it, the path crosses a ravine, we step over the fence and ascend further on the nearby saddle between the main ridge and the lower Malvueric (Monte Malvueric Basso, 1814 m). From the saddle we go right up on the main ridge and on top.

M. Malvueric by the W-NW ridge

In the N face

Start: Pridola saddle (Road trailhead is on the parking place below Passo Pramollo, 1461 m.)
General info: Marked trail, difficulty UIAA I (T4), 250 m (totally 450 m).
Times: 0:45 (from Pridola pass), 1:30 (from the road), 3:55 (from Studena Bassa).
Description: From the main road we go by the forrest road into Winkel valley. The beautiful meadow with Baita Winkel we reach in some 10 minutes. From the meadow we go left across the (dry) creek bed and by a broad mule track (path No. 433) on Pridola saddle, 1644 m. From there a good and in the beginning easy marked (blue-orange) path leads us left up, on the ridge of Malvueric (don't continue by the path No. 433 around the mountain). Over a rugged karst terrain the path is winding some time, searching best passages, then it starts ascending more steeply, keeping on the southern side of the ridge. We must soon climb over a few steeper parts (diff. I-), but the path is nowhere exposed. With some care we ascend a small notch in the ridge (1790 m). Above the notch the ridge is rocky and sharp, so the path must cross into the northern slopes. There it is narrow and exposed (diff. I-), requiring quite some care and a safe step. After crossing the rocky section the path starts ascending again. It is getting more and more steep, we must occasionally already start using hands (diff. I-). This section requires most care, especially if we are descending by this path (because those are the first harder details on the hiking tour). But is is still only a hike. We see the main ridge just above us and reach it soon. By a sunny band the summit of Malvueric is not far away. Now let's enjoy a few summit views:

The Source and the Bull 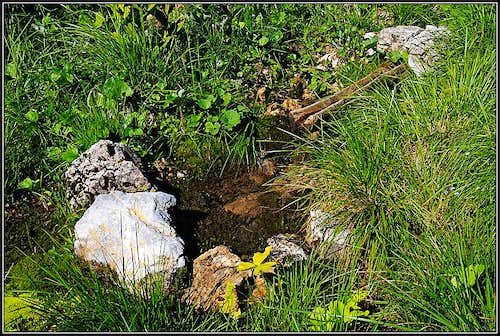 Only high on the slope I realised that I forgot in my car all water. Not all liquid though, I had two beer cans, but this was promising to be a hot July day! The path towards the summit goes over gentle slopes, oriented towards the south. There are nice meadows among white limestone rocks and dwarf pines. Then I hear gentle sounds. A few meters below the path there is a cute water source. I wouldn't had noticed it unless she called me, singing a silent melody. What a gift of Nature and People that source is! Only a simple wooden gutter and a few stones, encircling a bowl of cold, crystal clear water, but still, the most beautiful scene I would wish at that moment. I sit by for a short time, then like a Muslim do a pray to the water goddess and after a few minutes we friendly say farewell. How we were needed each to the other! She to me, a thirsty hiker, and I to her, vanishing among the rocks. Later on, I was wandering around those mountains quite clumsilly. Instead of climbing Monte Cavallo from Pridola saddle directly, I descended into Winkel valley - again to the water. It then rose my morale so much that I went up the valley, just to have a look. But still had the second beer with me, its round came on top of Cavallo. At the end of the tour I almost had a fight with a big bull on Madritschen ridge. I suddenly heard sounds of a heavy animal running after me, actually bulls were two and there were no signs that the first one was just kidding. I started swinging my trek pole, but no effect, he even didn't start loughing. So I started to swing so quickly with that pole before his nose that its whistling noise stopped him down. Only one more step further he would make and he would get a sharp punch on his nose. But then I would start running, because, what is such a pole to a strong bull! He slowly turned away and I walked further on, when - he was running after me again. And we repeated the "fight".

On the mountain there are no mountain huts. All ascents can be done in one day or half of a day. For further information about sleeping in the area, see the parent area page.