West of Trogkofel / Creta di Aip the main crest of Carnic Alps (Karnischer Huptkamm) lowers considerably and becomes less rocky. As on so many places in Carnic Alps the geological structure changes abruptly, resulting in interesting natural scenery. As we described on the page of Hochwipfel, on the summit of Schulter / Creta di Lanza an important ridge deters towards the north. But from Shchulter / Creta di Lanza to Trogkofel massif there's still quite some land and in this part of the main crest the main summit is Ringmauer / Pale di San Lorenzo. Actually, it's a nice summit, in summer easy, but in winter conditions you should not just allways take it as an easy objective. Nice panorama is guaranteed and in winter and spring it's also a goal of excellent ski tours.

The view from the west

On Schulter / Creta di Lanza the main crest turns from the W-E direction towards the south. At the end of its short south ridge there's a high saddle, 1970 m, crossed by a marked path. There starts the small group of Ringmauer / Pale di San Lorenzo. Just south of that small saddle there's an unamed Peak 1997 m, just a harmless, small grassy summit in the ridge. There the main crest turns towards the SE and soon ascends on the main summit of Ringmauer / Pale di San Lorenzo. Towards the SE it sends a long, flat ridge, actually being the main Carnic Alps crest, which has quite steep southers slopes. The whole scene makes an impression of a round wall, what the word Ringmauer actually means. The ridge then loses its character and lowers down towards the east, towards Rattendorfer Alm (alpine meadow). The last elevation in it is Huettenkofel, 1810 m, quite above the meadow. But the main crest of Carnic Alps continues from the Ringmauer / Pale di San Lorenzo ridge further towards the SE, lowering on a long, grassy saddle, with the lowest point at 1783 m - Rattendorfer Sattel / Sella di Val Dolce. There this small group ends. And finally, there's one more small summit to mention - just south of the main summit there is a small bump of Cima di Lanza, 1893 m. Between it and the main summit the main long distance hiking trail goes - Traversata Carnica / Karnischer Hoehenweg. Also Cima di Lanza is rocky on the southern side, but easilly reachable from the north. From the saddle between Schulter and Ringmauer, a long ravine (Schwandgraben) descends towards the east, ending quite below Rattendorfer Alm. If used for descent (or skiing down), you should exit it on some 1630 m towards the right and find there a cart-road, leading down to Rattendorfer Alm.

The broad saddle towards the massif of Trogkofel / Creta di Aip is also an interesting landscape. It's a high, slanted plateau, partially karstic and modified by glaciation of the last ice ages. Among its interesting features the basin of Val Dolce and the cave (sinkhole) of Grotta di Attila can be mentioned.

The most impressive is the view on the neighbouring Trogkofel / Creta di Aip. Towards the west the panorama is completely opened and very broad. Towards the north we can nicely overlook the slopes of Schulter / Creta di Lanza and of Hochwipfel. On the southern horizon the view on Monte Zermula is also nice.

For general overview, see the Carnic Alps group page and the Carnic Alps Main Ridge (East) subgroup page. Gail/Zilja valley on the north can be reached from Villach (highway), driving towards the west. Paularo can be reached from Tolmezzo (highway), driving towards the north and then deterring north-east in Val Incarojo. Pontebba lies by the Udine-Villach highway. All the three trailheads below may not be reachable by car in times of tour skiing.

1. From Straniger Alm, 1492 m. The meadow can be reached by a narrow, but still solid mountain road, starting in Stranig in Gail/Zilja valley. It is opened for public traffic from June 1st till end of September. From Straniger Alm the mountain road continues to Klein Kordin Alm, 1624 m. I nowhere saw any signs prohibiting the drive, but it is a bit untasty to use noisy vehicles so high on nice mountains. This is the western approach.

2. The second approach from the Gail/Zilja valley brings you on the eastern slopes. The mountain road starts in Rattendorf and brings you up on Rattendorfer Alm, 1531 m.

3. The third approach comes from the south, from Passo del Cason di Lanza, 1552 m, reachable by a nice mountain road, which encircles Monte Zermula, thus connecting the towns of Pontebba and Paularo. The road is usually opened from end of April till end of October. 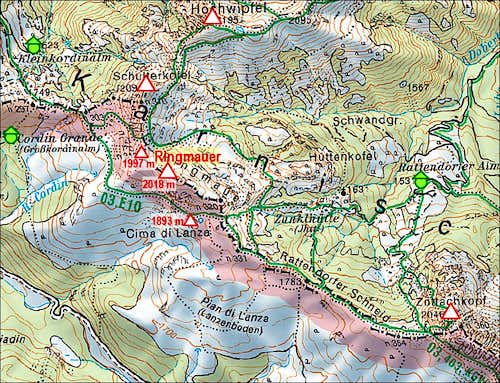 While in summer conditions Ringmauer / Pale di San Lorenzo is quite easy to ascend, in winter conditions or in time pressure some normal care is needed. Traversata Carnica / Karnischer Hoehenweg crosses its southern slopes, but does not go on top. Ascending from it the summit ridge (SE ridge) is not difficult, but on steep grassy slopes, intermitted with some rocks you need some care. The path 417 encircles the main summit by the northern side. That one is easy and not steep, ideal also for skiing. But if you want to return on the southern side, you must again find a passage over the "Round Walls - Ringmauer". There's one where the marked path goes and in hard snow it should be used. Other passages may be steep and more challenging.

Otherwise the ascent descriptions are simple:

You go north, following the mountain road (closed for public traffic) which later turns into Val Dolce. Or you can follow the marked path left of it. The direction is towards the north. Gentle slopes, so ideal for tour skiing (called Pian di Lanza) bring you on the main ridge, west of Rattendorfer Sattel / Sella di Val Dolce, 1783 m. On the left you see the main summit, its SE ridge and south below it the bump of Cima di Lanza. When you approach closest to the SE ridge, you have three options. You can ascend over steep grassy slopes directly up on the main ridge. The second option is, to go a bit left (westwards) and ascend on the main ridge by the slopes more opposite to Cima di Lanza (this is the recommended ski touring route). A bit higher slope, you'd go also above short rock sections, but perhaps even less steep. The third option is to descend by the marked path (No. 417) towards the E-NE (towards Rattendorfer Alm). So you lose good 50 m of altitude, but remain on the marked path. After it crosses the E slopes and ascends through the passage up, you can turn left and ascend by an easy, pathless terrain the summit ridge.

Summer ascent: You allways follow the marked path No. 417 towards the west, but before it reaches the main ridge, turn right towards the north and ascend up (like for Hochwipfel ascent). Then by an easy, pathless terrain on the summit ridge and on top.

The easiest ski tour from Rattendorfer Alm can be done via the normal route over Rattendorfer Sattel / Sella di Val Dolce, 1783 m. So, we first ascend towards the SW to Scottikapelle (chapel) and Zanklhütte and then towards the south on the saddle. Then by the Italian side over the SE slope on top. But skiing down is also posible directly from the summit towards the east. After following the SE ridge to the point where the Italian ascent route gains it, we turn left and ski till above the walls of Ringmauer. Two passages are leading through the walls. The western one is more recommendable. From the basin W of Hüttenkofel we then continue into the ravine which leads down to Scottikapelle. And the third option to ski down is from the summit northwards and then by the Schwandgraben towards Rattendorfer Alm (we leave the ravine on 1630 m). All the three variants for skiing are steep and in hard snow require good skills and orientation.

As described on the Hochwipfel page, you go first on Klein Kordin Alm (road, path takes a shortcut), then continue up on the main crest and by Traversata Carnica / Karnischer Hoehenweg a short section towards the east. If you'd continue further, you'd soon find yourself below the southern slopes, over which you'd then ascend on top. But you can also deter left and reach by a marked path the high saddle, 1970 m, south of Schulter / Creta di Lanza. I don't know how the ascent from there (over the Point 1997 m) directly on top would go, but you can certainly go from the saddle by the path No. 417 on the northern slope and then by it easily on top. That's also the approach if you would be arriving from the summit of Hochwipfel.

Skiing can be done from the main summit towards the north, preferably continuing down on Rattendorfer Alm. In good conditions you can also ski down the summit ridge and then towards the south. The passage is steep, but southern orientation of slopes makes the ski tour easier. Then you continue down on Passo del Cason di Lanza. By the summer approach route also skiing on Klein Kordin Alm and further on Straniger Alm is nice.

On the surrounding alpine meadows there are many private huts, where you can eat and drink. The bigger mountain huts, reachable by car, where you can also sleep are:

Any time of a season. In a hard winter a few parts of paths can become dangerous, as it was warned in route descriptions. Ringmauer / Pale di San Lorenzo is also a beautiful ski tour destination.