The focus of descriptions is the narrow area of Poludnik, the most attractive hiking goal in the broader area. But until the mountains of Monte Acuto chain don't get their own page(s), let me mention some basic information here.

The mountains east of Gartnerkofel are in a mountaineering sense less important. But nevertheless some of them are nice characters, first of all offering great panoramas, in summer easy hikes and in winter nice ski tours. One of those is also Poludnig, a respectful grassy pyramid, dominating its famous alpine pastures. Yes, large pastures are those which attract visitors, so they are also the core of all tourist campaigns in the neighbourhood. To hikers and bikers there they offer the original Gailtal cheese and other specialties. The terrace north of Poludnig is a beloved destination of people from Gail / Zilja valley and of tourists staying there.

The geography of Poludnig's narrow area is not worth elaborating much. These hills are separated one from another by not so deep valleys, cutting the territory in all directions. As a mountain, Poludnig is unique. Its summit pyramid has similarly steep slopes on all sides, except towards the West, where it is sending a longer ridge towards Schlosshuettensattel / Sella del Poludnig, 1452 m. On the SW a nd S side, the group is bordered by Rio Malborghetto and its tributary Rio Auernig, on the SE side there is the upper valley of Vorderberger Bach. The 600 m of its northern slopes finish on a nice, broad terrace with a small lake - Egger-Alm-See, and large alpine meadows. Two settlements are on these pastures: Egger Alm, 1422 m, and Dellacher Alm, 1365 m, being some 3,2 km apart. The third settlement lies much higher: Poludniger Alm, 1709 m, is already on the NE ridge of the mountain itself. It is also the highest point, reached by the road. Other pastures are more remote.

From the state border between Italy and Austria and so from the main ridge of Carnic Alps, in the area of Poludnik towards the south two long valleys are descending. These are the valleys of Rio Bianco and Rio Malborghetto. Between them, in the NNW-SSE direction an equally long mountain range is stretching. Its highest, and for hikers the most attractive, point is Monte Acuto (Slovenian: Veliki vrh or Špik), 1781 m. These mountains are very rugged, ruined by landslides, remote and mostly quite hardly reachable. Their visits are very rare. The lower part of Rio Bianco is proclaimed a natural reserve and its visit is forbidden (allowed only with accompanying authorised person). The whole area is mostly forested, reachable by deteriorated cart-roads, which only locals are using. The summits of the ridge (starting on the NNW) are:

Zielkofel / Zillen di Mezzodi / Čela, 1824 m, is rising just north of the sources of Rio Bianco and E of the upper Garnitzenklamm. Its N foresummit is Zillen, 1760 m. Towards the SE, the next summit is Cima di Mezzo, 1754 m and then Monte Acuto, 1781 m. From the highest point the rugged ridge continues towards the SE over Cima Gail, 1705 m, and Cima dei Cacciatori, 1645 m. S-SE of this one, there's a saddle, called Sella Clinach, 1466 m. It's an important orientation and logistic point where also a forest road reaches. Then the long ridge continues towards the S-SE, over Monte Cucco, 1598 m, till its end on Alpe Piccola, 1304 m.

After the narrow »passage« south of Gartnerkofel the paleozoic caracter of Eastern Carnic Range continues towards the east over Poludnik. Its summit is built of very old Devonian limestones, the oldest ones north of the summit (and just above the moraine terrace of Egger Alm) are even slightly metamorphised. The slopes of Poludnik more towards the south are however built of Carbonian shale and sandstones (Hochwipfel Formation). They stretch till the ridge of Gaisrücken and then its southern slopes are made again of older Devonian limestone and dolomite.

The chain of Monte Acuto is however all built of younger, brittle Middle Triassic Schlern Dolomite. That's why those mountains are showing the same rugged appearance as Monte Scinauz massif even further to the southwest.

Poludnik is accessed almost exclusively from the Austrian side, from the valley of Gail / Zilja. Near Villach (highway) turn towards the West and drive into the valley till Hermagor / Šmohor. There turn towards the South into the village Moederndorf and through it, following signs for Egger Alm and Garnitzenklamm. When reaching the gorge entry just proceed by the asphalted road, which turns sharp left and starts ascending. It soon brings you up on the Egger Alm terrace.

1. Poludnik Bike & Hike tour. If you start in Moederndorf, 580 m, you can bike up by a good, 95% asphalt road to Poludniger Alm, 1709 m. Then you do additional 300 m of a walk-up, which means a fine 1500 m tour. Descent is of course a pure joy. If that's too much, you can drive by car up to the big parking place below Egger Alm, 1360 m, do a biking tour on Poludniger Alm, 1709 m, and hike-up the rest. Still some 700 m of altitude to do. The Egger Alm terrace is a true bikers' paradise. Many of them ascend from Gail / Zilja valley only till here, proceed over the terrace and descend by a forest road or cart-road towards the East.

2. Poludnik simple hike up. You park on the big parking place below Egger Alm, 1360 m, and take the direct marked path by the West ridge to the top of Poludnig (via Schlosshuettensattel, 1451 m). 640 m of altitude to do. On the map, the road to Poludniger Alm is described as closed for public traffic from Dellacher Alm, 1365 m, on. But in July 2006 people were driving up freely. So, you can perhaps want to park on 1726 m, above Poludniger Alm, and do only a 275 m of hike-up.

3. Poludnik ski tour. The slopes of Poludnig can be skied almost everywhere, the upper 600 m, of course. But the northern part has a more dense vegetation, so you'd need to adapt to snow conditions. Certainly fine is the SE slope and promising could be also the W ridge. You can see a detailed map (1:50.000) on-line on: http://www.austrianmap.at/.

4. Dosso Gais / Geisrücken. This summit is easily reachable from the saddle between it and Poludnik (mountain road reaches there).

5. Zielkofel / Zillen di Mezzodi / Čela, 1824 m, offers free views around and can be reached by its all three ridges. The longest ridge and tour is from the north. In that one, we can first visit the beautiful Garnitzenklamm (canyon), from its middle part (Alte Klause) we can exit towards the SE and ascend Möderndorfer Alm, 1507 m, and from there further towards the S-SW on Zielkofel. Then we can descend by the partially protected SE ridge and further eastwards on Stallensattel, Sella Zille, 1498 m, and then down on Egger Alm. Nice to have the second car there. Across the S slope of Zielkofel an ex military path goes. It is used by Karnischen Hohenweg, which there connects Stallensattel and Stutenbodenalp. From this meadow/saddle Zielkofel can also be ascended. This is the S-SW ascent, possible also if on a ski tour. Only just before the summit there's a short rocky barrier, which requires UIAA I climbing effort.

6. Cima (Col) di Mezzo, 1754 m. It rises above the upper valley of Rio Bianco, NW of Monte Acuto. The summit is not difficult to ascend, but also not too attractive. From Stallensattel / Sella Zille we can hike southwards and then along the NW ridge on top (see below #7). The other option is first towards the SE and then over the NE foresummit (1731 m) on top. There are even enthusiasts3 who were skiing down there.

7. Monte Acuto / Spitzberg / Špik, 1781 m, from the N (Austrian trailheads). It's the main and most attractive summit in its range. Northern ascents are much shorter than the tours, starting in Val Canale or Valle di Ugowizza. The normal ascent from the Austrian side starts on the parking place below Egger Alm, 1360 m, from where we follow the forest road around Plagna / Planja on Kersnitzen Sattel / Sella Chersnizze, 1542 m. From there further on by a cart road on Stallensattel / Sella Zille, 1498 m. Some 1 h till there. From this saddle we continue by the NW ridge on Cima di Mezzo (Col di Mezzo), 1753 m. From there, we continue by the connecting ridge (towards the SE) on Monte Acuto. 2 h 10 min, pathless terrain, difficult orientation. A bit more steep is the direct ascent by the N-NE ridge. This route goes from Egger Alm first on Schlosshüttensattel / Sella del Poludnig, then down into the Valley of Malborghetto, from near the Casa Forestale above the left creek bank and down to the creek at the upper close (ex wooden dam). Then by the steep N-NE ridge directly on top. 2 h 20 min from Egger Alm.

8. Monte Acuto / Spitzberg / Špik, 1781 m, by the S-SE ridge. This is an often described tour, but it is long and goes by an ex military trail which is quite deteriorated. Either by the whole ridge (starting in Santa Caterina in Val Canale, over Monte Cucco; partly pathless route) or from the trailhead in Val Rauna (side valley of Valle di Ugowizza) we must first reach Sella Clinach. From there we continue by the ridge towards the N-NW, crossing first Croda dei Cacciatori, 1645 m, then Cima Gail, 1705 m, and finally by a secured trail and in easy climbing on Monte Acuto. 4 h to 4 h 30 min ascent only! 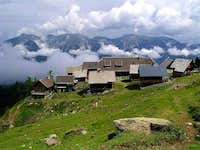 The ascent on Poludnig can be done in one day. On all three pastures (Egger Alm, Dellacher Alm and Poludniger Alm) you might get in summer a private accomodation.

On the Italian side of the massif, there's a complete wilderness.

Poludnig can be climbed any time of the season. For tour skiing, I have no information how is the road to Egger Alm cleaned in winter and spring. It goes over the northern slopes and is quite steep. So, I guess it's cleaned late. The summits of Monte Acuto range requred excellent orientation skills and can be very long, so they should be ascended in summer and autumn. Tour skiing is possible from northern trailheads, but require high expertise (see the guidebook #2 below).