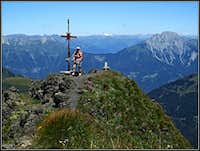 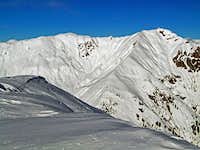 The S slopes from M. Dimon

Going by the main crest of Carnic Alps from the west towards the east, after the rocky Creta di Timau and its lower neighbours, the ridge mountains get more and more humble and grassy. Also, not so unusual for the geologically mixed structure of Carnic Alps, rocks become different too. Still, the summit of Hoher Trieb / Cuestalta has on its top a rocky structure, which makes almost all ascents to it steep and a bit harder than on the mountains further to the east. So, it can be considered one of the more important summits of the group.

Hoher Trieb / Cuestalta is also very popular for ascending. This is due to the fact that just below its summit, on the NE side, a well maintained mountain hut stands, that there are also broad mountain pastures, and that the area is reachable by a mountain road, opened also for public traffic. We need less than 1 hour 30 minutes to the top from there. In addition, many visitors come also from the Italian side, where the other hut stands.

The summit is an excellent panoramic point. Besides being a popular hiking destination the area is in winter also appropriate for tour skiing. A hard ski descent goes also just from below the summit of Hoher Trieb / Cuestalta. And, last but not least, the area is very appropriate for mountain biking. But the ascents from the valley of Gail/Zilja are very long and enduring. To the hut you have some 15 km of the road and more than 1050 m of altitude difference. The area is also known from the World War I. Still today you can see a few caverns and rests of trenches, and visit the memorial places around the mountain, such as the chapel on Zollner Alm. The Italian army was holding the main crest, the Austro-Hungarians were holding only the summit of Kleiner Trieb / Punta Medate.

From the Ancient Times

Interesting may be also the fact that the nearby Passo Pramosio / Kronhof Toerl was frequented already in prehistoric times. A bronze exe, found there, is a certain proof of that (can be seen in the Archeologic museum of Zuglio). Only when the Ancient Roman road over Passo di Monte Croce Carnico / Ploecken Pass was built, Passo Pramosio trade route lost its importance. Also high alpine pastures were populated in prehistoric times. On the upper Chiàula pasture, 1539 m, two fibulas and a bronze needle were found.

Towards the north, the main Carnic Alps crest falls with at first partially rocky, then grassy and bushy slopes on the territory of Austrian high Carnic alpine meadows, such as Zollner Alm. As on the other regions of this mountain group, also here long valleys with vivid creeks run down towards the main Gail/Zilja valley. Between them are long, rounded, on top grassy mountain crests, and on their slopes alpine pastures. So, towards the north from Hoher Trieb / Cuestalta also one such crest runs. Beyond the broad saddle it culminates on the grassy, panoramic Zollner Hoehe, 1930 m, and then lowers down with forrested slopes more steeply.

As the neighbouring mountains, also Hoher Trieb / Cuestalta is built of old, paleozoic rocks. Lower-Middel Devonian limestones are a bit specific, on the southern side of the main crest and on the north on lower regions (where the meadows lie), broader areas are made of slate and sandstone.

The shallow (2,80 m) and only 1 ha large Zollner See (lake, E-SE of the hut) is a nice place to visit and also a very interesting geological area. The sea bed is made of up to 440 million years old black Silurian (paleozoic) slates, mixed with sandstones. The lake is a relict from the last ice age, formed of slowly melting dead ice. The lake shore flora is also precious and very specific. While in summer water temperature can reach up to 20 degrees, in winter more than 1 meter thick ice is not a rare occasion.

Towards the Cuestalta / Hoher Trieb area, from the north raises a long valley of Noelblingbach. In its lower part it has a gorge, where the creek falls down in up to 40 m high cascades. The highest single waterfall has only 10 m. The waterfall, and so also one of Carnic Alps geopoints, can be reached by a marked trail from Noelbling in 25 minutes.

Kronhofer (also Weidenburger or Assnitzbach) waterfall is situated one valley towards the west. This nice looking, 20 m tall waterfall can be reached from Weidenburg in 30 minutes. En route we can visit also the ruins of Weidenburg castle from the 13th century.

As higher mountains are distant enough, from Hoher Trieb / Cuestalta we can enjoy a very broad panorama. A great portion of Carnic Alps towards the south, east and west, further towards the east Julian Alps, towards the north-west Lienz Dolomites, right behind them Schober Group and further on the northern horizon the other groups of Hohe Tauern, with their ice-covered main summits. Between Hohe Tauern and carnic Alps the range of Gailtail Alps runs, with the nearby very handsome summit of Reisskofel. 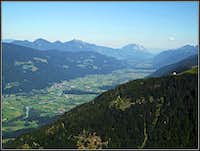 The view on the valley of Gail/Zilja

1. From Zollner Alm, 1720 m. The meadow can be reached by a narrow, but still solid mountain road, starting in Weidenburg, near Dellach in Gail/Zilja valley. It is opened for public traffic from start of June till end of September. This is the north-eastern approach. You can also hike-up to Zollner Alm. In that case the best option is to take the marked path (Weg der Stille, also: Generalmajor-Henneberg-Weg) through the valley of Noelbling Bach, which has a few nice cascades.

2. The second approach from Gail/Zilja valley goes one side valley towards the west (Kronhof Graben) and brings you on Unteres Bischof Alm, 1181 m. I have no information when the road till there opens. From this meadow a narrow mountain road continues over the saddle towards the east, and reaches Zollner Alm. But it is probably not appropriate for usual vehicles. By this valley one option for a ski tour goes.

3. The third (normal) approach comes from the west, from Passo Pramosio / Kronhof Toerl (path No. 448). This saddle can best be reached from the mountain road, which ascends from Timau town to Rif. Casera Pramosio, 1521 m. The second option is through Kronhof Graben (see above) and from the road by the trail towards SW up on the saddle. The third option for coming on Passo Pramosio / Kronhof Toerl is from Koederkopf, 2167 m, by the Karnischer Hoehenweg. Koederkopf itself can be reached in 1 h 30 min from Obere Frondell Alm, 1523 m, by the ex military trail called Kreuzsteig.

4. The second Italian approach comes from the valley of Rio Cercevesa, from the SE. Noth of Paularo we leave the mountain road, which encircles Monte Zermula. From Casera Ramaz we hike towards the NW to Rif. Pietro Fabiani and further on top. 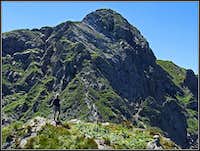 On the ascent on Hoher Trieb / Cuestalta and its ferrata 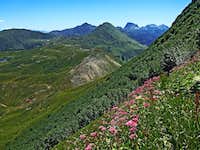 On the ascent on Kleiner Trieb / Punta Medatte

1. Ferrata over Kleiner Trieb / Punta Medatte. From Zollner See (Dr. Steinwender) Huette, 1720 m, we hike a few minutes towards the SW. Soon we leave the main hiking trail, Sentiero dei Silenzi, which goes over Zollner Toerl, Passo Pecòl di Chiàula. A bit further also the route on Hoher Trieb / Cuestalta branches. The inscription tells us, that right goes the medium hard hike-up, and left ascends our trail to ferrata. So, we go left, ascend in several turns up to the main ridge below Kleiner Trieb / Punta Medatte and over a few easy rocks on this nice fore-summit. From its cross we can already see the whole course of ferrata. First we need to descend steeply (steel cables) over the rocks into the notch between both summits, then we follow steel cables up over the summit slabs of Hoher Trieb / Cuestalta. It is quite steep, some places also require a little power in your hands, so the ferrata can be rated as a medium hard one. In the middle we reach the rocky step, where the ferrata crosses right around (a bit exposed too), then it continues straight up and after some 150 meters of the total ascent it ends on top. For less experienced a ferrata set can be useful, in some places the rock is crumbly, so take care there. Difficulty: T4. 1 h 30 min from the hut. 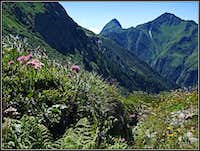 On the west Austrian route 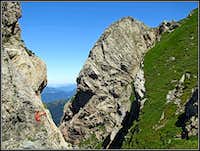 The summit from the west Austrian route

2. The western Austrian route. As described above, go to the crossroads and continue by the right trail. It goes comfortably up and around the Kleiner Trieb / Punta Medatte. On the other side of its short NW ridge we cross the slopes and reach the steep slopes, descending down from Hohe Trieb / Cuestalta west ridge. There the trail winds up in many turns, avoiding a few rocky towers, rising from the slope. The trail is steep and not well beaten, so it requires a lot of attention, especially on a descent and if the grassy slopes are wet. Finally we reach the west ridge and in a few minutes the main summit. Difficulty: T3. 1 h 30 min from the hut.

3. From Passo Pramosio / Kronhof Toerl. We reach the saddle either from the Italian or Austrian side (see the Getting There section). From the saddle, the path No. 448 ascends by the Italian side, until it reaches the main crest below the summit of M. Scarniz. From there follow the main ridge to the top. The path is not difficult (T3), from the saddle 1 h 30 min, from Casera Pramosio 2 h 10 min. Note: From the W ridge it is wort visiting the war remains on the terminal part of the SE ridge. From the Point 2090 m a well visible horizontal path crosses the southern slopes, finally reaching there.

4. From Rif. Pietro Fabiani, 1539 m. From the road we reach the hut by one of many marked paths. The shortest is No. 454 (Sentiero dei Silenzi). 1 h 30 min till here. From the hut the path No. 448 (448a), the main Traversata Carnica, crosses the southern slopes of Hoher Trieb / Cuestalta towards the west. It soon ascends the ridge of Creta Rossa, and continues crossing the slopes on the other side. Only when it comes just south of the summit, the ascent route deters right. It reaches the upper part of Creta Rossa and by it goes on top. 2 hours from the hut.

West of this marked path the grassy S ridge goes just from the Traversata Carnica to the main ridge, allowing a pathless ascent.

In addition to these routes, you can of course from Rif. Fabiani also cross the state border (over Zollnertörl, Passo Pecol di Chiaula) and ascend on Hoher Trieb / Cuestalta from the Austrian side (#1 and #2).

5. NE wall. By a distinct ravine, finishing close to the main summit, M. Tessari climbed in 1923 one easy route (UIAA II. degree), which is however not very attractive. You can see a detailed map (1:50.000) on-line on: http://www.austrianmap.at/. 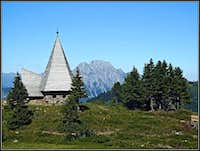 The chapel on Zollner Alm

The best months are in summer and autumn. An ascent in winter conditions can become hard (steep slopes), although in good conditions the summit can also be reached in times of tour skiing (over the west ridge).