The two Schlichtenkarspitzen are part of Northern Karwendel chain and are located between Vogelkarspitze to the east and Bäralplkopf to the west on the German – Austrian border.

To the south both Schlichtenkarspitzen are showing steep and somewhat rocky meadows and dwarf pine thickets.
To the north there is a huge rockface dropping down about 700 meters into Wechselgraben valley and Fermersbach valley.

Most people will summit both Schlichtenkarspitzen during the nice traverse from Vogelkarspitze to Bäralplkopf or vice versa. This is, in my opinion, the best normal route to these summits and, to be true, the only reason worth mentioning these mountains. The traverse is a delightful walk on the ridge crest (or near it on the south side) with spectacular views down the north faces. In spring and summer the meadows are full of wildflowers thus adding to the pleasures.

Until now these two mountains have changed only a little. Both summits are still rather unknown, have no marked trails or summit crosses, a guarantee, that your chances to stay alone on these heights and get this special “Karwendel – von Barth – feeling” are rather good. 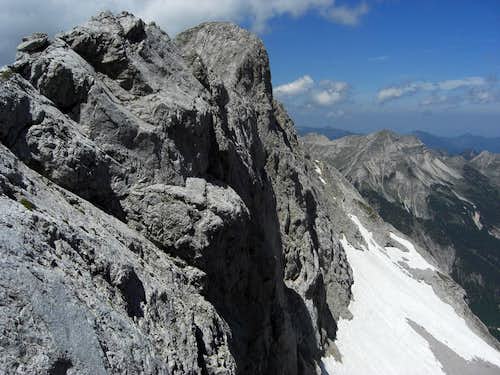 The best trailheads for Schlichtenkarspitzen / normal routes are

You reach Mittenwald or Scharnitz by car:

The Karwendelhaus ascent from Scharnitz uses the long Karwendeltal road up to Hochalmsattel, the col between Birkkarspitze and Östliche Karwendelspitze where the huge mountain hut is located.
MTB is nearly a must (otherwise 13 km walk!). 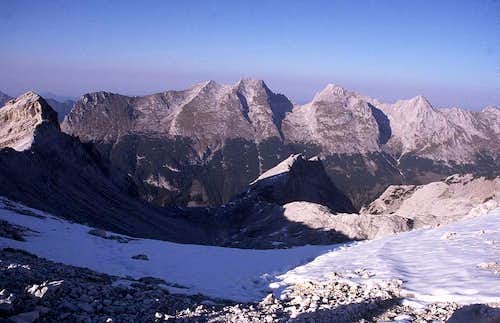 Follow road B 2 until it crosses Isar river north of Mittenwald. Turn left (right when coming from Innsbruck) before the road crosses Isar again, and follow this road until you reach the hiker parking area.

For Hochlandhütte follow the signposts at road B 2 to the Mittenwald barracks. Turn on the road to the barracks and go straight on to the undergrade passing of road B 2. Turn right to park your car on the parking area.
Follow the forest road in southern direction. At the first trail junction take the left hand trail and ascend on that trail, partly using some forest roads further up the slope, to Hochlandhütte.

Scharnitz and Mittenwald can be reached with railway, too.

Traverse the full Vogelkarspitze summit ridge easily from east to west summit (rock scramble, scree). Descend the southwest ridge of Vogelkarspitze first near the ridge crest later by zigzagging down the steep south slope until you regain the ridge at the col between Vogelkarspitze and Hintere Schlichtenkarspitze.

The traverse to Vordere Schlichtenkarspitze is made by following the ridge crest to the west – easy rock scramble, meadows and scree.

This is the descent route of Herrman von Barth on his first ascent to Schlichtenkarspitze. I do not recommend this route – it is better to summit Bäralplkopf or Vogelkarspitze first and do the above mentioned traverse of the whole ridge.

The problem is the dwarf pine thicket at the bottom of the mountain. Coming from Krinner-Kofler-Hütte or from Karwendelhaus: use the Gjaidsteig, the connecting trail between these two mountain huts. Below the south ridge of Hintere Schlichtenkarspitze is a dwarf pine free zone nearly reaching down to Gjaidsteig. The problem is to recognize the right place to leave the trail and to fight oneself up through the dwarf pines to this pine free zone:

Below Vogelkar cirque (coming from Karwendelhaus) Gjaidsteig crosses a broad meadow. It then traverses two scree chutes. 100 to 150 m after the second one look for some gaps in the dwarf pines and try to break through to the dwarf pine free zone. From there ascend first straight up and then more to the left to gain the south ridge to Hintere Schlichtenkarspitze.

I think that these north routes are rather unusual climbs: 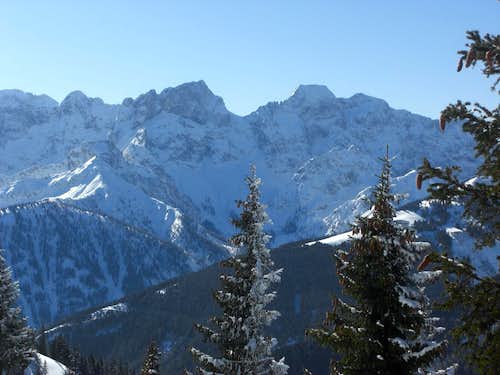 Schlichtenkarspitzen are part of the “Alpenpark Karwendel”, an important and strictly protected national park.

There is no entrance fee for the park but many regulations to follow. Please respect the following rules in the National Park: 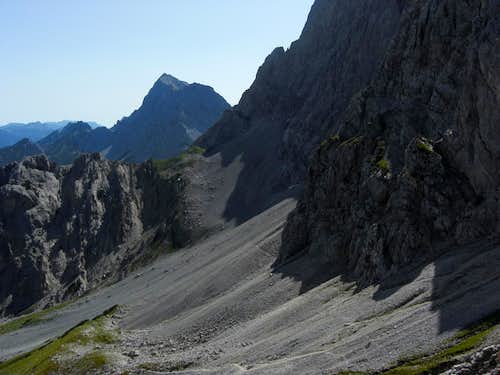 Schlichtenkarspitzen as seen from Wörner ascent

Schlichtenkarspitzen are climbed in late spring, summer and autumn until the first snow falls. Winter ascents are unusual.

The normal / traverse routes are a partly off-trail outing which requires a steady step in steep meadow terrain without any tracks or trails, some route finding qualities and scrambling abilities, especially for the traverse Bäralplkopf - Vogelkarspitze.

You need good hiking gear, good shoes, ski poles are recommended. Take lots of water with you, especially for the traverse. There is no water between Karwendelhaus and Bäralplsattel! 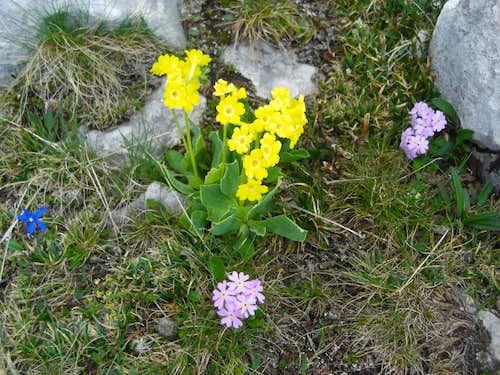 Wildflowers on the south slopes of Schlichtenkarspitzen