Some summits can easily be recognized by their shape. Vogelkarspitze, for instance, can be identified ecen from the city of Munich because of the near level summit ridge, which extends for about 500 m between the east and the west summit. Their altitude difference is only 2 m and a bump in the middle of the ridge with a huge cairn is the highest point of Vogelkarspitze.

Vogelkarspitze belongs to the huge northern Karwendel chain which builds an impressive northern rockwall against the much lower summits and hills of Pre-Karwendel ranges. Vogelkarspitze is, after Östliche Karwendelspitze, which stands directly east of our summit, separated by Vogelkarscharte and Vogelkar cirque, the second highest peak of that subrange of Karwendel. To the west the ridge continues to Hintere Schlichtenkarspitze, a summit with low prominence and separated from Vogelkarspitze by an unnamed col.

To the north Vogelkarspitze shows a huge, about 700 m high rugged and uninviting rockface down to Rontal valley. The north ridge of Vogelkarspitze, also called Steinkarlkamm, runs from the western summit to Westliche and Östliche Steinkarlspitze, two minor summits north of Vogelkarspitze, thus dividing Rontal valley to the east from the upper valleys of Fereinbach creek to the west. I was told that there is an (surely off-trail) route from Rontal to Vogelkarscharte which passes partly through those northern rockfaces of Vogelkarspitze. This must be one of those routes for the hard core Karwendel lover.

The south face is more inviting. It is a steep and rocky meadow slope, adorned above Karwendel valley, the southern border of Northern Karwendel chain, with woods and, as an effectice protection against too much hikers, a dense belt of dwarf pines. On this south side is located the normal route from Karwendelhaus vis the southeast ridge.

The summit register shows not many registrations throughout the years. As both normal routes are not, or nearly not, marked and as there is no trail, Vogelkarspitze is not in the focus of many mountaineers. So the first advantage is: you normally will be alone on top of that mountain.
The second one is the southern exposition of both normal routes: there is less snow than on other Karwendel routes, especially in late spring and early summer.
And a third advantage: both normal routes can be combined to a classic and beautiful traverse (Karwendelhaus - Vogelkarspitze – Hintere and Vordere Schlichtenkarspitze – Bäralplkopf – Bäralpl - Karwendeltal).

This is in my opinion a real dream traverse on a high Karwendel ridge. I did that in june 2014; there were millions of deep blue Gentiana and other wildflowers blossoming all around and we had an undisturbed perfect Karwendel day.

Vogelkarspitze was first summited by Hermann von Barth on 4th of july, 1870.

The best trailhead for Vogelkarspitze normal routes are

You reach Mittenwald or Scharnitz by car:

The Karwendelhaus ascent from Scharnitz uses the long Karwendeltal road up to Hochalmsattel, the col between Birkkarspitze and Östliche Karwendelspitze where the huge mountain hut is located.
MTB is nearly a must (otherwise 13 km walk!).

Follow road B 2 until it crosses Isar river north of Mittenwald. Turn left (right when coming from Innsbruck) before the road crosses Isar again, and follow this road until you reach the hiker parking area.

For Hochlandhütte follow the signposts at road B 2 to the Mittenwald barracks. Turen on the road to the barracks and go straight on to the undergrade passing of road B 2. Turn right to park your car on the parking area.
Follow the forest road in southern direction. At the first trail junction take the left hand trail and ascend on that trail, partly using some forest roads further up the slope, to Hochlandhütte.

Scharnitz and Mittenwald can be reached with railway, too. See the railway schedule here . 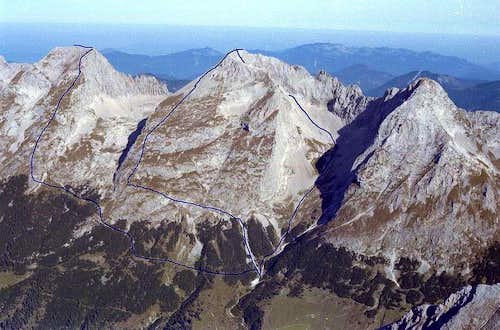 You partly need some route finding qualities for this ascent. It is the most frequented normal route to Vogelkarspitze (most frequented means: one party a week or so …):

Leave Karwendelhaus on the supply road to Hochalmsattel. When the supply road bends to your left (huge switchback) follow the jeep track which goes straight on in northern direction until you reach a trail, traversing Grabenkarspitze south slopes from southeast to northwest.

Alternatively cross the meadows in some ups and downs to that trail, starting from the supply road switchback.

Follow that trail more or less level until you reach the dry rundown chute, coming down from Grabenkar cirque. Go straight on there, traversing the chute; do not take the (better looking) right hand trail, this one leads up to Grabenkar cirque and Östliche Karwendelspitze.

Our trail runs near level further west and northwest and disappear at a first meadow. Traverse this meadow level or slightly ascending; the trail reappears at the western end of that meadow. 100 m further on at a second meadow the trail disappears again. Aim at the upper end of that meadow, don´t descend! There is a gap in the dwarf pine thickets and the trail reappears and winds up its way to a hill bordering the lower parts of huge Vogelkar. Great lookout point.

Don´t follow the foot tracks ahead of you, leading up into Vogelkar; this is the route to Vogelkarscharte. Look for another gap in the dwarf pines west of the hill and follow a narrow foot track shortly descending (!) and traversing the meadows of lower Vogelkar cirque to the lower end of the rocky southeast ridge, coming down from Vogelkarspitze east summit and bordering Vogelkar to the west.

Traverse a short scree fiel (foot tracks) and aim for the ridge where the dwarf pines end. Climb up there to the broad ridge (grade I scramble) and follow the steep meadows of the southeast ridge directly up to Vogelkarspitze east summit. The rock parts can easily be climbed or navigated arount. The uppermost part of the ascent is easy rocks and scree. Views are getting better and better with the ascent. You may see some cairns but no foot tracks.

Vogelkarspitze is part of the “Alpenpark Karwendel”, an important and strictly protected national park.
There is no entrance fee for the park but many regulations to follow. Please respect the following rules in the National Park:

Vogelkarspitze normally is climbed in late spring, summer and autumn until the first snow falls.

It is a partly off-trail outing which requires a steady step in steep meadow terrain without any tracks or trails, some route finding qualities and scrambling abilities, especially for the traverse Bäralplkopf - Vogelkarspitze.

Take lots of water with you, especially for the traverse. There is no water between Karwendelhaus and Bäralplsattel!