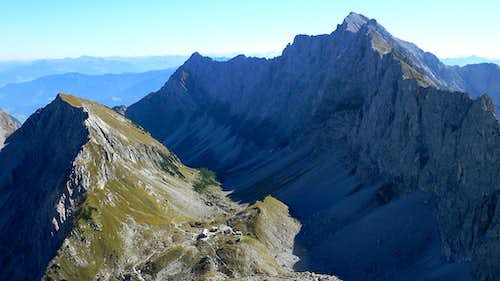 For a rather long time Hochnisslspitze led a rather lonely live in the more or less crowded area of Lamsenspitze and Lamsenjoch hut. Not many people knew about the existence of this huge and broad summit. Maybe this was due to the once nearly invisible path starting at “Lamstunnel”, now called “Brudertunnel” (I don´t know why), a narrow and steep rock window where the Brudertunnel – aka Lamstunnel – Via Ferrata ends.
Maybe this was due to the strenuous ascents from wherever you want to tackle this summit: nearly 2000 m of altitude difference on a south slope coming from Inntal valley and nearly 1700 m of altitude difference when starting from Eng valley or Falzthurn valley.

Nowadays with many Internet mountain pages like this one and with the new yellow signposts shooting up everywhere and naming all existing summits and cols, Hochnisslspitze has lost its charming innocence. The summit register tells the story: in old times a true Karwendel summit register was a slim booklet which lasted for more than 40 years. Those were the long gone days …. Now Hochnisslspitze hosts a real summit book with many, many pages which has to be replaced every three to four years.

Nevertheless Hochnisslspitze still is a long and demanding outing in the easternmost Karwendel ranges.
Branching off from Lamsenspitze to the north a long and sharp ridge with a huge and near perpendicular eastern rock wall runs in southeastern direction and culminates after 2,5 km at Hochnisslspitze summit. It then bends to the east and lowers itself step by step down to Inntal valley. This long eastern rockface is impressive and seems not climbable for the “normal” mountaineer. 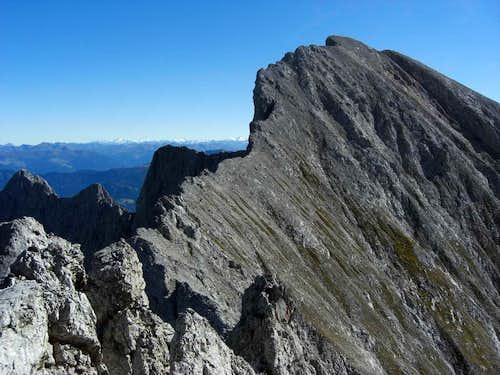 But geology works for the mountaineer! Not only through mountain building. By causing week zones based on thrust faults, geology created two clearance gaps within this massive rock face: Lamsscharte directly below the impressive south and southeast face of Lamsenspitze and the ascent to Lamstunnel (Brudertunnel), one of the first Via Ferratas within Karwendel ranges, recently completely overhauled and refreshed.

These two gaps give way to Hochnisslspitze summit coming from northern direction. Nevertheless with two secondary summits on this ridge, Rotwandlspitze and Steinkarlspitze, there are two more obstacles with additional ups and downs (not unusually causing nervous break downs of mountaineers who are not familiar with this ascent route and think, they did it – no folks, this is only Steinkarlspitze summit) before standing on top of Hochnisslspitze.

I always did Hochnisslspitze as a long day tour. To shorten the efforts you may stay one night at Lamsenjochhütte, too. This has the advantage to peak-bag Lamsenjochspitze, too on your first or second day. Or you spend an extra day on Hochnisslspitze during a longer Karwendel traverse.

Whatever you choose to do, Hochnisslspitze still is worth a visit.

There are four main trailheads for Hochnisslspitze:


You reach Eng valley by car

You can reach Eng valley from Munich by rail and bus, too. Check this possibility here.. 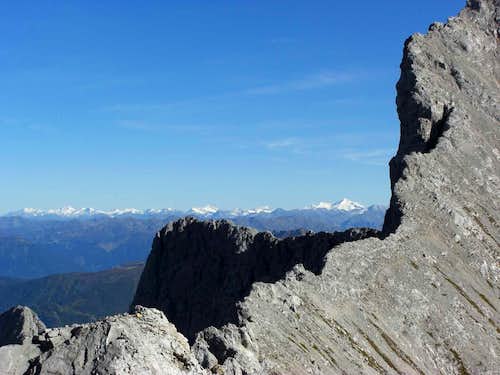 Beautiful view to Großglockner and Großvenediger

The next railway station is at Jenbach / Inntal valley.

From Jenach take the Achensee Railway to Pertisau. The timetables can be checked here.

Alternatively take the bus number 4080 bus from Jenbach to Pertisau.

Pertisau – Gramai Alm is about 1 hour by foot (or some Euros with a taxi). 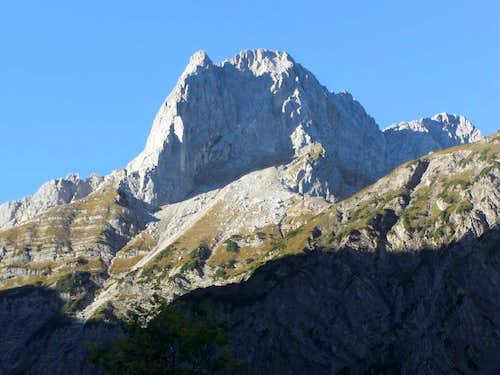 You reach Schwaz or Vomp

The ascent to Hochnisslspitze from the end of the Brudertunnel via ferrata via Steinkarlspitze is closed!! Actually Steinkarlspitze undergoes heavy changes, the summit is a rock slide area with freshly opened rock crevasses. Don´t use this route!!!


From Eng valley to Lamsenjoch hut

At Alpengasthof Eng cross the bridge at the beginning of the road to Engalmen. Turn left on a trail running first parallel to the creek and then through woods up to the forest road to Binsalm Niederleger.


From Binsalm Niederleger follow the old Alm road or the trail up to Westliches Lamsenjoch. Traverse the east slopes of Lamsenspitze below the impressive east face and ascend shortly to Lamsenjochhütte.

Start at Gramai Alm parking area, follow the forest road in southwestern later in southern direction, ignoring all trails branching off to the left or right. Go straight on where the trail to Gramai Hochleger branches off to your right. The trail starts ascending the north and northwest slopes of Rauher Knöll and Schafjöchl and zigzags up until it reaches the trail coming from Eng Almen at the traverse after Westliches Lamsenjoch. Turn left on that trail and follow it shortly up to Lamsenjochhütte

No one day tour to Hochnisslspitze!

Start at one of the hiker parking areas, follow the forest road up to the Stallenalm meadows. At the beginning of these meadows take the left hand road at a forest road junction (the right one goes up to Stallenalm) and continue on that road until you reach Lamsenjochhütte.

Take a trail in western direction starting at the mountain hut. Follow the right hand trail at a trail junction some 100 meters after leaving the hut. Ascend the east slopes below the east face of Lamsenspitze until you nearly reach the bottom of this impressive rock face. Turn left on the trail, traverse to the southwest, first on scree, then entering easy rock slabs (partly secured with steel ropes). Ascend then steeply over easy rocks (secured) up to Lamsscharte.
At Lamsscharte take the descending trail alongside the ridge crest to the upper end of Brudermühltunnel where the Via ferrata ends. About 120 m of descent.

Go on descending on that trail until you reach the trail junction with the Vomper Loch route. Go straight on and traverse some easy rocks, still descending into a shallow chute. Cross that chute and start ascending the other side and follow the trail back to the ridge crest of the ridge between Lamsenjochspitze and Hochnisslspitze. The trail now climbs Rotwandlspitze summit (2322 m), the first secondary summit of Hochnisslspitze.

At the south side of Rotwandlspitze a steep rock chute leads down back to the ridge. Descend the chute by scrambling it down carefully (many loose rocks, some steel ropes; about 80 m descent) and ascend the ridge in the direction of Steinkarlspitze, the second secondary summit of Hochnisslspitze. After traversing a rocky peak sitting on the ridge you traverse Steinkarlspitze summit on its eastern (left) side until you reach a sharp rock notch. Steinkarlspitze can be climbed from this notch in less than 5 minutes (UIAA grade I).

Descend steeply passing through a gap between two rocks and arriving at the upper end of a series of steel ropes. Descend first following steep cracks down to a level ledge. Follow this ledge to your right until it ends at a steep chute. Climb down carefully this chute; the last steps are exposed and perpendicular (about 120 m descent). Traverse then back to the ridge crest which requires some rock scrambling and ascend the trail to the first steep slabs of Hochnisslspitze northwest ridge. Follow the marks and cairns up to the summit, using small ledges and short chutes with nice scrambling. 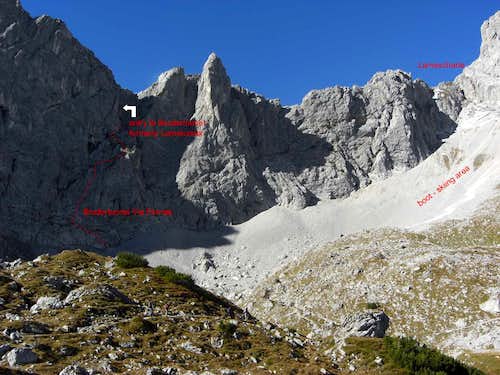 The Via ferrata starts there. Ascend to your left, following a ledge. At the end of the ledge the ropes are leading straight up steep rocks very exposed to a small rock platform. From there easier terrain leads you up to the steep chute coming down from the rock window, called Brudertunnel (formerly Lamstunnel).

Climb up a steep ledge and traverse exposed into the chute at the lower entrance to Brudertunnel. Enter the cave-like rock window and ascend steeply to a perpendicular rock face. At the upper end of that rock face is the exit of Brudertunnel. Hoist yourself up that rock face (about 10 meters) with the help of steel ropes to reach the west side of the ridge between Lamsenjochspitze and Hochnisslspitze.

Turn left on the trail coming down from Lamsscharte and continue as described above. From the parking area follow the forest road to the west, it ends at Stubbach creek. Cross the creek, leave the little valley on its west side until you reach a trail junction. Take the right hand trail and ascend on this trail steeply to Niedernissl and Hochnisslspitze.
About 1.700 m of altitude difference on a southern slope without water!

From the parking area follow the forest road to the west, it ends at Stubbach creek. Cross the creek, leave the little valley on its west side until you reach a trail junction. Take the left hand trail, it is called Ferdinand-Kogler-Steig. The trail enters the huge valley of Zwerchloch between Huderbankspitze to the west and Hochnisslspitze to the east; don´t cross Zwerchbach creek but follow a trail on its east side up Zwerchloch valley to another trail junction. Take the right hand trail which ascends steeply up to Lamskar and reaches the north route to Hochnisslspitze 2 minutes below the upper end of Brudertunnel.

Turn right on the north route to Hochnisslspitze as described above.

Hochnisslspitze is part of the Alpenpark Karwendel, an important National Park of Tirol / Austria.

Hochnisslspitze is mainly a summer and autumn summit.

Normally the routes are open by end of june. Drift snow can block the Brudertunnel exit completely early in the year. I once had to wind me through a narrow snow hole in june.

The north ridge and the Brudertunnel Via ferrata require helmet and self belay.

Remember that all routes are long and have about 1.700 meters of altitude difference. Don´t underestimate that mountain. In summer I do not recommend the southern routes as ascent routes. There is not much water and the south slopes of Karwendel are hot and barren. 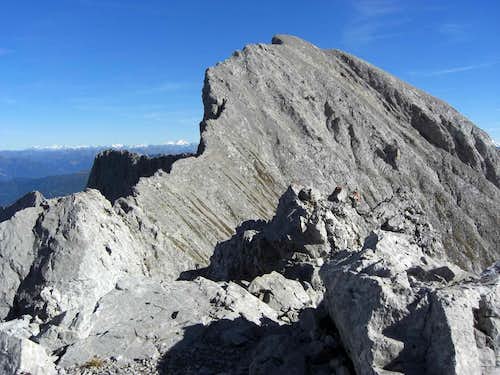