Independence Monument is a free standing tower of soft, red sandstone, the signature formation of the Colorado National Monument. It soars 450 feet above the floor of the monument canyon. Colorado National Monument is a relatively small area of eroded red rock formations and canyons just south of the Colorado River, near Grand Junction. Independence Monument may be the most frequently publicized summit in state of Colorado, following the Maroon Bells and Pikes Peak. It appears frequently on calendars and picture books of Colorado, and was featured on the front page of the Denver Post on July 5, 2006.

Independence Monument offers several challenging technical routes with difficulty 5.8 to 5.11, and is a favorite of rock climbers regionally. I have attempted but not completed the Monument climb via Otto's route. Climbers may post their favorite routes here.

There are various explanations of how this tower earned its name. John Otto, the earliest climber of Independence Monument, placed a United States flag on its summit on July 4, 1911. In recent years, Grand Junction area climbers have picked up Otto's tradition, and plant Old Glory on top of the Monument each Independence Day. In 2006, this tradition took on a new twist. The Mesa County technical rescue team led 30 nonclimbers up the Monument. Each nonclimber donated $100 to the rescue team. 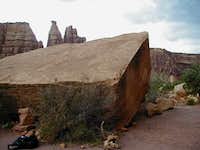 Independence Rock, near the Monument

In another show of patriotism, Otto and his wife carved some of the words of the Declaration of Independence on a flat boulder not far from the base of the monument.

Otto was a colorful, one-man political action committee, who provoked the citizens of Mesa County to petition Congress to declare the area west of Grand Junction a National Park. In addition to his lobbying campaign, Otto worked tirelessly and single handedly built miles of trails in the monument. Eventually, the Grand Junction newspaper and Chamber of Commerce got behind his project, and Colorado National Monument became a reality by an act of Congress on May 24, 1911. Otto stayed on as the caretaker of the monument at a salary of one dollar a month into the 1920s.

Otto left his mark on Independence Monument itself, in the form of deep artificial holds. In his day just climbing the rock in any manner was a visionary and stupendous feat. But the result today is a tower with possibly no natural, free route to the summit. As rpc noted (2/15/05 photo comments)...
"Otto did this back in early 1900's. There was no concept of climbing ethics pretty much (little or no concept of rock climbing) and little or no concept of nature preservation. He was also one of the driving forces responsible for formation of the Colorado Nat. Monument. I don't think we should judge this guy too harshly given the circumstances. Had he done this today, that's a different story..."

From I-70 take highway 340 south out of Fruita. Drive south 4 to 5 miles, to a subtly marked driveway next to a large, brown house sitting on the west side of the road. This is at the crest of a rise, known to locals as "Question Mark Hill" due to the shape of the road there. The driveway leads about 200 yards off the road to a small parking lot. This is the trailhead at the east entrance of Colorado National Monument. Follow the trail past some houses and then 2 miles west to the base of the monument.

No permits are required to climb Independence Monument. Note that Colorado National Monument does not allow any biking or motorized vehicles off the main road.

As the Monument is located in a high desert area, the best time to climb is in the spring and fall. Summers are hot and dry, 80 to 100 degrees F. Winters are mild, 20 to 45 degrees F. Significant snowfall and prolonged rains are uncommon. After sandstone gets wet it loses much of its strength so it's a good idea to stay off of it for a couple of days after a good rain.

Use good judgement and Check the Weather Forecast for that area.

Colorado National Monument has an 80-site campground open year-round. Call 970-858-3617. Motels are readily available in the nearby cities of Grand Junction and Fruita.

On June 29, 2003, a 23-year old Grand Junction man fell climbing solo on Independence Monument. Park rangers reported that his accident was the first in the last 20-25 years. He survived a 40 to 50 foot fall.

If you have other information about Independence Monument that doesn't pertain to any of the other sections, please add it here.