This page was transferred to me by Alan Ellis.  Thank you Alan for a wonderful contribution. I will try to keep it up to date as best as I can. 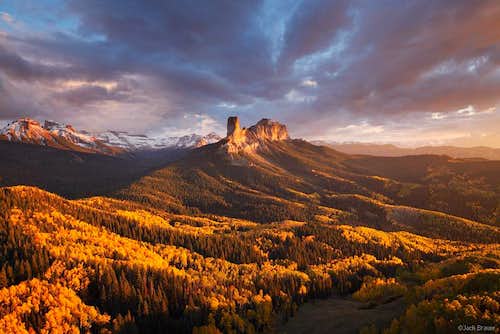 In the northwest San Juans resides a lonely tower. Chimney Rock (also sometimes called Chimney Peak) sits among great peaks and formations such as Courthouse Mountain, Precipice Peak, and the spires of Cimarron Ridge. While driving up through the Cimarron Valley, Chimney Rock greets and entices the climber, yet warns of its possibilities.

At 11,781 feet, this bastion of stone captures everyone’s immediate attention, including those of movie producers. In True Grit, Chimney Rock served as a backdrop during Rooster Cogburn’s (Wayne) unforgettable horse-riding, double-rifled-slinging match with reins in his teeth against three outlaws. No doubt the imagination of the ambitious technical climber is captured as well, yet very few take on the challenge. The towering Chimney Rock spire was first climbed in 1934 by Melvin Griffiths and Robert Ormes. (This paragraph courtesy of Aaron Johnson)

The standard and only established route is rated 5.6 and follows the South Face Crack. Do not be fooled by the very moderate rating. Chimney Rock has dangers that make this peak a solid grade III climb. These dangers include extreme rockfall, poor rock quality, and long unprotectable pitches (run-outs). And....all of these factors exist at the same time on almost every pitch. In addition, the approach includes a steep bushwhack through interminable downfall and loose, unprotectable class 4 and 5 which much be negotiated just to reach the base of the tower. Chimney Rock is climbable, but take heart and take care. It is not for the timid or the inexperienced. But for the ones who are looking for a true adventure climbing challenge, then Chimney Rock offers a great opportunity to test your mettle. Good luck in your endeavor. 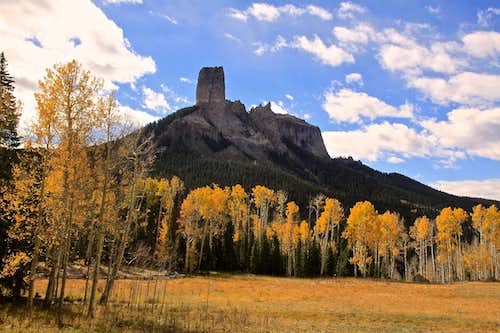 Chimney Rock and Lizard Head have commonly been held to be the most difficult peaks on Colorado to climb. There are differing opinions, however, as to which is the more difficult (I believe Lizard Head is more difficult). Chimney Rock was first climbed on September 15, 1934 by Melvin Griffiths and Robert Ormes. The report on the first ascent in the February 1935 Trail and Timberline concluded that Chimney Rock was a "much more difficult climb than Lizard Head" but is a safer climb because it is "composed of well cemented conglomerate". The initial report probably exaggerated the difficulty of Chimney Rock. Ormes, who also made an early ascent of Lizard Head, feels that Chimney Rock rock "couldn't be said, even in those days, to be difficult". Ormes and Griffith climbed the pinnacle "via a chimney and crack which splits the south face of the rock". 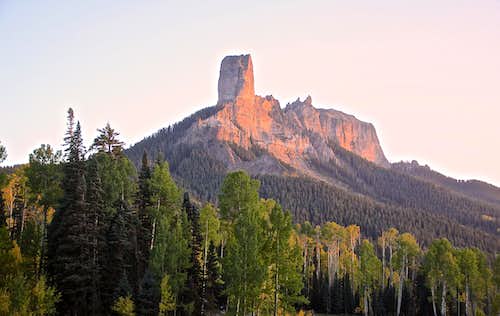 Chimney Rock as seen from the dirt road towards Owl Creek Pass. 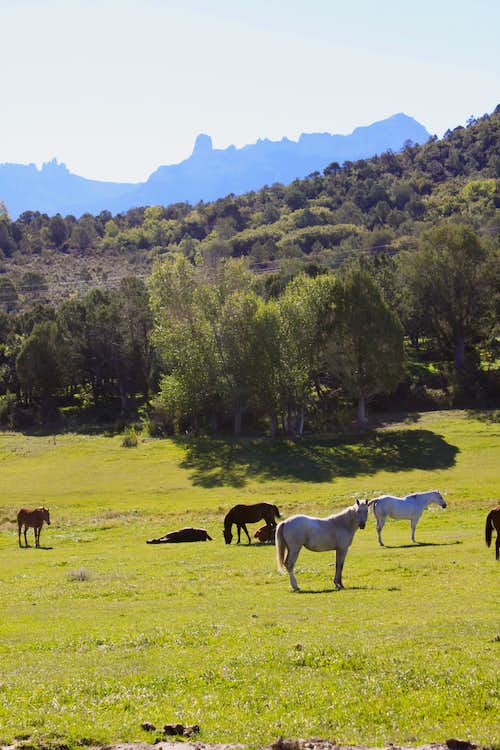 as seen from the road
Chimney Rock is located in the Cimarron group - most of these weirdly shaped peaks attract your attention from the US Hwy 550.
From the near Ridgway on US-550 you can see nicely both Courthouse Mountain and Chimney Rock (see photos above).
If approaching from the west, leave US-550 12 miles south of Colona, 2 miles north of Ridgway, and drive 16 miles east on a good dirt road (no 4WD necessary here); go over Owl Creek Pass (you reach Owl Creek Pass at 16 miles) and a little way south to meet the Cimarron West Fork Road (well signed, about 1/2 mile). Turn onto this road and head down into the beautiful valley of West Fork. You will get amazing views of Dunsiname Mountain and Precipice Peak. Turn onto a dirt road to the north (your right), it goes for less than 1/4 mile. This will be your parking spot for Chimney Rock. You can set up your camp right there.
If coming from the east, leave US-50 18.5 miles west of Sapinero, 2.5 miles southeast of Cimarron, and drive south 21 miles to Silver Jack Reservoir and the Jackson Ranger Station. Continue, keeping right twice, circling west to the West Fork of the Cimarron, and go south up that fork. The road is a good dirt road and well signed for Owl Creek Pass, just remember you have to turn off this road about 1/2 mile below the summit of Owl Creek Pass heading west (it is again well signed for the West Fork).

From Rosenbrough's guide book: "The February 1935 issue of Trail and Timberline reported that the first ascent was made "via a chimney and crack which splints the south face of the rock". The first ascent part reached the foot of the crack after scrambling over a troublesome band of rock by means of shoulder stands. The vertical crack is some 400 feet in length and contains several interesting chockstones."
Route Description: SP link here                    Album of climbing on Chimney Rock here
Expect a lot of scrambling the get to the base of the climb (and bushwhacking).

There are a lot of primitive camping opportunities along the West Fork of Cimarron Creek and also right at the parking lot for Chimney Rock. Camping sites here are free, and are very popular with locals. Expect a lot of hunters in the fall.

Here is a link to developed campground if you wish to be further away and pay some fees :)