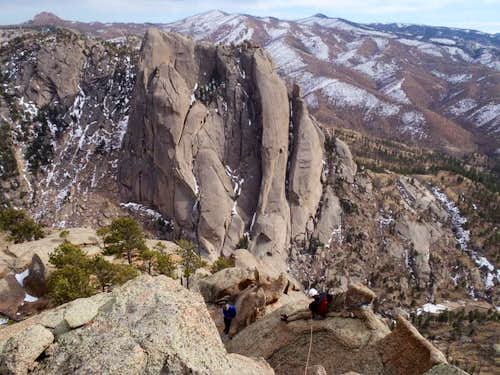 With views like this, who needs an excuse to climb?
"Big Rock Candy Mountain" from "Tick Dome"

From out of the ashes of the Hayman Burn, where the South Platte cuts a deep scar across the land, rises a playground of granite spires, domes and outcrops begging to be climbed. One of these sublime mounds of cracked and weathered granite is nicknamed “Tick Dome,” presumably due to its resemblance to an upturned tick.

Located in far southeastern Jefferson County, near the four-corner intersection of Jefferson, Douglas, Teller and Park Counties, the summit of “Tick Dome” does not readily reveal its secrets to the unprepared. Be ready for a 5th class climb on lichen-covered rock to gain the summit, itself a jumble of off-camber blocks and thick flakes.

The views from the top of “Tick Dome” across the vastness of the burn area are rewarding, including the back side of the ridge containing Pilot Peak to the west, Cedar Mountain and Hackett Mountain in the distance to the east and numerous surrounding domes such as “The Turret,” Sheep Rock and Sheeps Nose. But most striking of all is the awesome, full-frontal view of “Big Rock Candy Mountain” directly across the Platte River canyon.

Colorado Rank: “Tick Dome” is a soft ranked peak, which basically means there is no confirmed 300-ft variance between its summit and the lowest point of the saddle with its next highest neighbor.
Prominence: 280 feet
USGS Quad: Cheesman Lake
Rank & Prominence: Lists of John 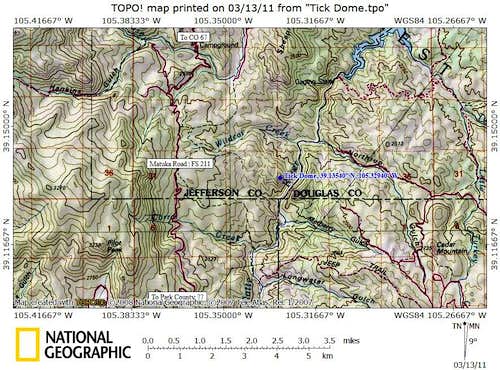 “Tick Dome” is accessible from the west via FS 211, also known as Matukat Road. This road can be accessed from CO 67 from the north or from Park County 77 from the south. High clearance is recommended in dry conditions and 4x4 would be a must in snowy or wet conditions.

From Denver, take Hwy 285 south to Pine Junction, Hwy 126. Head south down to Cheesman Trail (22 miles, approximately 40 minutes). From there, take a very sharp right hand turn (270 degrees!) as it turns to a dirt FS road. Follow this road (FS 211) west and south another 15 miles (30 minutes minimum). This is also named "Goose Creek Road" and alternately, "Matukat Road". Park at the broad shoulder at the designated parking area, almost due west of "Tick Dome." Thanks Jeremy. 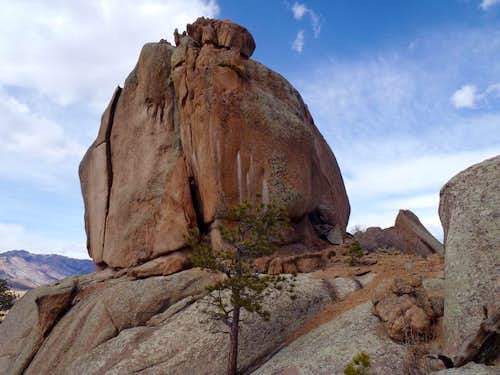 "Tick Dome" from the southeast

Give the land time to heal from the fire and please observe parking / driving restrictions and other use restrictions as posted by the US Forest Service. There is no fee to use this area. Please observe private property boundaries, such as those of the nearby Lost Valley Ranch, as well as Denver Water District closures. 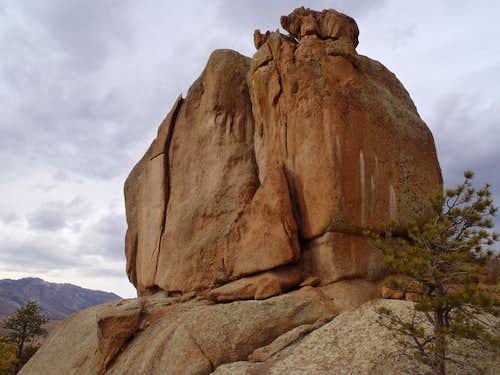 "Tick Dome" from the east-southeast

As the land recovers from the ravages of the Hayman Burn, parking in this area is limited to designated parking areas only, greatly constricting rustic camping. The Forest Service operates the seasonal Goose Creek Campground which is just a few miles drive from the western approach to “Tick Dome.” 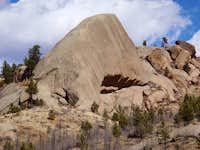 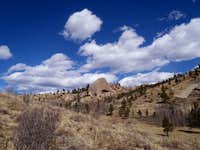 Spring or fall would be ideal times to visit “Tick Dome.” The relatively low-elevation, western approach could be dismally hot in the summer. Heavy winter or spring snows would make FS 211 impassible. 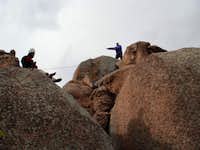 Father and son dancin' the day away 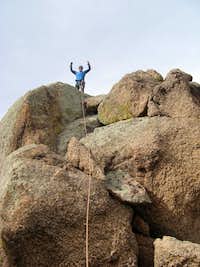 Sarah on the summit

Thanks to fellow SPer Jeremy for this additional information for beta on "Tick Dome" and other area climbing:

wale whale wail It's all good! Thanks for the catch, my good copy writer. I still have you on retainer, correct? No need to invoice me this time around! Sarah