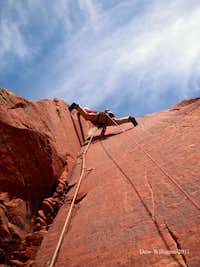 In my opinion, Kolob Canyons, which encompass the three forks of Taylor Creek, is one of the most beautiful climbing locations in all of Utah, much less Zion National Park. Kolob is the lesser known climbing destination within the confines of Zion. As remote as it might seem at times once you are off the park road and en-route, this section of the park does have its own visitor center and entrance, just off of I-15 allowing easy access. Wind, Sand and Stars, IV, 5.12, put in by Jeff Lowe in 1991 and freed by him in 1992, put the steep Navajo sandstone walls of Kolob Canyon on the climbing map. Charlie Fowler, Steve Johnson and Ron Olevsky later added Sunlight Buttress, IV, 5.11b, to the same wall and because it was Charlie’s favorite climb ever, it made Mark Kroese’s “Fifty Favorite Climbs: The Ultimate North American Tick List” in 2001. Conrad Anker established my favorite sport routes thus far (2009) in the canyons, Namaste (5.12a) and Huecos Rancheros (5.12c) in the early 90’s as well.

There are three forks of Taylor Creek (north, middle and south) that create Kolob Canyons and run from snow melt chocked up in slot canyons to the east as you enter the park from the west. The south fork runs between Paria Point and Beatty Point and this is where the majority of the established climbing routes can be found in Kolob. Some of the climbing routes start at 6000’ or higher and thus make for good summer objectives in comparison to the St. George area. Although the south fork of Taylor Creek appears to be currently unaffected by raptor nest closings, we witnessed and heard quite a few raptors in the area.

There are two Kolob sections in Zion National Park; Kolob Canyons located near Cedar City and the Kolob Terrace Road near Virgin. It is easy to get confused on these two areas as their access is quite far apart from each other. For the Cedar City option and where most of the established climbing is located, take exit 40 off of I-15. They require you to pull into the ranger station to show your park pass. Then drive up the red road for approximately 3.2 miles to a parking lot on the right. Cross the road and find the trail that heads up the south fork of Taylor Creek which is straight off the bend in the road. Sunlight Buttress and Wind, Sand and Stars are on the left at the mouth of the canyon. Rooster’s Pinnacle is on the right side. Huecos Rancheros, Namaste along with many other sport routes are about a mile or so up canyon via a very pleasant trail.

Tucupit Occidentalis, 5.10+, 7 Pitches/ Occidentalis offers sustained 5.10 crack climbing traversing from pitches 1-2 to the left system for pitches 3-4 and then slightly right to yet another stellar (5th) pitch.  These five pitches cover over 600’ of sustained and relatively clean crack climbing at the grade.  The 6th pitch is the only “junk” pitch on the climb as well as the only pitch requiring any fixed pro (pitch 2 has two pitons but accepts gear placements if they were to go missing).  The 6th pitch traverses left through two bolts to reach another corner.  The 7th pitch, although softer rock, surprises you with a “Headache” (ultra-popular route in the main Zion canyon) type splitter to finish off the day.  The FAer’s borrowed the first two pitches from an existing route, with the remaining five pitches established in 2015.  Like most routes in Zion, the FAer’s assigned it an alpine grade of IV, but a competent party can climb this route in a short day.  The approach is approximately one hour and the route raps back to the base.  The first two pitches climb well as a single full 200’ pitch and compete with the 4th pitch for the best, most sustained, lead of the day.  There is a lot of diversity on this route, off-width, chimney, fingers, overhanging hands, layback, face traverse…..the list goes on. The setting is remote and you more than likely won’t see or hear other humans with the exception of a few hikers if climbing on a weekend. Dow

Sunlight Buttress- IV- 5.11b/ There are many points of fixed pro, both new and old, on Sunlight Buttress. The rap/belay stations in January 2011 were in great shape. You can reduce this original nine pitch climb to six pitches total with a 70m lead rope. Keep in mind if you do such, most all the pitches will be a full 200’ in length, and quite sustained, with at least one pitch even longer. Take plenty of micro pro, you will place it. The first two pitches do not see the sunlight in January until about 10:00am. They are by far the cleanest pitches of the route and are good to combine together whether using a 60m or 70m rope. Start out in the left of twin cracks and move to the right one at the tree. Then follow up a neat bolted (3) arête and pass the first belay. When you reach the chossy chimney/corner above, move out left onto a bolted face and follow a seam back right to a semi hanging belay. The third pitch is the second most difficult pitch of the route. Stemming up the blank thin corner placing micro pro is the crux (5.11) of this pitch. This third pitch continues at a fairly sustained clip to another semi-hanging belay. The fourth and fifth pitches are best to combine to reach a comfortable belay ledge, but you need a 70m lead line to combine them without simul climbing. The fourth pitch is a 5.10+ sandy bolted slab. The fifth pitch has a few interesting moves including a small off-width/chimney section but is much easier than the fourth pitch. The sixth pitch is the crux of the route (5.11). Off the belay ledge is an ankle buster move at the grade, but the move can be stick clipped (via Charlie's suggestion on his topo). Then the route trends right via hard moves on soft rock before angling back left to the hanging belay. If you combine these pitches, you make for another comfortable belay ledge. The last two pitches ease up in angle and grade. Rap the route. Dow

Rest of South Wall up Canyon

Namaste- 5.12a/ A fantastic route in a fantastical place. This Conrad Anker route goes down as one of my all time favorite sport routes anywhere in North America. A long sustained 150’er that requires double ropes for the rappel. It starts out way overhung and really never cuts much slack on the gravity situation until the last 20’ or so. The first bolt is off the ground a bit and until you reach the ladder like sandstone rungs, the beginning is the crux of the route. When you rap, you practically end up 40’-50’ away from the wall, which defines how overhung the route is. However, the holds are almost all huge jugs making the actual moves themselves no harder than 5.10. There is a finger hold or two, but the real crux is getting the route clean without pumping out, if you are human. Sun never hit the wall in June. Tons of birds and vegetation, offering kind of an alpine flare this deep in the canyon with lingering snow in June. 14 bolts to a three bolt fixed anchor. Dow

Half Route- 5.10+/ As the name implies, this route is half the length as Huecos Rancheros and Namaste. Same character though, just not as overhung for as long. Huge jugs the whole way. One small rest before the last bolt as you can slide into a huge body sized hueco. Otherwise a pump fest for the grade to be sure. Keep it moving is what worked for me. Single rope will make the rappel, no worries. Dow

Double ropes are essential for many of the routes at Kolob Canyon. Some of the sport routes are quite long, 150’+, so plenty of draws if going after them. A topo for Sunlight Buttress can be found in Mark Kroese’s “Fifty Favorite Climbs: The Ultimate North American Tick List” book.