An obscure peak south of SR 9 in the eastern section of Zion National Park, Jenny Peak is a slickrock paradise in a highly scenic, seldom-seen, and seldom-visited area.  Because only one peak east of the Zion-Mt. Carmel tunnel and not considered part of the Zion Canyon group-- Checkerboard Mesa-- has a name on USGS maps, and because there are only two officially maintained trails originating out there-- Tunnel Overlook and East Rim-- the east side is Zion's flyover country, so to speak; the majority of visitors are people on their way to or from Zion Canyon, and they do little more but stop and wander a few yards from the roadside to take some pictures.  Thus, the east side, with its many unnamed peaks and its numerous washes and canyons, is a haven for scramblers and explorers who delight in isolation and secret wonders.  In addition to all the peaks, there are several small slot canyons of varying difficulty levels, including Keyhole Canyon, a dark, very narrow technical slot.
One significant reason for this peak's obscure status is the fact that the name is not an official one although the name is locally accepted by Zion aficionados, with this story attached:

In the early 90's, an Indiana University student named Jenny who was considering quitting school came out with her professor and some other students to hike/climb this peak.  Despite being frightened at times because of a fear of heights, she made it to the summit and was so moved by the whole experience that it changed her life.  Now she is happy and successful.
Source 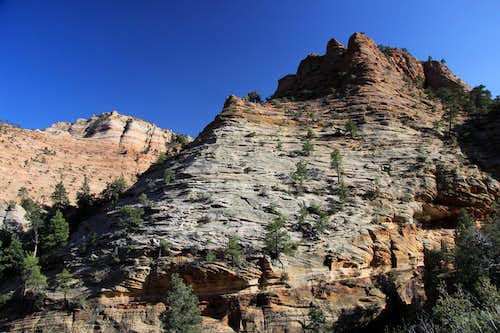 NW Ridge of Jenny Peak
Update, 10/29/2013-- I have recently heard from the namesake of this peak, who came across this page and has shared the following with me through PM:
"My name is Jenny and 20 years ago I hiked this summit, Jenny Peak. I hiked this mountain with a fella named Steve R. and other archeology students. My fear of heights diminished as Steve and I talked the entire hike. We talked of issues of the present time. My mindset from the base to the top of the climb was like a walk of a Labyrinth. My whole mindset changed. This experience was a life-changing moment. When we hit the top, Steve said 'We are naming this Jenny Peak.' Today I was presented with information from Rob Tolley, Senior Archeology professor at Indiana University East, as the messenger that the experience which occurred 20 years ago carries on today. I had no clue. Zion National Park is going to recognize Jenny Peak as the official name for this Summit..What an unexpected surprise and what an honor..there will be more to come I am sure. I was just presented with this information today. 20 years later and I had no clue...
...I would like to say that the climb was an experience that I hold dear. Rams was wonderful. What an eye-opening experience. Rams has many stories running around in his head; I am sure it is easy to get stories mixed up. The climb was in May. Beautiful season to hike. I am not on fond of heights but thanks to Ram he guided me through the challenge. That time of my life was very confusing. This was my first year at Indiana University East. My parents split and I wasn't sure if I could stay in school; the finances were coming from my pocket. Also I was at Ball State prior for 2 years and I was going to have to repeat some classes.. My life with my fiance at the time was not healthy. Our differences were extreme in some areas of our lives....Yes I was at my wit's end prior to the hike and when I reached the top of the summit, my life held a new trail to venture."
Steve/Rams, by the way, is Steve Ramras, known locally as a true explorer and aficionado of Zion peaks and routes.  I had learned of his name through a guidebook no longer published.
Back to the obscurity of the peak...
Another reason for the peak's obscurity is, unfortunately, the fact that it is currently illegal to climb it.

Once you ascend the steepest part of the north ridge and reach level ground, you will not be able to miss, unless you already know they are there and intentionally look away so you can claim at least semi-plausible deniability, signs noting that further progress by any human means is prohibited in order to protect sensitive resources.
Now, it would have been nice had the Park Service placed such signs much closer to the road instead of after the crux of the route.
That said, this page does not condone or encourage disregarding the area closure and continuing on to the summit.  Should you decide to continue, you do so knowing that you are at risk of being fined or even arrested (the former is far more likely if you are caught).
Thus, the firsthand route information on this page will stop at the area closure.  Even if I did go on to the summit, I will not incriminate myself by providing exact details or photographs.  Instead, I offer my guarantee that the beta I will share about the rest of the route is from a source that is to be completely trusted.  So in case you are willing to assume the risk or unless the area's status changes, this information will be here.
Back to the peak...
Jenny Peak offers a fun, aesthetically pleasing route that is Class 3-4 and exposed in places, though I have read of a Class 2+ route from Gifford Canyon.  Just south of the summit are two small crags known as Jenny's Nipples; one is Class 2 and the other Class 3.  Interestingly, though, Jenny Peak resembles a woman's breast far more than either of Jenny's Nipples does when seen from afar; the summit area looks like a nicely shaped breast, with the summit block looking like a perfectly placed nipple. 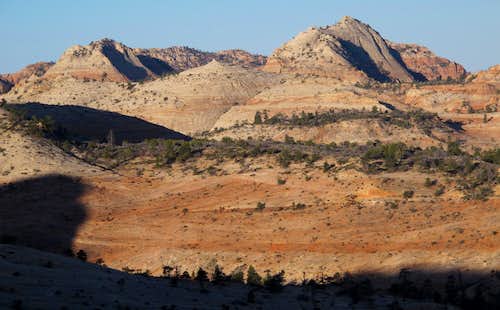 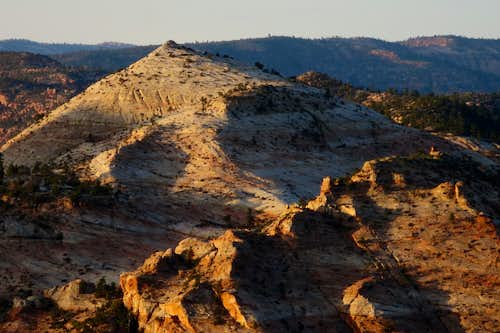 From the Zion-Mt. Carmel Tunnel, drive 0.4 mi east to the point where North Fork Pine Creek comes in from the north and tunnels under the road to meet Clear Creek. Park as close as you can to this spot.

Below is about how things will look from where you park. 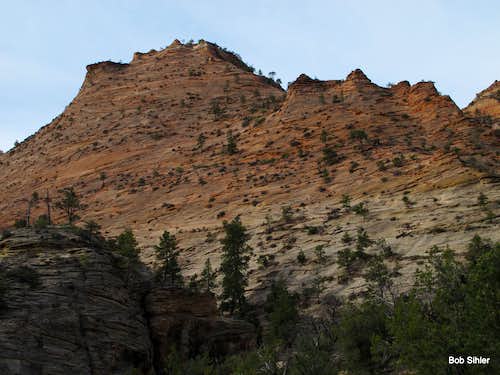 Drop into the wash and head to the base of the north ridge, and then head up the ever-steepening ridge. Usually, it is easiest to stick to the crest or to its left side.

Eventually, it steepens into Class 4-5 terrain. Find your way up. It's not too hard to find a reasonable way; what's hard is gauging your tolerance for exposure and/or rotten rock. 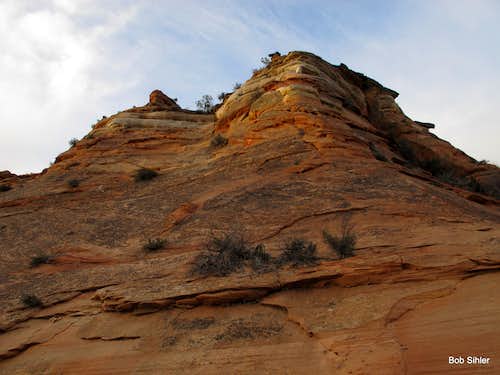 Just a few yards past topping out upon the section shown above (Point 5787), you find the aforementioned closure signs and have to make your choice.

If you choose to go on, the way is pretty obvious and the difficulties are only Class 2-3. 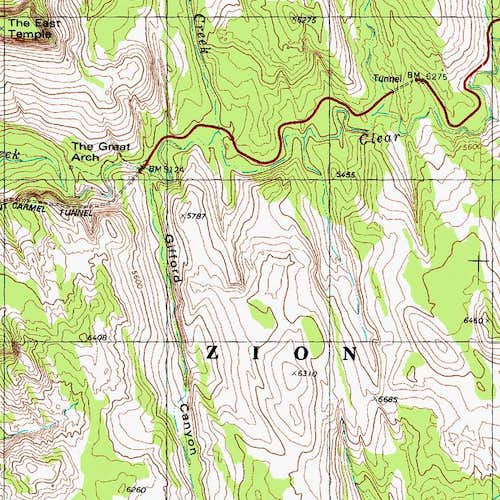 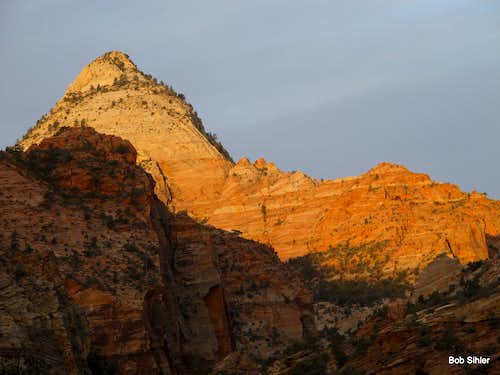 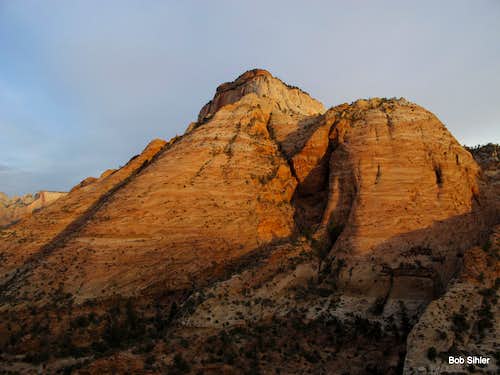 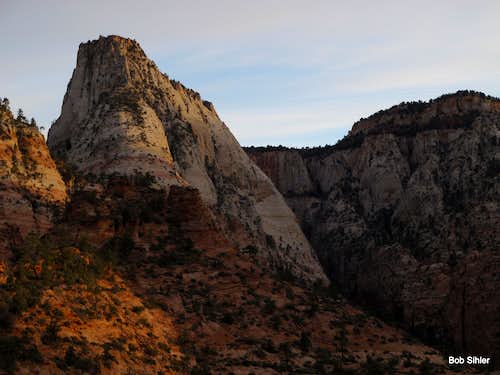