About two tenths of a mile past the East Entrance of Zion National Park is the signed pullout for the view of Checkerboard Mesa, a formation that park brochures and postcards make quite a big deal of. Although photographers will probably prefer the views just down the road at the base of the formation, the viewpoint does provide a nice vantage from which to view this interesting formation and understand how it got its name. Horizontal and vertical cracks along the walls of this butte create a checkerboard-like pattern.

Ckeckerboard Mesa is a sandstone butte typical of many of the formations visible from the road on the eastern side of Zion—it is actually a hardened ancient sand dune, and climbers familiar with the sandstone of southern Utah will be quick to tell you that there is more sand than stone in the sandstone here; it crumbles or pulls away easily, and it is all too common that what appears to be a good hold turns out to be a handful of sand.

Like most of Zion's formations, Checkerboard Mesa offers technical routes, but it can also be climbed via at least one scrambling/bushwhacking route (more details below). The summit itself is guarded by a cliff band that almost entirely encircles the summit plateau; this cliff band is over 100 feet high in many places. The top is mostly level and dominated by trees and a few open areas, and it is not as spectacular as one would hope. To appreciate the fine views that are available, one actually has to descend to the edge of the cliff band that guards the summit plateau, and from those locations the high country of Zion and the high plateaus of southern Utah are on display in all their glory.

Because of the tree-topped summit and the messy, though short, approach, suspect this peak doesn't see a great deal of visitors beyond the many who walk about its base and take pictures or scramble a short way of the slickrock slopes. Atop the summit plateau, there were very few signs of previous human presence. At the summit itself, I found no cairn or register.

Please read: Although the summit plateau is mostly sand and brush, there are some areas where you will see a dark, crusty-looking soil. This is called the cryptobiotic crust, and it is alive! It is the ecological base (along with water, of course) for much of the plant and animal life in southern Utah. Do not step on it; it can decades to recover! 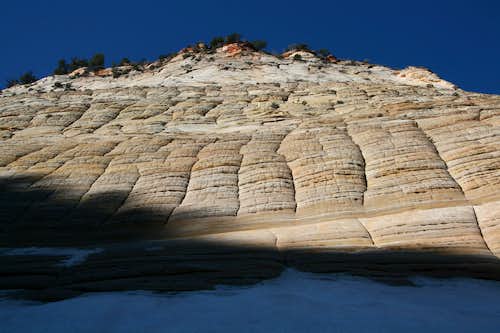 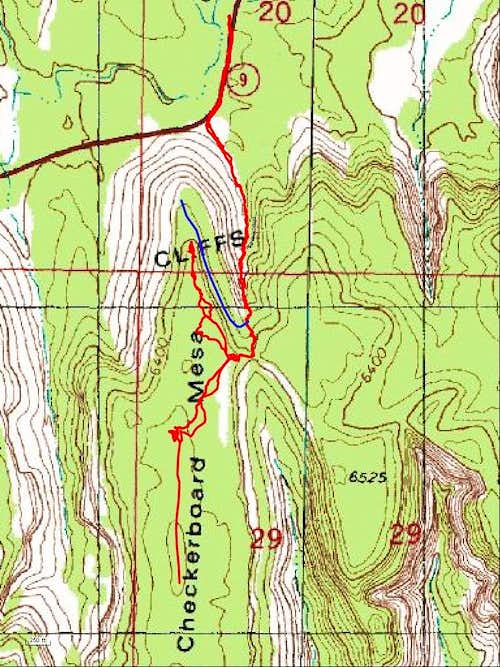 By MoapaPk
1. The route I took was short but not simple. A study of a topographic map will show that there is a short, steep drainage on the east side of the peak that climbs to a 6400' saddle. From there, it is an easy scramble west to the summit plateau, and the summit itself is about half a mile to the south, reached by an easy walk. The round-trip distance from the base of the butte to the summit and back is approximately 2 miles and involves about 1000' of elevation gain.

Follow the sandy drainage until it steepens dramatically as it enters forest cover. There, you have two options: to climb the drainage or to bushwhack up te steep slopes. When I did this route in late March, I found the drainage filled with deep, hard snow and sometimes ice. Under such conditions, an ice axe and crampons are highly advisable. I did not have any, so in the places where it was icy or the snow was too steep, I bushwhacked instead.

When snow-free, the drainage will have at the very least some steep Class 3 sections and very likely some spots that are harder than that. The bushwhacking led me into a few Class 3 spots but was mostly a steep hike. Unless you are equipped for winter conditions, it is probably best to do this route in late April or May when the snow should be gone and the summer undergrowth hasn't appeared yet to further choke the route.

It might be a good idea to mark the spot where you reach the summit plateau. On the way down, I had a difficult time relocating the correct route back to the saddle. The saddle itself is easy enough to find from above; the problem is that almost every attempt to reach it will end up at a sheer drop. If you do mark your exit spot, though, please dismantle the marker before you head back down.

2. This route is only a suggestion; I have not tried it or even scouted it out beyond what I could see from the road. There is also a drainage on the west side of the peak, and it climbs for about a mile to a saddle at 6000'; this saddle is beneath the cliffs that encircle the summit plateau. From the saddle, it is then a 400' climb east to the summit plateau. It is very likely that this final part will be technical. Being on the west side of the peak, the snow on this route will likely melt out earlier than that on the route described above.

3. Technical climbs on the face itself-- I found only this, and it is from rockclimbing.com: "The vertical and continuous crack system in the center of the face is Wheat Chex, 5.6 R. A really nice route in spite of the softish rock" (submitted by chirp). Source

4. If you're less interested in the summit proper and more interested in the excellent views from the north side of the peak, you might consider this outing. There is a hiking and scrambling route that departs from near the east-side saddle and heads back north along the cliffs to reach the top of the first, longer set of cliffs (the cliffs everyone photographs from below). View this map and trail description, both found on a site run by SP members BoBeck and Tanya for more and better information. 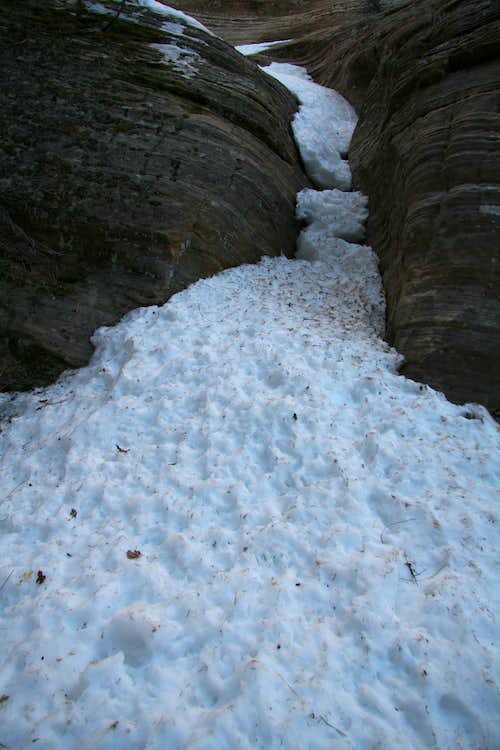 It costs $25 for a weeklong pass to enter the park. Annual and interagency passes (the latter are good for a year for admission to all federal recreation areas) cost more but are a bargain for those who visit this park or others several times a year.

If you are in an RV, are pulling a trailer, or have a double-wheel truck, you must pay an extra fee of $15 to pass through the Zion-Mt. Carmel Tunnel, which is too narrow to allow oversize vehicles to stay in their lanes. Therefore, drivers of such vehicles must arrange for one-way passage while vehicles on the other side wait. The tunnel is closed to these vehicles before 8 A.M.; the latest time in the evening they may pass through varies by season, and drivers should check the park’s website for more information. 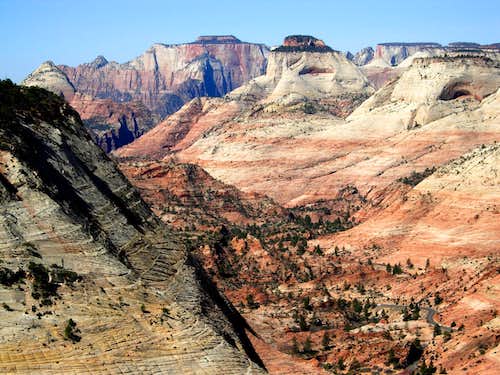 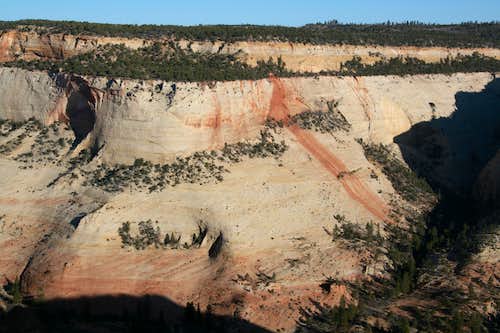 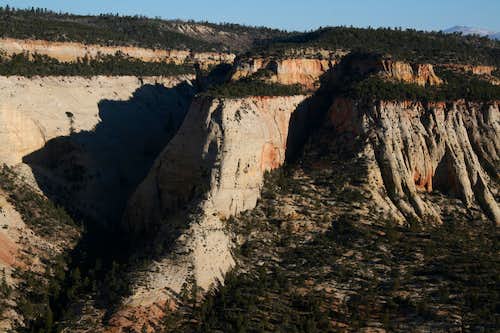 Bob, Great page on this famous Zion landmark. There is a discrepancy between the elevation you list as 6,550 feet and the topo map which shows 80-foot contours. John Kirk's website lists the interpolated elevation as 6,680 feet - see: http://www.listsofjohn.com/PeakStats/Climbers.php?Id=21743

Re: elevation of Checkerboard

Thanks, Tracy. I think my elevation is based on my GPS reading, and you know those can be off a bit. I probably never bothered checking the map carefully or mistakenly read the contours as 40-foot intervals (that's more likely what I did) and therefore thought the reading was pretty accurate since an interpolated measure would be 6540. Anyway, it's corrected now, and Checkerboard Mesa just got 130' higher!