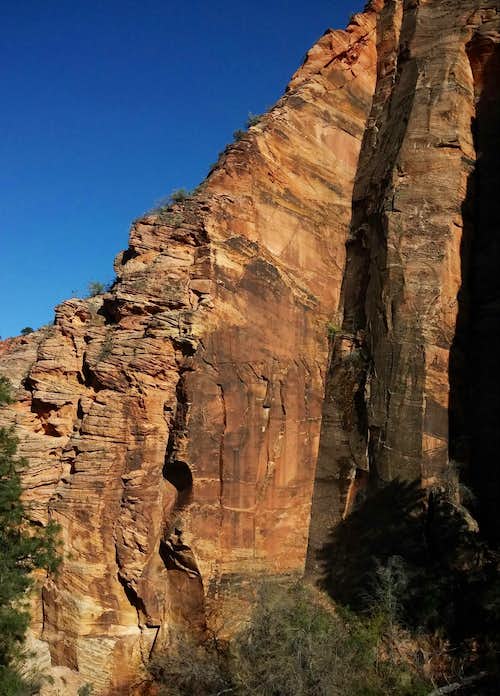 Northern Side of Red Jenny
A northern subpeak of Jenny Peak, Red Jenny is right off SR 9 on the eastern side of Zion National Park. Its abundance of red sandstone and its relation to its parent peak give it its name, which is not on maps but is known to Zion's "peak geeks" (hey, I consider myself one).
Because only one peak east of the Zion-Mt. Carmel tunnel and not considered part of the Zion Canyon group-- Checkerboard Mesa-- has a name on USGS maps, and because there are only two officially maintained trails originating out there-- Tunnel Overlook and East Rim-- the east side is Zion's flyover country, so to speak; the majority of visitors are people on their way to or from Zion Canyon, and they do little more but stop and wander a few yards from the roadside to take some pictures.  Thus, the east side, with its many unnamed peaks and its numerous washes and canyons, is a haven for scramblers and explorers who delight in isolation and secret wonders.  In addition to all the peaks, there are several small slot canyons of varying difficulty levels, including Keyhole Canyon, a dark, very narrow technical slot.
Aside from the great views, there are some other pretty awesome things about this cool little peak:
Warning: Just about a week before the submission date of this page, a highly reliable source told me he had recently learned from park staff that Red Jenny is closed to human usage. Unlike the case with Jenny Peak, where there is a sign along the way (conveniently, just past the crux) clearly stating there is a closure, there are no signs (at least none I saw in April 2015) on the ridges or on the slopes or in the nearby washes informing anyone of this. As author of this page, I do not endorse proceeding into closed areas one knows are closed. The choice is yours, as are the consequences.

0.8 mi east of the Zion-Mt. Carmel Tunnel is a turnout (room for one car, maybe two if the drivers are cooperating) on the south side next to a large rock outcrop. Park here. See the picture below for reference.
If there is already a car there and there is not enough room for yours, park at the closest available turnout and walk back; that spot provides the easiest way in the vicinity down into the wash below.
This is where to start for the NE ridge and the eastern slopes. You can reach the NW ridge from here as well, but there is a better turnout with good access further west.
Update December 2021: The Park Service has blocked off this pullout, and the nearest parking areas are not close. The best way to start the approach may now be to have someone drop you off at the closed pullout. 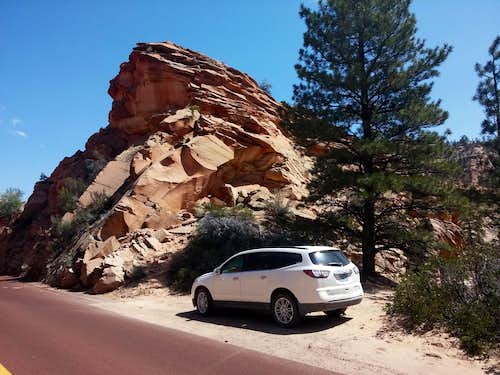 From the turnout, follow a use trail into the wash below.
If you are going to defy the closures and do a Jenny-"North Jenny"-Red Jenny loop, there are some lines between "North Jenny" and the Red Jenny-"North Jenny" saddle that appear to work, but I have not tried them.
There are no bolts or rap stations, so if you want to rap down, you need the gear for that and need to know you will be leaving things behind, which really isn't good since this peak is so pristine. Use a 60m rope for the NE ridge and two of them for the NW.
RT Distance: 1-2 mi, depending on the route.
Elevation gain: about 700', plus about 100' on the return.

$35 entrance fee for Zion these days. You can save $ in the long run by buying an annual pass or interagency pass if either suits your needs.