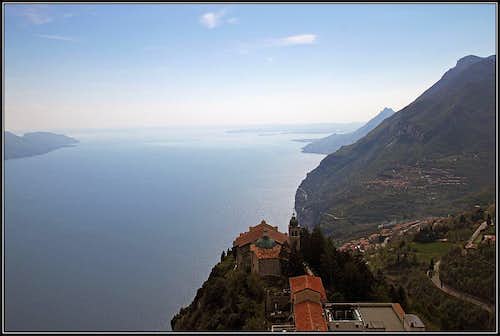 The sanctuary
The western shore of Lago di Garda is characterised by not really high mountains, which however fall very steeply into the lake. In the middle part of the lake an interesting small ridge hill rises. Even if from hinterland it rises only good 200 meters, it has on the other side, towards the lake an almost 700 m high, almost vertical wall. To have the scenery even more picturesque, on the sharp ridge also a sanctuary is situated, making thus one of the most famous scenes of that area. From the sanctuary a comfortable path continues along the ridge. It was made so broad during the World War I, when Italian army estimated that this particulary mountain is very important for military purposes. Still nowadays you can see many caverns along the path.

The round tour over Monte Castello is really a short one. It will take you only an hour and half. But on it you will visit some of the most stunning places around Lago di Garda, characterised primarilly with scary views over the cliffs down to the lake. The tour does not make you the whole day, but it can be with ease added to any tour in the vicinity, like for example on Cima Comer.

We leave our car on the parking place below the sanctuary. There we come by the road from Gargnano. A few km NE of the town the road deters left uphills. It is very panoramic, leading us by Piovere, then through Oldesio, Gardola and finally below our hill. The road approach from the other side is more winding, because the road must go far around to overcome Torrente (creek) San Michele. From Lago di Garda we start driving uphills either in Pieve or already in Limone sul Garda. The whole road trip can be recommended anyway as a nice panoramic drive (or can be done by bike - the road is asphalted and good).

Northern part of Lago di Garda
Despite a low altitude the views are great. We are just above the lake and can nicely overlook the whole southern part of it. The scene with Madonna di Monte Castello is one of the most famous far around. Magnificent is also the view on Monte Baldo on the other side of the lake. The mighty crest rises almost 2200 m above Lago di Garda. When on the crossing we are descending towards the NE, we have also very interesting views on the upper part of the lake and on the rugged mountains west of it.

The Round Tour Over Monte Castello 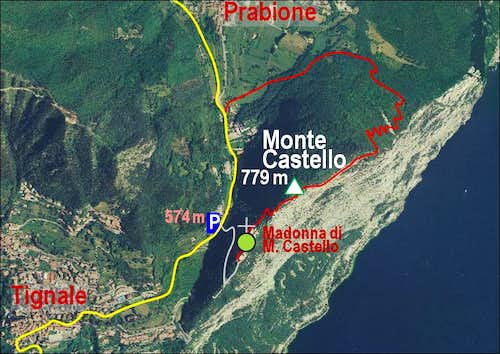 Cliffs above the lake

On the ridge
General. Despite vertical abysses and a very sharp ridge, the path is easy and comfortable, only we should avoid getting irresponsibly on the very edge. The descent over the NE slopes in one degree harder, but still easy enough. The path crosses steep forrested slopes where some usual care on a safe step is needed. Orientation is all the time easy (good inscriptions).

Description. From the parking place we go to the sanctuary by the road or by comfortable shortcuts. Till there we have only 120 m, so 20 min. From before the church we continue by the western side. Soon we are on the ridge again, asking ourselves how will the path manage to go over the precipituous cliffs. But in the beginning it goes into the left slopes, makes a comfortable turn and again we are on the ridge - on the first of the famous panoramic points. The view on the church and the lake is exceptional. Further on the path goes by the ridge or on some places across the slopes left of it. Above there is another nice lookout point and then the path goes above the abysses, passing the summit which we reach from the NE direction.

The continuation of the tour is similar. By a panoramic, forrested edge a comfortable path goes. In this part it goes mostly by the eastern side, just above the abysses. Left in the rocks there are many caverns from the big war. Finally the path reaches a very panoramic pier where also views towards the north open.

From the pier we continue into a broader, but still quite steep NE slope of the mountain. The path is on some places narrow and descends in several switchbacks. We often ask ourselves how far down we shall descend unnecessarilly. One or two paths do deter left, but they are not marked. Finally we cross also a scree field, the path dose some more turns down, and finally starts crossing the slopes far to the left. When it reaches the bottom of the slope there is a crossroads. The right path goes into Prabione, but we turn left up by a cart road. Yes, we must gain some 50 m of altitude. When we do that ascent the path exits right on the asphalted road, by which we march to the parking place.

We can go on Monte Castello any time of a year.