Monte Guglielmo or Gölem is an imposing mountain belonging to the Prealpi Bresciane, Massif Monte Guglielmo. The mountain straddles the ridge dividing the mid Val Trompia from the basin of Lago d'Iseo and it's the highest summit amongst the peaks located around this lake. The mountain has two summits, Dosso Pedalta 1957 m, the highest one, and a little further to the South Cima Castel Bertino 1948 m. Leaning towards different directions and valley, Monte Guglielmo is a particularly complex summit and can be reached from many different starting points. It's very popular and frequently climbed from its different sides. 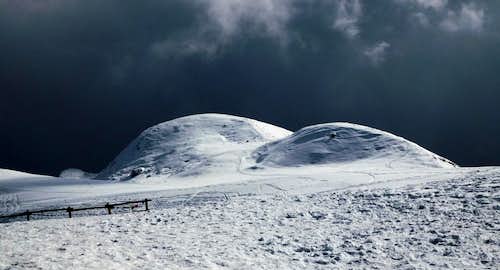 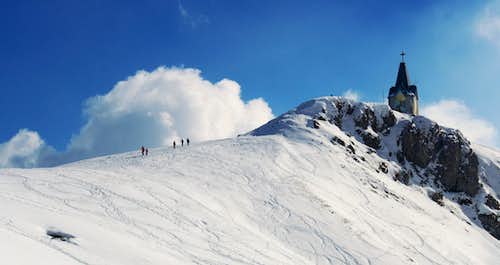 The Southern side looks bare and arid, the Western slopes are cloaked by forests of fir trees up to the tree line, while the North-Eastern side, called "ratù" - meaning "strenuous climb" in the local dialect - is the steepest. Often snow-covered until very late spring, the large outline of Monte Guglielmo is well visible from the Po valley, towering over the surrounding mountains whose summits reach far lower altitudes. The views are breathtaking, extending over Lago d'Iseo, Pizzo della Presolana, Alpi Orobie, Prealpi Bresciane, the Adamello group and during the clearest days even over Monte Rosa and Cervino.

The views are breathtaking, extending over Lago d'Iseo, Pizzo della Presolana, Alpi Orobie, Prealpi Bresciane, the Adamello Group and even Monte Rosa and Cervino during the clearest days. This mountain has two names: the original name is Gölem, in the local language, deriving from the Latin "culmen" (summit), later improperly translated in "Guglielmo".

There are different routes - starting from various localities - to summit Monte Guglielmo, anyhow the nearest town to approach the mountain from anywhere you choose to climb up is Brescia.In the next chapter it will be described the route starting from Rifugio Passabocche, so it's reported the access to this starting point.

From Brescia reach the town of Pisogne in the northern part of Lago d'Iseo following the road along the lake. Before entering Pisogne, just exiting from the road tunnel, take on the right the road entering Val Palot towards Grignaghe and Fraine. The road rises with several hairpins to the road-fork named Dossello 482 m. Here leave the main road and take on the right the branch to Passabocche. After 13 km. from the fork, the road reach Passabocche 1297 m. (refuge and restaurant). Leave the car in a parking lot after the small village.

A satisfactory interesting itinerary, particularly in wintertime. The route allows you to reach at first Guglielmo highest summit - Dosso Pedalta - through an aesthetic ridge, very varied and scenic, then in second order also the top of Castel Bertino.

Route report - Above the parking lot located a bit after the village of Passabocche, take the wide path n. 201 rising within the fir and beech wood. After a stretch in the wood the path reach a clearing, then enters the wood again and after some majestic beechs turns to the left just before the beautiful clearing where it's located the Refuge Medelet 1566 m., where it opens a fabulous view over the surrounding mountains, the Lago d'Iseo and the steep North side of Monte Guglielmo, overlooking the nice place. At the shelter the large path ends, but to the right it starts a narrow trail heading towards the North-East slopes of the mountain. The trail passes immediately near a small monument and begins to climb the steep Northern slopes of the mountain with several turns and crossing. The route climb up the steep northern slopes reaching the Santella della Madonna della Caravina. After passing the chapel, you will soon reach Punta Caravina m. 1847, a Northern shoulder of Dosso Pedalta, where it appears a breathtaking view over Lago d'Iseo and the NW ridge heading towards the summit of Dosso Pedalta.

Here it converges the following route starting from Passo croce di Zone (chapter 5). On Punta Caravina it's located a pole with several signposts and a second metal pole for sighting and recognizing the surrounding peaks. Now we leave the itinerary n. 201 to take the airy but easy and broad NW ridge of the mountain, very charming during the winter season and edged by snow cornices. Through some up an downs the route overcomes various summits (cairns), including the highest top of the mountain, Dosso Pedalta at 1957 m. of height. This route provides breathtaking views all around, over Alpi Orobie, Prealpi Bresciane and Bergamasche, the beautiful Pizzo della Presolana, the Lago di Iseo and the magnificent Adamello range. After getting the summit, the route follows the ridge again, now slightly downhill, reaching a small saddle not much identified, where it meets the blue-white marks of the Path 3V "Silvano Cinelli", that through the last hills of the summit plateau leads us to climb briefly the summit slopes of Castel Bertino, the lowest top, where there is a towering monument to the Redeemer, which can serve as emergency shelter in case of bad weather.

On the summit it's also located a statue of Pope Paul VI and an orientation table. From Castel Bertino we briefly descend to the Rifugio Almici m 1865, where without go down to the basin below we take the path n. 201, traversing the Southern slopes heading to Punta Caravina, passing near a chapel with a little bell. After the chapel we get again Punta Caravina, where we reverse the itinerary to return to Refuge Medelet and to the starting point of the itinerary.

South-East side to Castel Bertino from Rif. CAI Valtrompia

This route starts from the shelter "CAI Valtrompia" 1259 m, 45 minutes by walking from the village of Pezzoro

Route report - From Pezzoro 911 m. follow a narrow concrete road, then becoming unpaved, rising with several hairpins to the Rifugio CAI Valtrompia. From the shelter walk up to a small saddle from which it starts on the left a narrow road getting to Malga Pontogna 1384 m. From here take a path rising along the Stalletti Monte Guglielmo crest, then head to right to reach Castel Bertino. From here towards NW to reach Dosso Pedalta, the highest summit.

The upper part of this itinerary starting from Passo Croce di Zone is common with the route from Passabocche (from Punta Caravina onward).

Route description - From Passo Croce di Zone walk on the narrow road getting Malga Aguina 1146 m., then climb up the large rib getting M. Agolo 1377, where you find the "13 piante" (13 trees), a characteristic group of beechs. Up the next ridge to Punta Caravina, then follow the NW ridge to Dosso Pedalta, the highest summit, as described for the route rising from Passabocche (chapter 4).

This route starts from Rif. Croce di Marone 1164 m. and it's the most attendend and easy itinerary to get the summit.

Route report - From Croce di Marone 1164 take Northward a narrow road getting Cascina Malpensata. To the right of the building take a path reaching Malga Guglielmo di Sotto 1571 m, then Malga Guglielmo di Sopra 1774 and Rifugio Almici 1865 m. From the shelter you can climb both Castel Bertino and Dosso Pedalta.

All year round. Winter ascents may require axe and crampons depending on the ground condition.

Several possibilities to stay overnight in the area.