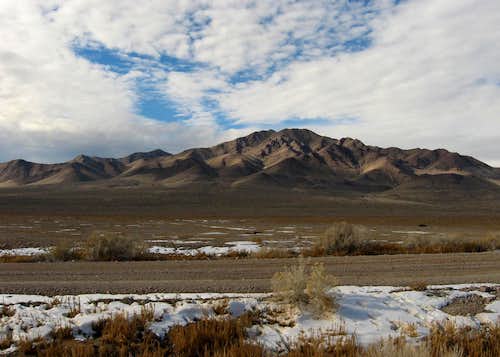 The Drum Mountains reportedly got named because of the sound of "drums" coming from the mountains. Yes, drums, but not the kind that are played in a band. Early settlers and visitors mentioned that from time to time they could hear a very strange sound emanating from the part of the range that was near the old mining settlement of Joy (named after a guy named Joy) and that it was a drum sound. To quote from an article:
" Legend has it that the name of the range comes from a low, rumbling sound, like drums, that comes from deep within the ground around the ghost town of Joy." More on this can be found at this link (along with some pics). At least the area wasn't named after some guy named Drum. Hmmm, nearby you have the "Keg" mountain range. Drum? Keg? Could there be a connection? See the interesting addition on why the "drumming" is more than just legend, included by SP member Scott Patterson in another section following this one.

Jeep road to the left
My interest in this range is due to the fact that the highpoint of the Drum range is one of the Utah Prominence peaks having a clean prominence of 2178 feet. Listed at number 70 out of the 82 that have at least two thousand feet of prominence. It is fairly low on the list but it was the fact that it had the designation of being a prominence peak that made me want to go see what it was like and visit this seldom visited range. Rather than go into what prominence is, I will link you to a good site HERE which covers what prominence is and why some of us enjoy chasing prominence peaks. I also found a range that is remote, isolated and pretty much ignored. Fossil seekers have found some success on the western side but most fossil seekers head elsewhere in the western Utah desert.

It has a history of a mining past and it is wise to avoid old mines and shafts should you encounter them in your explorations of the area. Today sheepmen still run flocks of sheep on its western and southern flanks. I noted a large flock during a visit in November of 2007. However, for the most part, few people today venture into the heart of the area. When I signed the register atop the peak, I was only the fourth party to visit the top in the past ten years. It had been six years between the first and second signees but despite that fact, a huge cairn had been built on an adjacent part of the highpoints ridge.

Mining in the area was reported at Joy by John Van Cott:
"Joy (Juab) was a small mining settlement in the Drum Mountains near Mount Laird, southeat of the Fish Spring Range. Today it is a ghost town site thirty miles northwest of Delta. Harry Joy was a mining engineer from Detroit, Michigan. In 1872 he and his partner, Charles Howard, organized the Detroit Mining District with the new town of Joy as its center. Isolation and the cost of transporting ores and supplies forced the mine to shut down. The town subsequently died out."

Here is another link that provides some insight to the background of the area along with many good pics. 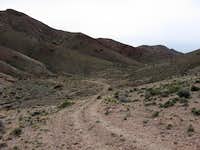 The best way is to head south from Provo (or Salt Lake city) on 1-15 and take the exit for Delta found at Nephi Utah. Take exit #228 and get on Utah highway 132 and head southwest for Delta. At Lynndyl (34 miles from Nephi), take a left onto highway 6 and drive just a few miles (???) to the junction with highway 174 and you'll see a sign indicating Topaz mountain. It is just beyond the MP marker 100. Turn right and take this road (also known as the brush highway).The distance to the turn off for Topaz mountain is 37 miles but the turnoff to get to the north side canyon of the Drums is before that.
See the map I have posted and you might find it helpful to GPS the junction
which is unmarked and turns onto a dirt road. BTW, this road is paved all the way to this turnoff which is very nice. Along the way you will pass the Electrical generating plant as you head northwest on this paved road, normally noticeable by a tall stack with steam emanating from it.

From the turnoff, it was about three miles to another turnoff, also best noted with a GPS waypoint. Note the picture that shows this road and my truck. The road becomes rocky and rough but 4WD is not required although
high clearance is. The distance to the mouth of the canyon is a bit around two miles and then another mile to where I parked was less than a mile so you can park just about anywhere and begin from there.

It is roughly 112 miles from Provo to the area where I parked to climb the mountain. Less than six miles of the whole trip was on dirt roads with three of those miles going from the paved section mentioned to the turnoff for the jeep road (see gps coordinates on this pic). 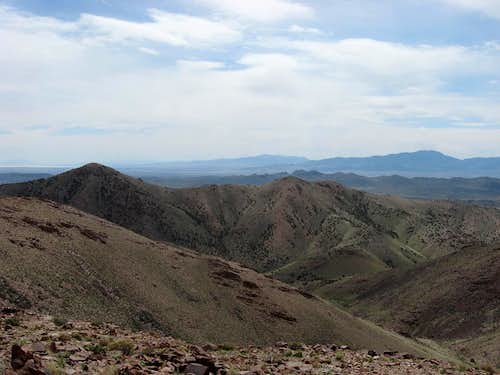 The area is BLM land with no restrictions as far as I know. 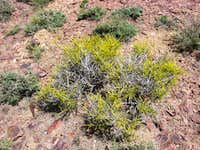 A great camping spot was available where I parked to begin my hike but on BLM land you can camp just about anywhere. There are no developed campgrounds and the nearest motels would be in Delta. Also a good idea to make certain you have a full tank of gas and plenty of extra water in your vehicle. 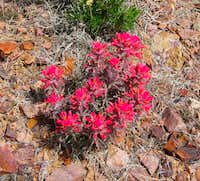 Weather ( Delta is the closest resource) 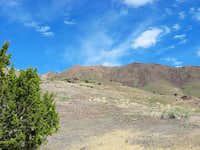 This mountain could be climbed from the northwest, the northeast, from the east or as I did, from the west. If you will look at the map I've provided,
you can get a basis idea of the way I went. Several of the pictures I've added to this page also are based on the way I went. Nothing is difficult, 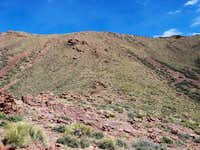 nothing is beyond a class one althought it does get steep on one section and withouth snow, that section is easy to deal with. Distance on my route is about three miles round trip with under two 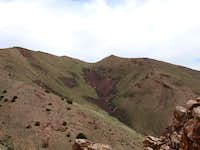 thousand feet of elevation gain. Not a hard hike but the getting to this one is most of the adventure. check back later for the rest of the route information. No need to post a detailed route page for this basic hike.

Ken Jones put up a nice GPS track at peakbagger.com for this one. Check it out if you use GPS technology and can download the track into your GPS.

Eric Willhite also has put up a fine trip report with pictures and maps that go into detail about his visit.  You can find that trip report HERE.

Map for area including key junctions 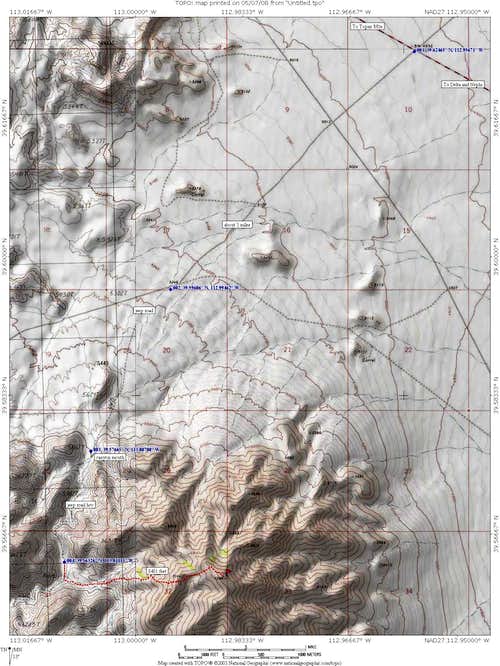 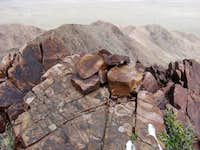 One of the things I always do when I reach the top of a peak is to look for a register, often hidden nearby or a benchmark. As I found no benchmark, I was
pleased when I found a small register tucked away in the confines of the summit cairn. Upon opening the baggie which contained the register pages originally placed by John Vitz on his visit in 1998, I was surprised to see only two other entries. I photographed all three and have placed those here in this section. This is a fragile register and was beginning to show signs of deterioration. I found out that Greg had replaced the baggie in 2007 and I now carry a container with me to put such fragile registers into.
Sam Grant could find no register on his visit so anyone planning on doing this one in the future would be deserving of an "attaboy" if you take a register along with you to put up there.

Also, Lists of John also has a summit register for those who utilize this fine website. You can't view who has signed the list unless you are a dues paying member.

Peakbagger.com has a list of those who have visited the summit.

This additional information on the "drumming"comes from SP member Scott Patterson:
"More than Legend: The legend of the drumming noises is actually genuine and also reported in the nearby House Range as well. I have not heard the noises myself, but family members (much of my family is from Delta and my uncle has talked about them) and other locals have. The rumbling noises have been a mystery for a long time and were even featured on Ripley's Believe it or Not.

There have been many theories, but the most plausible theory in recent times is from geologist who theorize that these mountains are so pocketed with caves and crevices that when sharp changes in barometric pressure occur (such as before or during a front) that air moves under the surface in these mountains and its enough air in all these pockets to cause a rumbling when escaping to the surface.

Combine both Drum Mtn and Keg Mtn on the same day.

If you start early, you could easily get both of these mountains on one day.
The distance between the two is roughly 15 miles. I'll see about adding a map that will help in this regard.

As road conditions can change and hiking, climbing or traveling in this type of country can be inherently dangerous, the above information is provided only as a courtesy. You accept all risk and responsibility for your activities in this area and I recommend that you let others know of your plans and where you will be hiking/climbing prior to heading to this area. Be self sufficient and carry plenty of food, water and shelter in the event of a breakdown. Good quality tires are a necessity on the rough and rocky roads you will encounter as is a vehicle in good condition. Roads may become impassable when wet. Avoid the area during electrical storms and avoid high ridges &exposed areas. Having said all that, have a good trip and please let the author of this page know of changes that you encounter.