This page is the attempt to complete the ranges of the Eastern Alps => I am looking for images (and also information) of Wechsel, Leithagebirge, Rosaliagebirge etc. to improve the page...

The Mountains east of the Mura are part of the Central Eastern Alps and consist of mountains and ranges eastwards the rivers Mura (Mur), Mürz and Semmering Pass - the exact borders are mentioned in sector Range Boundaries.

The most important subranges/areas are: 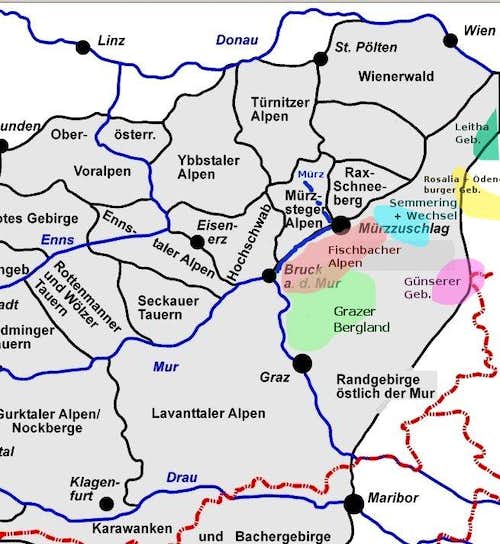 Subranges and Subareas of Mountains east of the Mur (Mura)

Due to the hilly character of all subareas Hiking (on often well marked trails) is the most important alpine activity. Climbing Areas and Sking Resorts (also Ski Randonee) are in Grazer Bergland and Fischbacher Alpen - also Semmering and Wechsel.

The rivers Mur (up to Bruck an der Mur) and the river Mürz (to Mürzzuschlag) are the westward/northern borders of the Randgebirge östlich der Mur - continuing via Semmering and Gloggnitz to the Vienna Basin (Wiener Becken) to Bruck an der Leitha via Lake Neusiedl (Neusiedler See) to the Pannonian Basin (Pannonisches Becken) back to the river Mur.

Important junctions are Vienna and Graz. Detailed information will be mentioned in each subarea sections

All subareas and surrounding valleys are (more or less) well developed for tourism. You can stay there in many hotels, B+Bs and camping places. Meanwhile the covaerage with moutain huts is quite poor. In the low season it might be difficult to find a place to stay at reasonable costs.

A mountain range southward and parallel the river Mürz, that is mainly wooded and alpine pasture.

Getting There
Fischbacher Alpen are reached via A2 Südautobahn and S6 (Semmering Schnellstrße - Semmering Highway). Mürzzuschlag, Spital am Semmering and other towns in Mürztal are near the Austrian southern Railway.

Actually not a range or mountain - but an important connection between Styria and Lower Austria (nowadays crossed by road, highway and train).

The travel experience that the Semmering Railway offered (and still offers) was in significant contribution to the development of tourism in the Semmering region in the 19th century.

The roads and trails (where permitted) are popular biking and mountain biking destinations.
Mostheurige (cider or must made of apples and pears) are charactaristic for Bucklige Welt.

Rosaliengebirge offers nice and easy hikes (might be interesting for mountain bikers).
I did some short hikes there in March 2016.

Subranges to be added