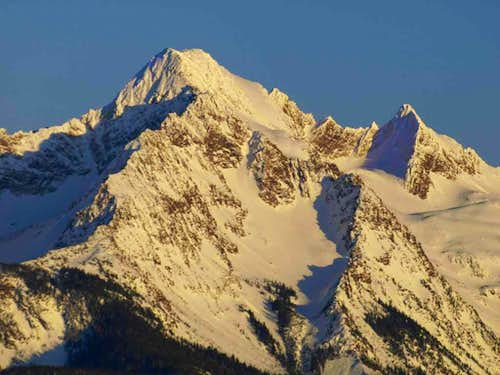 The West Face And West Ridge

The South Twin is the highest point along the strikingly jagged ridge known as Twin Sisters Range, 10 miles southwest of Mount Baker. With its considerable 3520 feet of prominence, the South Twin is a major peakbagger destination, especially for those who are working on prominence lists. It's worth mentioning early on in this description that the west ridge offers some of the finest scrambling to be found anywhere in the state of Washington. 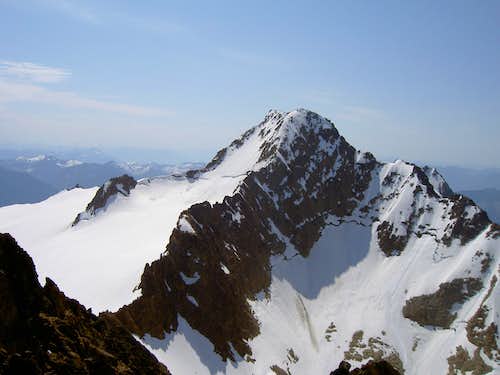 The North Face Seen From The North Twin

The orange-yellow rock in the Twin Sisters range is primarily composed of Olivine and is extremely solid. Good holds are frequent and everywhere you place your hands it feels like 50-grit sandpaper. On the northeast face of the South Twin, the Sisters Glacier is the largest in the range. The north ridge is connected by a saddle to the North Twin while the south ridge branches off to connect with Skookum Peak and several other unofficially named peaks in the range.

The South Twin was first ascended by J. M. Edson, E. A. Hegg and P. J. Parris on August 1st 1891. The North and South Twin are highly visible from some of the hills in Bellingham and especially striking from the San Juan Islands. For those who climb the Coleman-Deming route on Mount Baker, the impressive eastern aspect of the Twin Sisters Range dominates the view. In fact, Fred Beckey mentions in his Cascade Alpine Guide that Edmund T. Coleman himself upon climbing Mount Baker commented on the impressive profile of these peaks comparing them to the Aiguilles Rouges as seen from Chamounix. 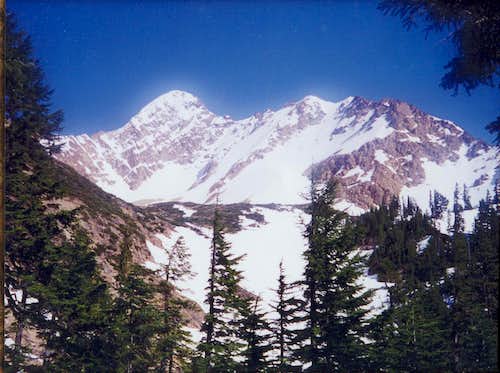 The Upper Basin And West Ridge

There are many route options on the South Twin ranging from Class 2-4 all the way to glacier climbing and Class 5. The North Twin to South Twin traverse is a good option but a rope and protection are necessary for that. Just like the North Twin, the most common and straightforward route is the West Ridge. 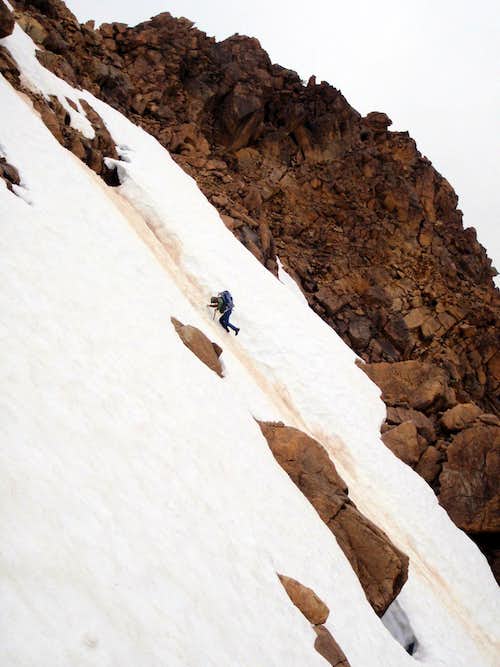 Steep Snow On The West Ridge

At first this route utilizes a system of old logging roads coming up from Dailey Prairie. From there an overgrown climbers path (extremely overgrown now and challenging to follow) leads through dense forest to the base of a talus slope below the western basin located between the North Twin and the South Twin. 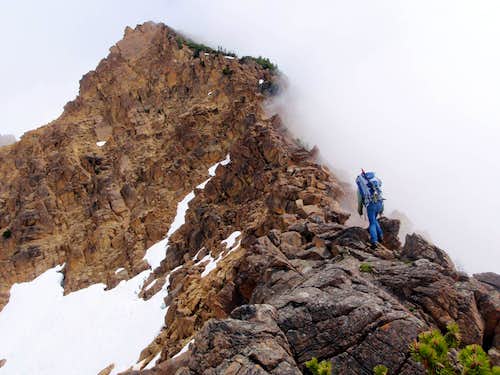 Entering the basin, there are several different points at which one can gain the top of the ridge. Depending on the season, either scramble up steep rock or climb up steep snow to the ridge crest. Gaining the ridge from further up in the basin will likely be a matter of climbing 40 degree (pictured above) snow but the run-out is good. 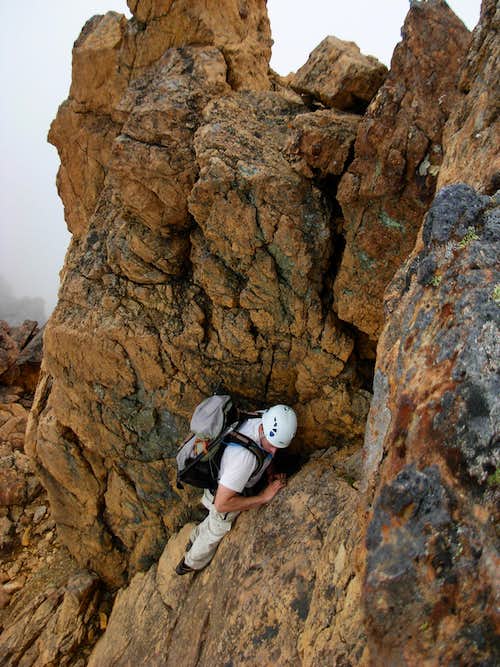 Downclimbing The Step At 6200 Feet

Scramble eastward staying on or near to the crest and dropping down a little onto the south side as obstacles bar the way. For those that enjoy scrambling this route is a real treat. For those that shy away from exposure and or lengthy scrambles, this route will be nerve-wracking. 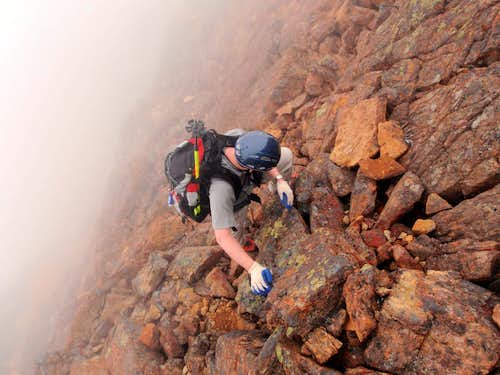 Exposure On The West Ridge

At 6200 feet there's a 15-foot step which can be down-climbed. There might be a way around this on the south side but it will make for a long detour. Beyond this wall follow cairns through some exposed ledges on the southern side of the ridge. 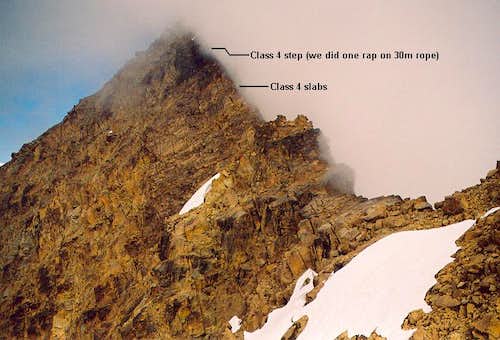 Crux Moves Near The Summit

Then at 6600 feet there is a high notch in the ridge. The last 400 vertical feet are steeper and more exposed than the rest of the route (perhaps 5th class). If you stay on the ridge crest it is advisable to use a rope. To avoid this section, traversing around a snowfield (seasonal) out onto the south side of the ridge and scramble up southern gullies to the summit.

Most climbing routes are approached via Dailey Prairie. Because of the long-distance covered on logging roads it is recommended that you take a bicycle so that on the way out you can roll down to your car. Also many stretches of the logging roads can be ridden uphill. There are several different ways to access Dailey Prairie but the best is without a doubt the Middle Fork Road that has access to a bridge that crosses the Middle Fork Nooksack River. This access has considerable less distance and less elevation gain than the other options. 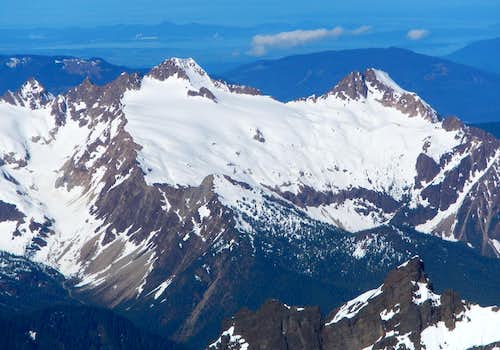 South Twin And North Twin From The East 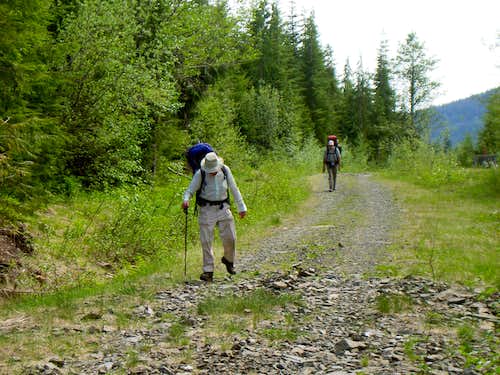 No parking passes are required to park at the gate. If the gate is open, enter at your own risk, it may not be open when you leave. Certainly do not block the road anywhere you park or expect to be towed and heavily fined. Relations between climbers, the logging companies that own the roads, and Olivine Corporation who owns the land have traditionally been turbulent, Please do not give them reason to restrict all access to climbers. Keys are no longer given out for the North access (Dailey Prarie) due to concerns of illegal garbage dumping and traffic during mining and logging operations. The South gate (accessed from Hwy 20) is manned, and they may grant access if you are polite and courteous.

The north approach lands have been owned by Longview Fibre for quite a few years. Longview Fibre contracts out logging work in the area. Oliving Corporation is not the land owner.

Sadly, Longview has recently been sold to Weyerhaeuser.

Is that better or worse, for people looking to get access to privately-owned forest lands? I know some hikers who have thought Longview was very difficult to deal with.

So apparently Weyerhaeuser now owns and controls this access road (to the Sven Larsen Quarry). There is a sign posted at the gate on the bridge that states the following: No Trespassing - Private Property - Violators Will Be Prosecuted Under State Criminal Codes - PERMIT REQUIRED FOR ALL ACCESS - Weyerhaeuser Columbia Timberlands - For more information: 360-442-7619 or http://www.WYRecreationNW.com Looking on their website it appears you can purchase a permit for your vehicle (and they send you a gate key), but it's only good for you, your spouse, and related kids (so no, you can't bring along your climbing buddy). The permit is good for one year, but costs $250 (and of course they're sold out for this year (until renewal time next May). There are non-motorized day permits available for $75 but you can't camp or spend the night (and you can't ride in your buddy's vehicle that purchased a motorized permit). We pushed our bikes up the road last Sunday evening, and we were accosted by a security gal in a truck. She explained all of these new rules to us, but thank god she was nice and let us go "this one time" since we were just climbers heading for the South Twin Sister. Whew! There needs to be some sort of exception for climbers here as the Twin Sisters range is pretty much inaccessible for us these days (unless you bushwhack in from the East from the Elbow Lake trail).

Thanks for the update carppdiem.