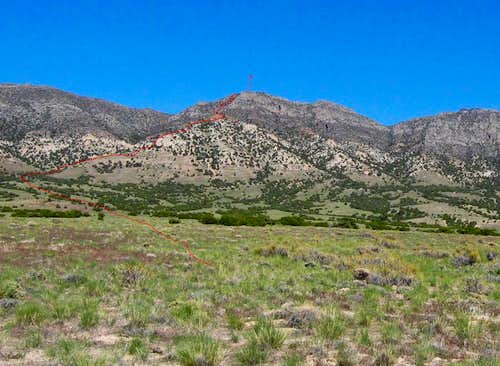 Another mountain range in the western desert of Utah, the Tunnel Springs range is another of these relatively unknown mountain ranges to residents of the Wasatch front. And understandably so, this one is pretty isolated although Crystal Peak sits near the northern part of the range and little information
can be found on this range outside of what I will be able to share. Tunnel Springs HP is another of Utah's prominence peaks, coming in at #56 on the list.
with a clean prominence of 2430 feet.

From the US Forest service comes this information:
"The Desert Experimental Range is in Pine Valley approximately 70 km (43 miles) west of Milford, Utah. It is geographically a nd floristically representative of approximately 200,000 square kilometers (77,220 square miles) of the Great Basin, an arid region of the Western United States comprising a series of north- and south-aligned ranges and closed basins. It was established in 1933 when President Herbert Hoover withdrew 225 sqare kilometers (87 square mile sections) from the public domain "as an agricultural range experiment station." Construction of an office, living quarters, support buildings, well, tennis court, major roads, and over 190 km (118 miles) of fence were completed before 1935 by a large camp of the Civilian Conservation Corps.

These facilities have allowed the Desert Experimental Range to serve not only as a year-round research center at a remote location, but also as a range ecology educational facility of international significance. Appropriately, in 1976 the Desert Experimental Range was designated a Biosphere Reserve by the United Nations Educational, Scientific, and Culture Organization (UNESCO) under the Man and the Bioshpere (MAB) program. Currently, it participates as one of a handful of Biosphere Reserves representative of cold-desert biomes worldwide and is unique in this respect in the Western Hemisphere." 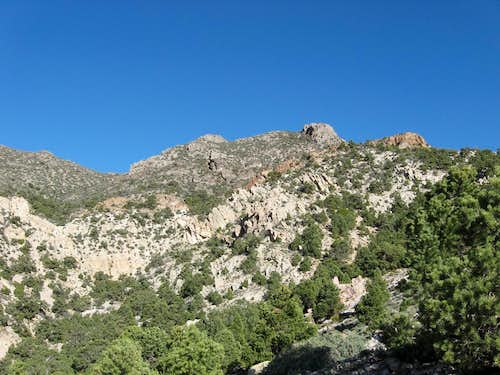 From SLC and Las Vegas, take i-15 to Beaver Utah and exit onto highway 21 that heads for Milford. Continue on through Milford heading west on 21 towards the Nevada border. You'll be looking for a turnoff about 60 miles from Milford at a place called Mormon Gap Reservoir. See the area map for a
GPS waypoint. My GPS waypoints are lat/long nad 27 so set your GPS accordingly. The main road that goes northeast is a dirt road known as
"Cowboy Road". Get on the dirt "Cowboy Road" and follow it about 7 miles to an intersection shown on TS map one as 002. From there find a dirt track that heads east, crosses a draw (drops in and out of it) and go to waypoint
003. A road heads NE from 003 but will fade in about 1/2 mile. We continued
to drive until we reached 004 where we bush camped. A very faint track led to this point and was lost but a spot with some trees provided a reasonable place to camp and do the hike from.   I had one person report to me that they couldn't find the "faint track" and I'd recommend that you could begin your hike from any point that you deem reasonable.  See Sam Grant's GPS track on peakbagger.com for clues on how he did it. His visit was in May 2015. 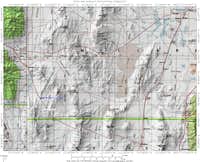 As we did this hike from the west side, we headed for the ridge that you might call the northwest ridge. It provided a reasonable way to access the summit ridge and was mainly class two with a few spots of low class three.
Loose scree was a problem in several spots but overall, the route went nicely and will be illustrated in one of my pictures. Our distance was about 5 miles round trip with 2000 feet of elevation gain. On top of the peak you will find a benchmark and a register. I will cover the route a bit more in my upcoming trip report and I should mention that it is probable that you could find a route up from the east side of the range as well. The second map has a representation of the route that we took. Basically, just follow the ridge as shown in the picture at the top of this page.   Not many people have done  this peak,  less than a dozen (circa 2015).  Please share any new information that you can provide if you make the trip to the west desert for this one.

Map two with our route 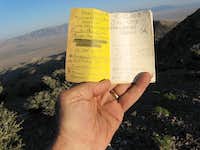 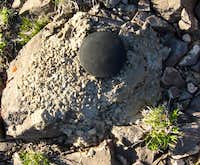 The views from the summit are outstanding and this is one of the rarely visited peaks in Utah that have over 2000' of prominence. The register was placed in 2003 and there was a gap of 5 years until the next visitors signed in. Here's what I've compiled from the registers on peakbagger and Lists of John:

Not a lot of visitors but you can be sure that peakbaggers like Ken Jones, Dennis Poulin, Eric Kassan, Zeejay will be adding their names to the register. Its just a matter of time. : )

No red tape that I am aware of. No fees or private property issues. Note that the hike described is from the west side. 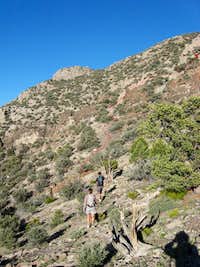 Greg and Kadee on way up

Campgrounds can be found in Great Basin National Park in Nevada and there are four to choose from (click here for information)and those are the only organized campgrounds within 50 miles of this peak. Combining a visit to the Great Basin National Park is really a no brainer if you haven't been there before. One campground is at 10,000 feet and is choice due to the proximity of Bristlecone pine groves. Just a thought. The area that Tunnels Springs Peak is on is controlled by the BLM and the US forest service (experimental range) but on BLM land, you can car (or bush) camp just about anywhere. Leave no trace ethics
should be followed and all your trash should be taken out. 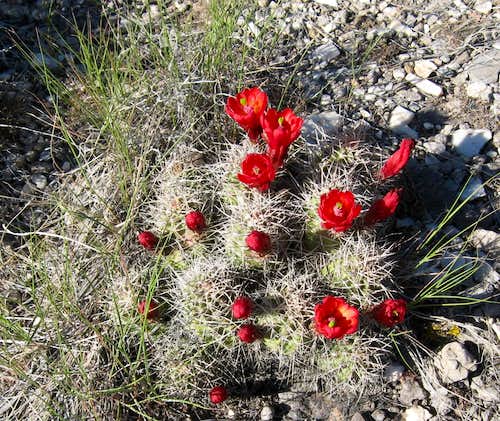 
The US Forest service provides the following info about the vegetation:
"Vegetation
Native vegetation for the alluvial slopes and valley bottom that make up about 75 percent of the Desert Range comprises relatively few perennial shrubs, grasses, and forbs, commonly referred to as the salt-desert shrub vegetative community. Dominant shrub species are short, approximately 25 cm, and include shadscale saltbush, winterfat, budsage, and low rabbitbrush. Larger shrubs that become important on upper alluvial fan sites and in washes include Nevada ephedra, rubber rabbitbrush, and desert almond. Primary grasses include Indian ricegrass, bottlebrush squirreltail, galleta grass, sand dropseed, purple three-awn, and blue grama. Gooseberryleaf globemallow is the most widespread perennial forb. Important annuals include cheatgrass, halogeton, and Russian thistle, all nonnatives. Numerous distinct combinations of two to eight dominant species and near monocultures are common.

Animal life: We did see many proghorn antelope and noticed droppings from them just about everywhere. Deer and mountain lions most likely inhabit the area as well.


I can tell you though, if you camp out here you will see the skies like you rarely can since there is no light pollution at all. The milky way will knock you right off your feet. Incredible is what I kept saying. Be aware that proghorn antelope love this area and they poop everywhere so finding a poop free place to put your tent requires effort (and some groundskeeping).

Prominence has been covered on other pages and to some it is kind of a silly aspect of peakbagging and to others, it is a serious yet fun thing to do. Prominence peaks are generally the peak with the best viewpoint since it is the highest point in a range. Additional information on prominence can be found at this informative website.

Planning is now more important than ever as you try to save gas by combining
peaks that are in the same area. Here is a list of peaks in the western part of Utah that you might find interesting to add to your agenda and you can refer to the map below for a feel of locale:

Watch for wild horses and proghorn antelope in these areas. They not only are beautiful animals, they are a treat to see in the wild. 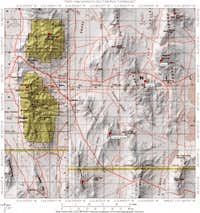 I will recommend that if someone comes out to the western desert that they need to be prepared. Plenty of gas (fill up before you leave Milford, Delta or wherever. Have plenty of water, an extra spare tire that is filled with air and even a second spare tire. Let people know where you are going and when you will be returning. Your cell phone will not work out here and once you leave highway 21, you may not see another person in the backcountry for days. This is an isolated area and the nearest towns of Milford, Delta and Baker (near the entrance of Great Basin National Park) are
the last vestiges of civilization.

Hiking, climbing or traveling in this type of country can be inherently dangerous, the above information is provided only as a courtesy. You accept all risk and responsibility for your activities and again, be self sufficient and carry plenty of food, water and shelter in the event of a breakdown. Good quality tires are a necessity on the rough and rocky roads you will encounter as is a vehicle in good condition. Roads may become impassable when wet. Avoid the area during electrical storms and avoid high ridges &exposed areas. Having said all that, have a good trip and please let the author of this page know of changes that you encounter.