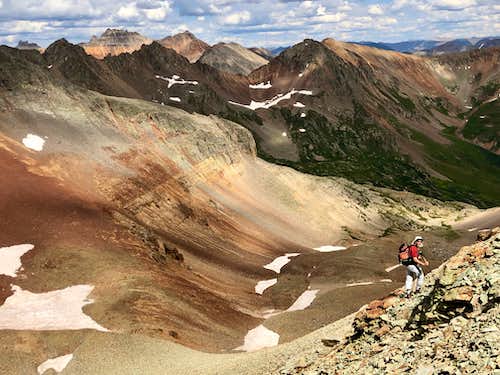 Up V 10 with Vermilion Peak in the background 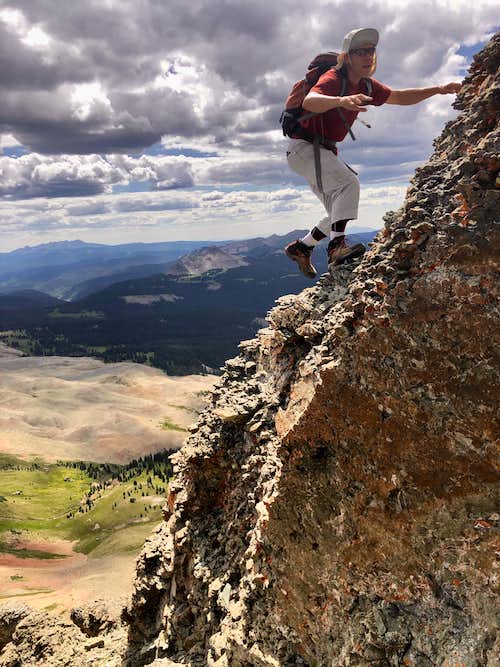 V 10 scramble sections are loose and exposed
V 10 is a remote 13er located in San Juan Mountain Range. V after Vermilion Peak. The San Juan Mountaineers assigned an alphanumeric designation to select unnamed peaks. V means the peak in on the old 15-minute Vermilion quad. 10 because there are other peaks numbered 1-10.

V 10 could be combined with Grizzly Peak B. The initial approach is along Colorado trail, but higher up there is a lot of bushwhacking, thick willows and loose gravel.

This peak is seldomly climbed due to its remoteness, loose terrain and class 3 scramble.

Colorado Rank: 271 (not on lists of those seeking centennial and bicentennial summits = highest 100 and 200 peaks in Colorado).

From Durango drive 28 miles north on US 550 to Purgatory Ski resort. Turn into the ski resort, follow directions for the upper parking lot. At 0.3 miles turn right on Hermosa Park Road, FSR 578. It is signed. At 3.6 miles turn right onto Relay Road, FSR 579. At 4.8 miles go right on Cascade Divide Road - again it is signed. The road becomes more rocky at this point and it does take a long time to reach the trailhead at 15.4 miles. Allow 1.5 hrs from Purgatory.

You need 4WD high clearance vehicle for this one. The views of Engineer Mountain from this road are amazing as you circle around and behind it. 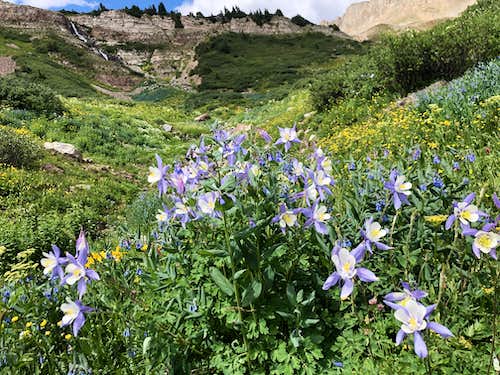 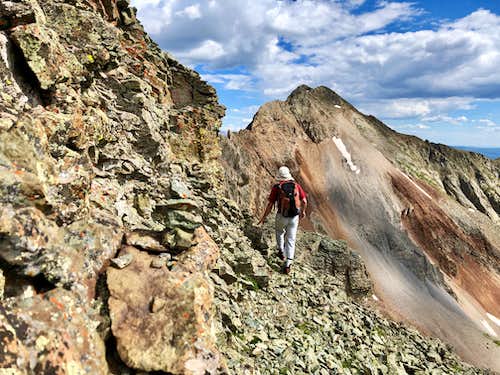 V 10 with Grizzly Peak in the background
I recorded our route on Gaia, but for some reason I have erased that information. So, description below is as best as I could remember. I chose the easiest route because even that one offers plenty of exposure, looseness and scramble, and really bad section of willow bushwhack. I did not combine it with Grizzly Peak B because I have done this peak before.

The first half of the hike is great. It follows Colorado Trail as it gently goes up and down. Colorado Trail is a popular trail running from Denver to Durango. It is in great shape and this section is often mountain biked. Once you reach Cascade Creek, big turn in the trail and a nice bridge over the creek, you leave the trail and bushwhacking begins. Follow the Cascade creek into a basin above. We went up on the west side of Cascade Creek and ended up torturing ourselves in willows for a long time. We chose to go on the east side of Cascade Creek back and the going was much easier.

The basin along Cascade creek opens higher up, lots of beautiful wildflowers in the season, waterfall, very scenic and no people. Ascend west past the big waterfall on the west side into another basin, this one is mostly filled with rocks. We were lucky and were able to walk on solid snow fields, which made it easier. Continue to the west basin - V 10 peak is now south of you. Ascend the steep rocky section of V 10, watch out for rock slides, head for the weakness on the ridge. Once on the ridge walk west to the main summit of V 10. The ridge section is fun, loose and exposed. Be careful here. To reach the ridge was annoying due to looseness of the scree.

I charted on Gaia my appropriate route and erased my true recording, therefore it looks different. I roughly followed the drawing below. Again, to AVOID the worst willows, go on the east side of Cascade Creek. 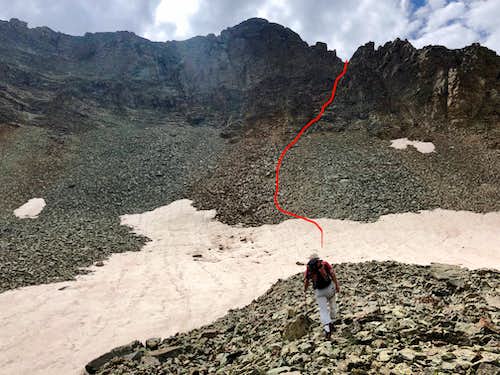 There is no charge for driving to the trailhead, camping, or hiking. Peak is located in San Juan National Forest (no wilderness rules apply, but keep the area clean and pristine). 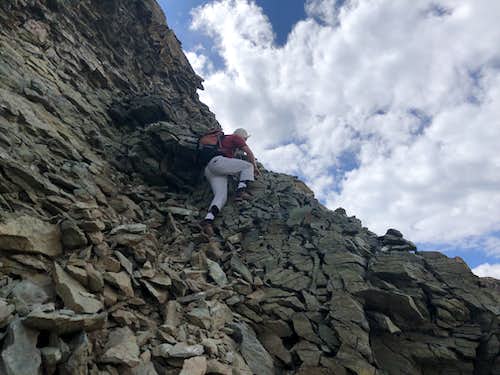 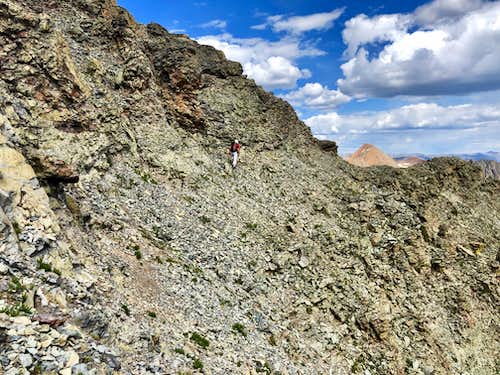 V 10 traverse on loose terrain
Summer and early Fall are the easiest times. Early summer could be excellent when the slopes are still covered with snow (I personally rather go up snow than loose gravel. We caused a few rock slides on the ascent of this one.) Winter means very low approach since Cascade road is closed (add 15 miles each way) and high avalanche danger.

There is great camping along the Cascade road when you drive in - these are primitive campsites and no fees. I have camped at the end of the road. There are many backpacking opportunities along Colorado Trail.