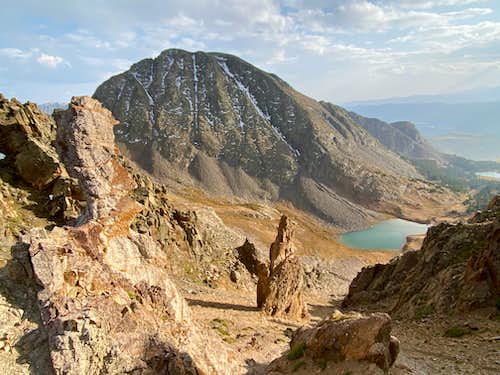 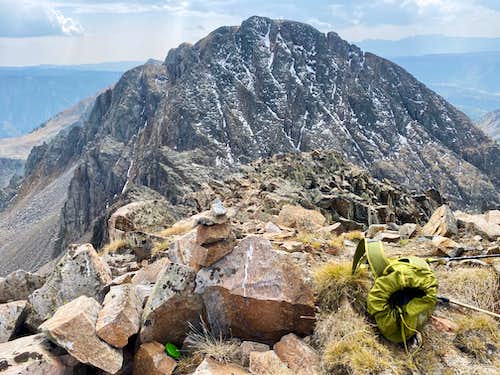 West Needle Mountain
West Needle Mountain is a 13er located in West Needle Mountains, San Juan Mountain Range. It is a pretty looking peak, but hidden behind Twilight 13ers and only infrequently summited. Most people do it in combination with Twilight peaks and as an overnight trip. There are nice backpacking sites along Crater Lake. I have chosen to do it as a day trip since I have already hiked up Twilight Peaks and I did combined it with Unnamed 12932 Peak.

Weminuche Wilderness: in 1993 Congress expanded the Weminuche Wilderness to include the rugged West Needle Mountains, wedged between a deep gorge of the Animas River and Lime Creek south of the Molas Pass. Only one trail, Crater Lake Trail, penetrates this segment of the wilderness.

Andrew Lake Trailhead: Located on US highway 550 is 8.5 miles south from Silverton, just past the summit of Molas Pass. The trailhead is well marked. There is a paved road to the parking lot. Parking is free. 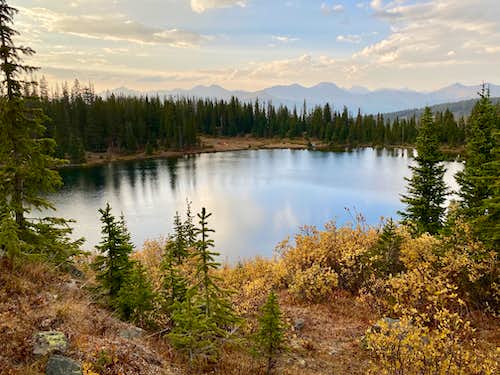 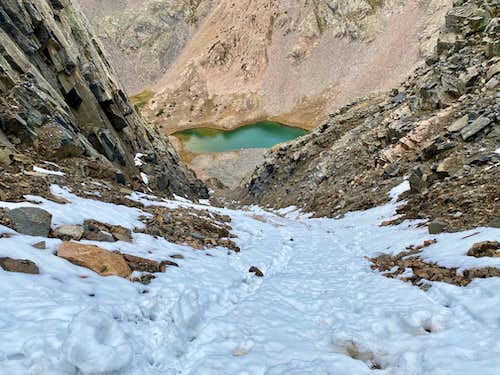 NW couloir
Hike to Crater Lake: this is a popular hike and expect people along this nice trail. Crater Lake is a well liked backpacking destination. The whole trail is at high altitude. Trailhead is over 10,000 feet high and the trail is easy to follow. It is about 5.5 miles to the Crater Lake.

The trail starts from Andrew's Lake, it skirts along its west shore, crosses a meadow and then you enter switchbacks in tree covered hillside. It gains 450 feet in 1.2 miles. Views from meadow around Andrew's Lake, along with intermittent views from switchbacks include West Turkshead Peak and Grand Turk to the north, Twin Sisters and Jura Knob to the west and Snowdon Peak to the southeast. From the top of the hill the trail drops 240 feet into a drainage traversing pretty meadows. A second climb gains 370 feet reaching the top of a hill at 2.4 miles. You start to get views of Engineer Mountain, and as the trail swings east views open to North Twilight Peak to the south. At 4.0 miles you enter heavy timber and you stay in the woods. At 5.1 miles the trail drops into a small depression, skirts a marshy area on the east side and then climbs over a hill to the basin holding Crater Lake. Crater Lake is located at altitude of 11,640 feet and at 5.5 miles. North Twilight Peak rises to the southwest and forms a perfect backdrop for this nice lake.

Parking, hiking and backpacking are free.

Summer and early autumn are obviously the easiest times to explore this area. The trailhead is accessible year round, but the approach would be long in the winter. If traveling in winter times, check North San Juan Avalanche report.

There is great backpacking along Crater Lake, and also along the Crater Lake Trail. Developed campground would be at Molas Pass.