East of Passo S.Giacomo, at the end of Val Formazza (Italy) in the Lepontine Alps, two important ridges detach from the main ridge of the Alps:
one goes toward east and becomes the south margin of Val Bedretto (Cristallina subgroup) and Val Leventina (Ticino - CH)
the other one goes toward south dividing Val Formazza (west) from Val Maggia (east).
On this south ridge grows the huge summit of Basodino
It has a long summit ridge with many minor summits and 3 main sides quite different each other 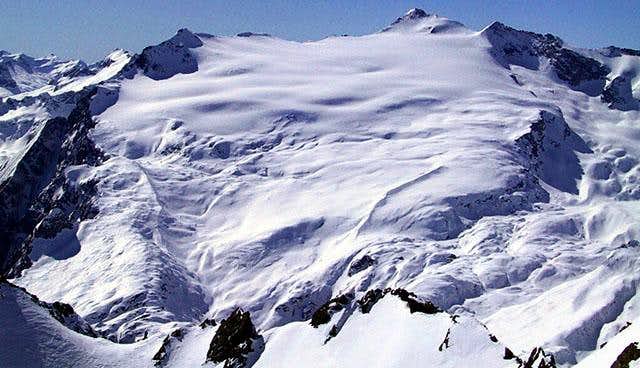 the north-eastern side with a relatively big gletscher

the south side, craggy and wild

the south-western side, fairly steep and homogeneous

from Italy
Val Formazza
Along the Simplon highway till Preglia - than follow for Crodo - Formazza - cascate del Toce (wonderful site) and on to Riale
till Rifugio Maria Luisa in Val Toggia (2157 m) - the road is normally open only till Riale in spring.

from Switzerland
Val Maggia
From Locarno to Bignasco and, trough Foroglio till S.Carlo (936 m)
here you must start walking till Piano delle Creste (2108 m)

Val Bavona
as above till S.Carlo then follow the mule track till Capanna Basodino (1856 m) - in 2 hours
or, using a cable car in 10 minuts

Val Bedretto (info from Alpenkalb)
1. Basodino hut. From Airolo go to Ossasco (bus or car or walk). Follow the trail to the Cristallina hut, contunue to the Cristallina pass.
Ski down to the Sfundau Lake, Pioda and reach the Basodino hut. Full day from norhtern Switzerland.
Can be combined with a climb of Cristallina.
2. Maria Luisa hut. From Airolo drive to All'Acqua. Walk over the Giacomo pass (frontier between Switzerland and Italy). Go down to the hut.
A round tour starting with Basodino hut via Kastellücke is recommended and extremely popular

from Rifugio Maria Luisa
easy as climbing, BSA as ski-mountaneeing
reach the Kastellücke (2718 m) (can be dangerous with unsafe snow), cross steep slopes toward SE till the Basodino gletscher, than get
- the eastern ridge, easy till the summit .or.
- the Passo del Basodino (3158 m) on the northern ridge and with a not easy climb (PD) to the summit.

from Piano delle Creste
along the path to Bocchetta di Tamia then follow the walley between the two ridges to get the Passo d'Antabbia (3033 m) and,
along the ridge with a PD climb (rope useful) to the summit

additional info from Keyser Soze
Due to the melting of the glacier, this route has become more and more difficult over the past few years. The wardens do not recommend it any more. If one wishes to reach the summit from this side, it is wiser to climb Tamierhorn first (E side and S-ridge, F), then head for Passo Antabia and Basodino's South summit (F), before climbing the narrow ridge to the main summit (PD).
According to Giuseppe Brenna's guidebook, there are various other routes to the summit, but they are not frequently chosen. Quite fascinating is mainly the couloir of Cantesc, first ascent by Aldo and Nora Cattaneo (some photos and a description in their incredible book "Storie e sentieri di Val Bavona", Armando Dadò Editore, 1998)

MAPS :
best map for the whole area is :
Carta escursionistica 1:50000 - Valle Maggia e Valle Onsernone (1991) - Kümmerrly+Frey
CNS maps are less useful because this area is divided into 4 sheets : 265, 266, 275, 276
Nufenenpass 1:50000, Eidg. Landestopographie.
Also map with ski routes available. All the ascents from Bedretto, Maggia and Formazza are on this map!!!
(info from Alpenkalb)

When To Climb - Spring