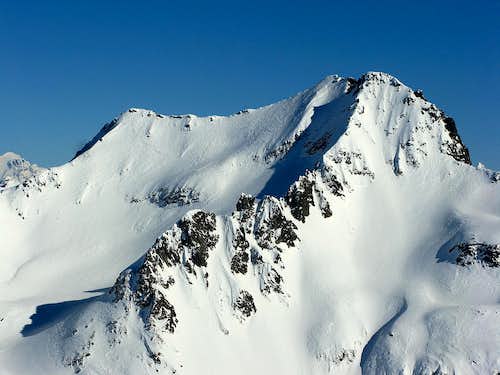 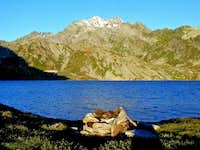 Ticino (Tessin in German) is a wonderful land of granite peaks, clear waters and old, rural architecture. Even if surrounded on three sides by higher mountain groups of the Western Alps, the highest summits in the group still offer great views around. In the mountaineering structure we are usually speaking of Lepontine Alps.

The group has the highest peaks on the north, above the well known passes of Simplon and Nufenen. But in the eastern part the three most prominent summits are: Basodino, Pizzo Campo Tencia and Cristallina. Due to its prominence and not too difficult approach, Cristallina is often ascended. Its season is long as it represents also one of the most desirable goals in times of tour skiing.

Besides the mountaineering part another attraction of Ticino are its beautiful valleys with clear waters, picturesque villages and in southern parts also big lakes. The route to Cristallina peak is not marked (marked are the routes to its very base), but you can follow stone marks and trails. The ascent is more strenuous that really dangerous. It requires some easy climbing only if you find yourself off the trail. In the upper part the mountain is very crumbly. The most recommendable tour is crossing the summit (east ascent - north-west descent or vice versa). That is one of more beautiful tours in Ticino. In addition to have Cristallina as the only goal of a tour, you can also make a few nice, long distance treks through the area, including the ascent on this summit. Treks will lead you through most remote areas, as well as through popular places which tourists wisit by a cable car.

1. Norteast ridge. This is quite a direct, pathless ascent, which however already requires some easy climbing (up to UIAA III degre). It starts on Passo del Narèt, 2438 m, which can be quickly reached from Lago del Narèt. 3 h.

2. East ridge. This is the most recommendable ascent from Lago del Narèt. Also that one is not just easy, some scrambling and easy climbing (up to degree UIAA II) is needed. Together with the route #3 it makes a wonderful round tour. From the start of the SE summit ridge the route is not marked, but we can follow ciarns. 3 h.

3. North-west approach. It starts on Passo di Cristallina, 2568 m, which can be reached by three routes: 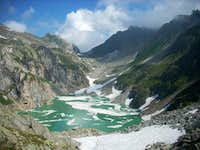 From the saddle we go towards the south-east, more or less directly towards the top. 1 h 30 min, steep walk-up.

Cristallina is one of most panoramic mountains in Tessin/Ticino. Pictures below are just examples to prove this statement.


Central Alps on the other side of Rhone valley. 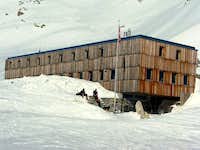 Capanna Cristallina, (2349m), open from June to October, Tel.: 0 91/8 69 23 30; This huge hut has been opened two years ago. It is one of the biggest and most luxurious huts in Switzerland. Remark: The old Capanna Cristallina was destroyed by an avalanche, so temporarily in summer another hut nearby was used as a mountain hut. Albergo Robiei (1900m), open June to October, Tel.: 0 91/7 56 50 20. Keyser Soze: When I climbed the summit in 1997, there was also a little shelter right on top (Rifugio Ossasco), probably originally constructed by the Swiss army.