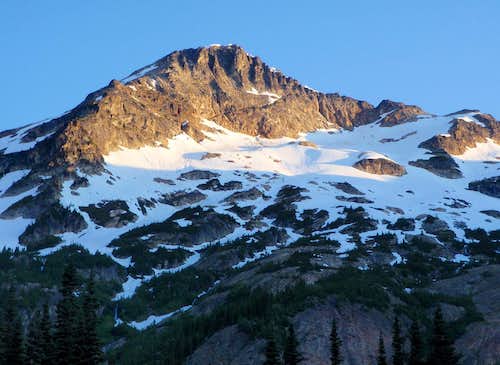 Chiwawa Mountain is a remote peak in the Glacier Peak Wilderness. It has a nice approach trail and can make for a long but pleasant day trip. At 8465 feet, Chiwawa is number 65 on the Bulger List or the 64th highest peak with 400+ prominence in Washington State. Because of this, it is a highly desired destination for peakbaggers. It's not known with certainty when the first ascent was made but it might have been in 1921 led by Lorenz A. Nelson. 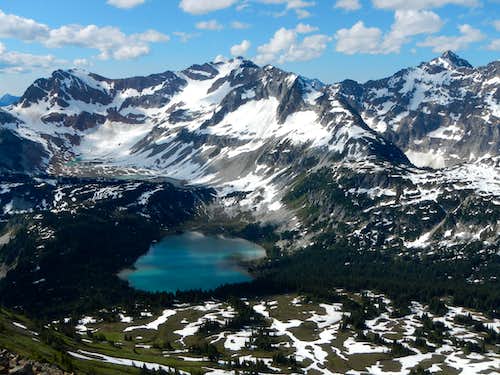 Lyman Lakes Below the North Face

Chiwawa is one of the most well known peaks in the area because of the Lyman Glacier. Every summer, hundreds of hikers travel through Spider Meadows and over Spider Gap to view the Lyman Glacier on Chiwawas northeast flanks. This is one of the more popular hikes in Washington. If your goal is to view Chiwawa rather than climb it, then consider the Spider Gap approach. 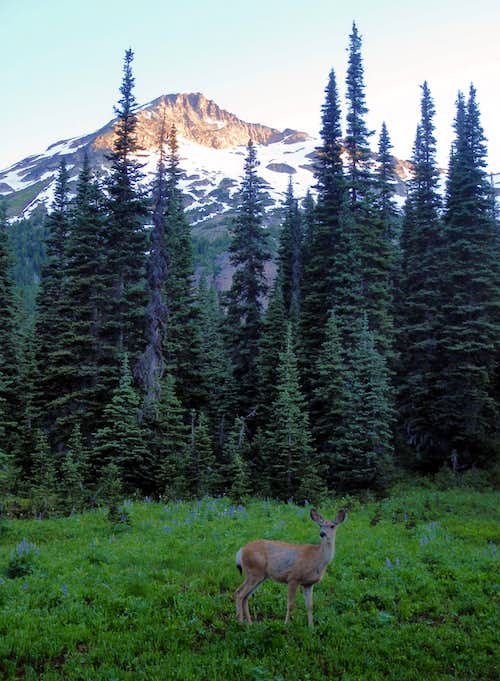 A Deer In Chiwawa Basin

For being a relatively high peak, the standard ascent route is fairly easy. Most parties choose to do both Chiwawa and its slighty higher neighbor Fortress in the same trip over a period of two days. Chiwawa is definitely the easier of the two when approached from Chiwawa Basin. Chiwawa Basin is a lush, unspoiled, alpine meadow, surrounded by high ridges and snowy peaks. Small groves of trees are scattered among wild grasses. The Chiwawa River winds through the valley and deer forage here in the mornings. It is an ideal camp spot.

From Trinity, there are two feasible options to reach the summit. Both routes join together on the final slope below the summit. 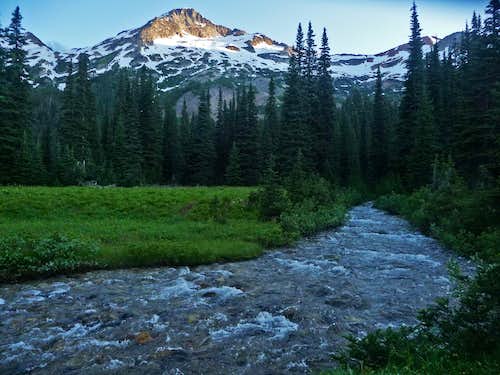 From the junction, continue following the Chiwawa River Trail as it loses a few hundred feet to reach the meadows. The trail will eventually peter out where it intersects the headwaters of the Chiwawa River. You will have to cross this river twice. Once on the way in and once on the way out. It is cold but less than knee deep. You may wish to make your camp on the far side so that you don't have to cross it again to return to camp. Plan accordingly. 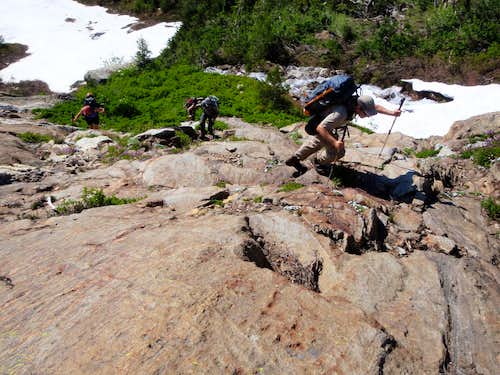 Ascending Slabs Above The Upper Basin

Beyond the river, the next aim is to reach the broad flat basin located south of the summit at 5500 feet. In Chiwawa Basin, two creeks converge to become the Chiwawa River and between them there is a minor ridge. The easiest way to reach the upper basin is to stay near the northern most stream along the east side of the ridge as this is where the trees are least dense. Do not follow the ridge crest here for dead fallen timber is thick. At 4900 feet another creek, which is not shown on maps, comes down from the upper basin. Continue ascending in a northwest direction keeping this creek on your right until you reach the upper basin. 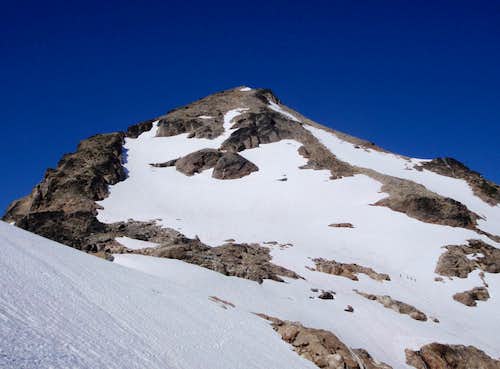 Chiwawa From The Saddle

Many consider this next portion of the route to be the hardest. The head of the upper basin is a mix of slabs, gullies, talus, and heather slopes. Ascending from the right side of the valley will take you into dense scrub trees and a maze of avalanche chutes. It's better to ascend the left side of the head of the basin picking your way up towards the crest of the protruding ridge. 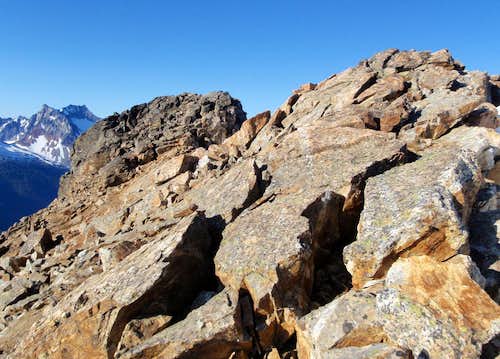 Above 6200 feet, near the protruding ridge, travel becomes easy again. Ascend north by northeast aiming for the Fortress / Chiwawa saddle. From there ascend eastward to the final south ridge. Climb easy snow or scree to within 100 feet of the summit. To avoid steep rock sections, traverse around the west side for the final walk to the summit. There are two summit rocks about 30 feet apart. It's hard to tell which one is highest. 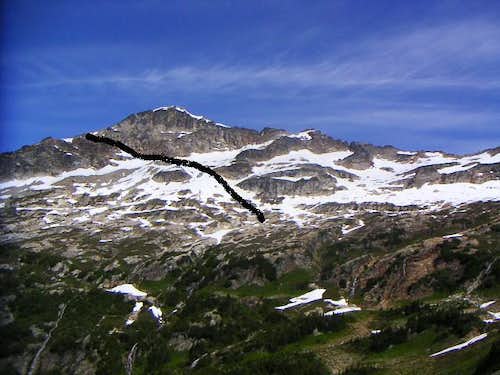 Red Mountain Approach: (Described by EW)
Follow the Buck Creek Trail for about a mile and a half to the junction with the Red Mountain Trail. Take the Red Mountain Trail for 3.7 miles to another split. Here you have two options, the majority of people go left into Chiwawa Basin. This Chiwawa Basin trail continues a mile or more through forests and into meadows toward the Fortress-Chiwawa Col. From that area, just scramble up the southwest slopes to the summit. 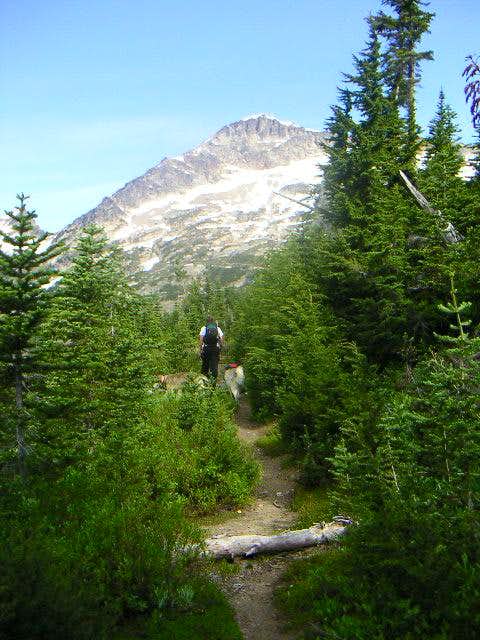 My route took the right fork, heading up toward the eastern ridge of Chiwawa. Realizing this wasn't the best route, I found an easy ledge system to get me over to the southwest side of the mountain (see map and picture). From there I joined the standard route up to the summit. (My friend and dog stayed behind with the camera so I have no pictures from the summit). 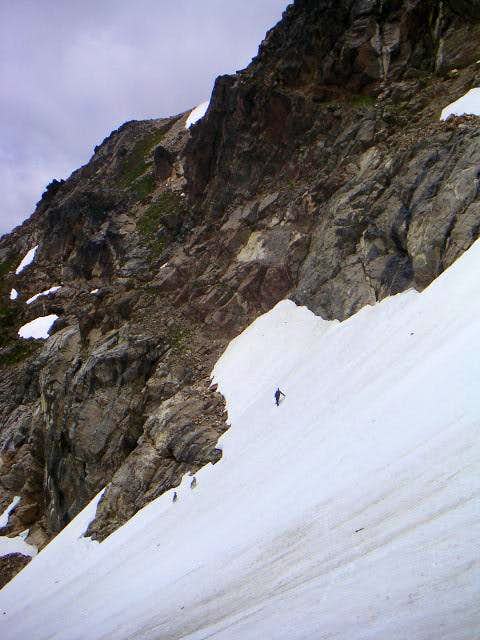 Headed to the ledges

A trail head park pass required. There are a few fee stations on the Chiwawa River Road.

Camping is allowed in Chiwawa Basin and also, there are all kinds of car camping spots along the Chiwawa River Road, some developed some primitive.

You'll probably want to wait until the Chiwawa River Road is melted out to Trinity and beyond. The trailhead is at 2,800 feet but it's pretty deep into the cascades so probably mid-June on the average year. 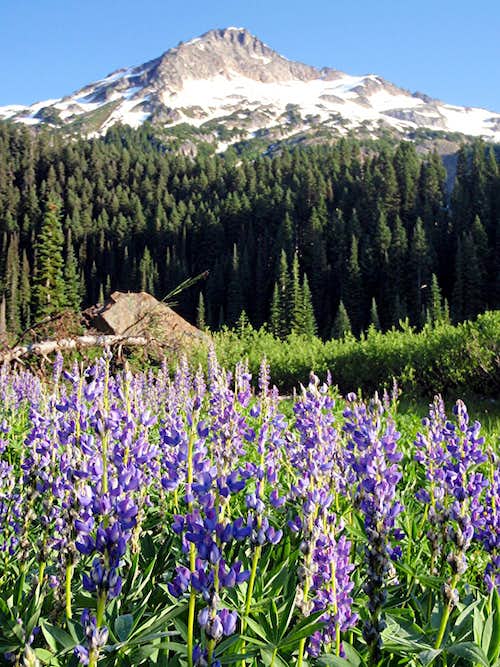 Thanks Eric for the initial work you put into this page!