Greenwood Mountain is one of the Bulger Peaks in the state of Washington, meaning it rises high enough to be considered one of the highest 100. Having 625 feet of prominence above its connecting saddle with Dumbell Mountain, it commands attention rising high above Railroad Creek and the small mining town of Holden. Greenwood Mountain is quite a ways into the heart of the Glacier Peak Wilderness and it would be a very difficult peak to access if the Chiwawa River Road was not there. For the most opart the rock quality is decent as the peak is composed of very old quartz diorite and granitic rocks. There has been quite a bit of weathering though so many areas are covered in rubble, including the ledge.

Drive east from Stevens Pass or west from Leavenworth on US Highway 2 and turn north toward Lake Wenatchee at the Coles Corner Junction. After the Wenatchee River bridge go right at the Y, then drive 1.1 miles on County Road 22 and turn left on Chiwawa River forest road number 62. Drive 24 miles to near the end of the road and turn right on the Phelps Creek road. Drive to the end of this road where you will reach the trailhead at about 3,500 feet in elevation. Over half of this road is gravel and is rittled with potholes so it will likely take at least an hour or more to get to the trailhead from Highway 2.

From the Phelps Creek Trailhead, hike the trail for 4.5 miles to Spider Meadow (passing the Leroy Creek high route after 2.5 miles). The creek crossings on this trail may require wading in early season. Once at the meadow, continue along the trail across it and reach the signed Spider Gap/Upper Phelps Creek trail junction. Continue to the right and hike another half mile to a flat basin in upper Phelps Creek at 5,400 feet. The trail gets a little overgrown in a couple spots. Do not cross to the east side of the creek. Once through the trees, follow the standard route up towards Dumbell Mountain. Dumbell is the high peak on the right side of the basin. Begin by hiking up the basin a ways and locating a large gully coming down from the northeast and start up it at 5,600 feet. This gully almost always has water flowing down it; it's best to stay just to the right of the creek and scramble up the slabs. Continue up grass, talus and heather slopes heading northeast to 7,000 feet in elevation where you will notice a large rib coming down from the north. Head to the east side of this rib and enter a large snow (or talus) basin south of the summit of Dumbell Mountain. Hike up moderate snow slopes through mid-August or talus afterwards. Dumbell Mountain is the highest point seen at the head of this basin.

Aim for a 7,900 foot notch in the southeast ridge to the right of the summit. This is NOT the notch you would aim for if you were looking to summit Dumbell (which is to the west side of the peak between the false and true summits). The final 100 feet to the notch is very loose class 2+ scrambling. Once at the 7,900 foot notch, locate the ledge curving around the east side of Dumbell. Finding this ledge is key to the route to Greenwood. It is on average about a foot wide and drops very steeply down to the east. Cross the ledge carefully, which is level for the most part but covered with scree in places. About halfway across, it goes under a small overhang and a bulge makes the ledge narrower, requiring you to crawl across. Once across the ledge (which can be just about impossible to cross when snow covered), descend the snowfield 250 feet to the 7,740 foot saddle between Dumbell and Greenwood. The final 700 foot ascent up the west ridge of Greenwood is a Class 2 talus hike. The highest of the two peaks on Greenwood is the southern (first) one on the north to south summit ridge. There is a cairn and a summit register placed in 2009 by Franklin Bradshaw here. Views of Bonanza, Glacier Peak and the Fernow group are especially fantastic! 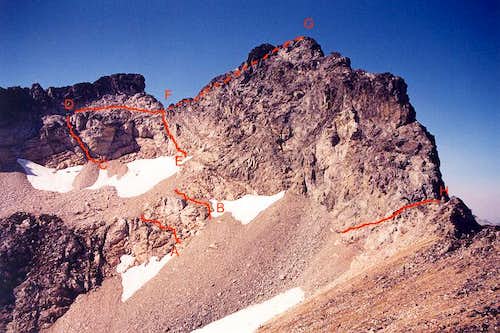 Fantastic camping is found at Phelps Meadow as well as in upper Phelps Basin. Please try and camp in designated locations at Phelps Meadow as this is a very popular place. A nice spot can also be found shortly before the trail crosses Leroy Creek. The peak lies within the Glacier Peak Wilderness therefore the "Leave no Trace" policies apply and no motorized vehicles, bikes, pets etc. are allowed. Campfires are only allowed in designated fire rings during times when fire band are not in effect. 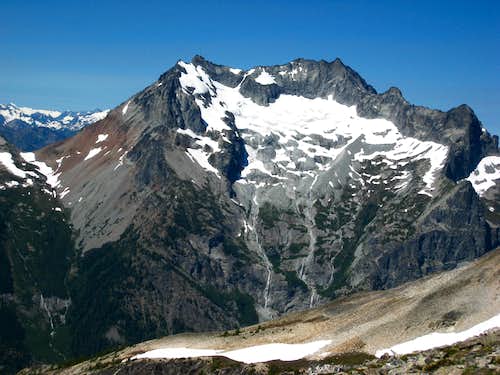 Bonanza Peak from the summit of Greenwood Mountain 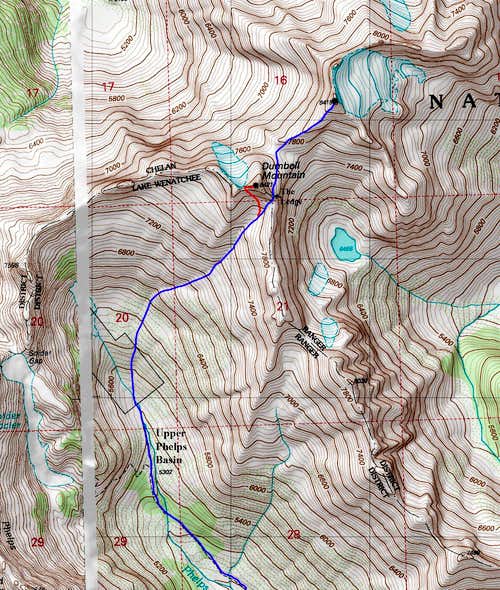