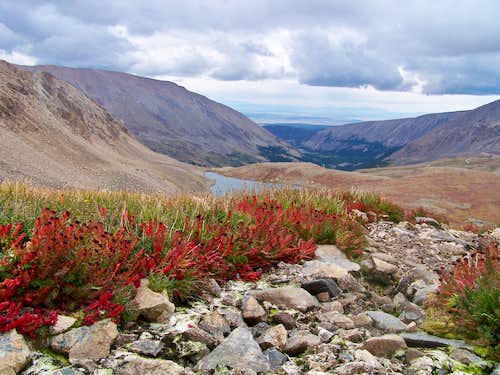 Southeast down Mosquito Creek
After hiking past mining ruins dating from the previous century, there is something especially strange about arriving at the summit of a Thirteener to find modern solar panels that, in conjunction with propane tanks, provide the juice to keep the communications repeater on the summit humming along.

Formerly known as blandly as UN 13548 or unofficially as "Repeater Peak," this peak was officially renamed in early 2013 as Kuss Peak.  Sticking with the old repeater theme, however...So, what is as repeater, anyhow? Simply put, a repeater is an electronic device that receives a signal and retransmits it at a higher level and/or higher power, or onto the other side of an obstruction, so that the signal can cover longer distances#.

A relatively gentle mountain, Kuss Peak is not going to top the list of exciting summits, but from this perch 13,548 feet above sea level, the visitor to this summit enjoys delightful views ranging from nearby neighbors in the Mosquito Gulch basin out to numerous Continental Divide summits and beyond. Several alpine lakes, including Clooney Lake and Oliver Twist Lake, call Mosquito Gulch home and the area is dotted by mining ruins and rusting extraction industry equipment spanning at least half of the 20th century, lending an interesting historical color to the basin.

*The "S" designation, for soft rank, means the summit has the potential of qualifying as a ranked peak based on the more optimistic interpolation. Interpolation takes place where summit the USGS (United States Geological Survey) does not explicitly state a saddle elevation and/or a summit elevation in the quadrangle map.
#Wikipedia: http://en.wikipedia.org/wiki/Repeater. 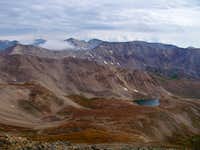 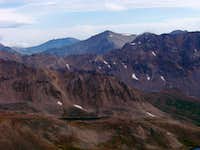 Generally, there is relatively little red tape in this part of the National Forest. The Mosquito Gulch area is a patchwork of property ownership, both public (mostly National Forest but one block of State of Colorado land) and private (primarily mining claims). In fact, the summit of Kuss Peak resides on un-signed private property. Stay far away from any of the structures and equipment on the summit and appreciate the fact that recreational use of the land in this area goes largely unchallenged. 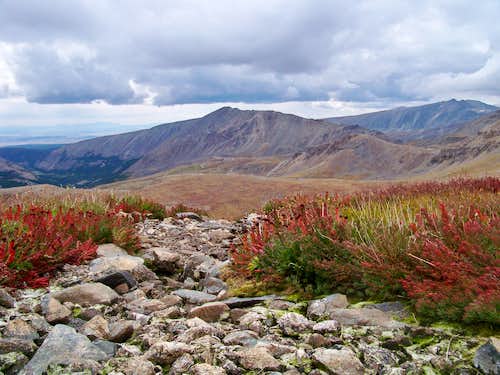 London Mountain from above Cooney Lake

Dispersed 4x4 and walk-in camping is available in the Mosquito Creek basin. This area has been heavily mined, making the safety of the water suspect for human consumption.

Fairplay & Alma Lodging
The nearby Hwy 9 communities of Fairplay and Alma provide a laid-back atmosphere and reasonable prices for lodging. A few hotel rooms and lodges exist in these small communities, but privately-owned rental cabins can allow for ample privacy with all of the comforts of home. 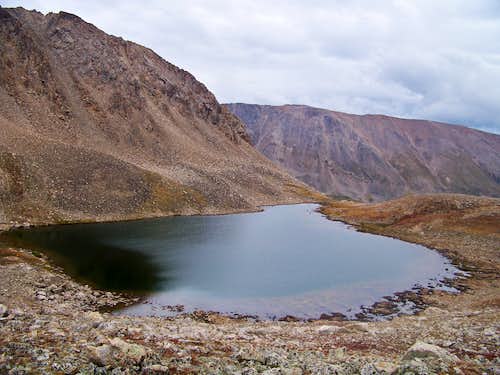 Dispersed 4x4 camping may be available along Birdseye Gulch. This area has been heavily mined, making the safety of the water suspect for human consumption.

For detailed information about lodging in the Leadville/Twin Lakes area, visit this website: Leadville Lodging 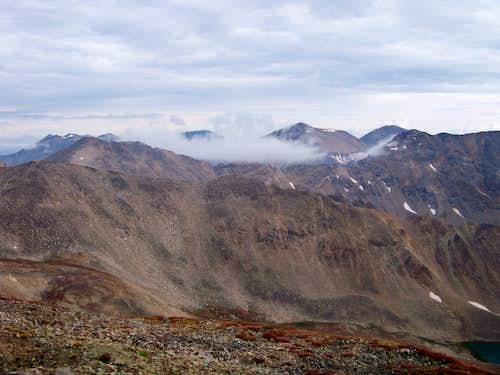 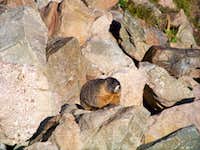 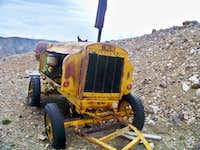 Area Mining Junk
Fall: Autumn (beginning late in “calendar summer”) is a fantastic time in the Mosquito Gulch area. The tundra plants burn crimson and fiery orange, the summer crowds have begun to disperse and the afternoon thunderstorms become less of given.

Winter & Spring: Mosquito Pass Road is likely plowed the first few miles from Hwy 9 through the tiny community of Park City. An approach from the west side would take advantage of the well-maintained Colorado Hwy 91. All routes in this area in the winter need to keep carefully in mind the generally unstable Colorado snowpack.

Summer: Summer makes for easy access (clear, typically dry roads), but the afternoon thunderstorm (that sometimes arrives in late morning!) becomes a key objective hazard. Start early in the day to be back down to treeline prior to the daily storm. This area is also quite popular with motorized vehicle recreationalist in the summer, so if you do not enjoy sharing the high country with dirt bikes and ATVs, then plan to visit Kuss Peak some other time of the year.