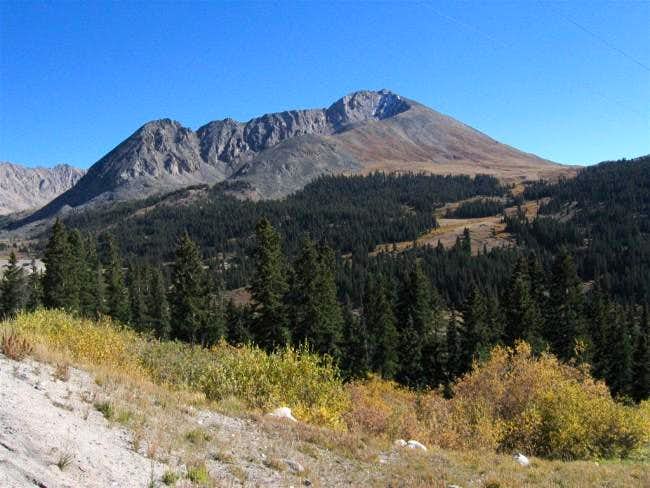 The source of the Arkansas River, a tributary of the mighty Mississippi 1000 miles to the east.

Mount Arkansas is an impressive peak that dominates the view from Freemont Pass on Route 91. The eastern slopes of Mt. Arkansas are rocky and wall-like dropping into a huge glacially carved valley that is flanked by other important peaks such as: Mt. Democrat (14148 ft), Mt. Buckskin (13865 ft) and Traver Peak (13852 ft). The western slopes are less steep but are covered with scree. When viewed from Freemont Pass, the difference between the two side of Mt. Arkansas is very apparent (Please note that from Freemont Pass, you can not see the true or the false summit. These come into view a little farther to the north).

At first glance, the easiest way to climb Arkansas may appear to be from the west but the scree seems to be tedious and might be best avoided (the west slopes can, however, act as a quick descend route).A good route is actually from the north near the first switchback south of Freemont Pass. From there, you will bushwhack your way up a beautiful meadow to reach a 11800 ft saddle. You will then go up steep grassy slopes and boulder fields to a ridgetop at 13000 ft where the "real climbing" begins. The ridgetop is narrow and exciting taking you past a false summit and a few spires to the true summit (see "Route" for more details and links to the pictures).

From the summit of Mt. Arkansas you will have great views of the peaks of the Mosquito, Sawatch, Elk and south Gore range. A good portion of Route 91 can be seen snaking around the base of the mountain.

Arkansas is an absolutely beautiful mountain with a very wide range of terrain that can offer something to everyone. It sees light traffic and you are likely to find perfect solitude on its magical slopes (except for the lower slopes where you may hear the noise of the road!).

Take I-70 to Exit 195 and follow Route 91 south to Freemont Pass (11318 ft). South of the pass, the road begins to descend. At the first switchback south of the pass, you will see two parallel roads. The first road is paved and goes to some facilities belonging to Climax Mine. The second road is a well-graded dirt road. Follow the second road less than a mile past three small switchbacks/U-turns until the end of it at what looks like a parking area (roughly 11100 ft).

I did not see any private property signs here. Much of the nearby land is privately owned by the Climax Mine.

Easiest in summer. At snow melt-off, the meadow described in this route may be very muddy. 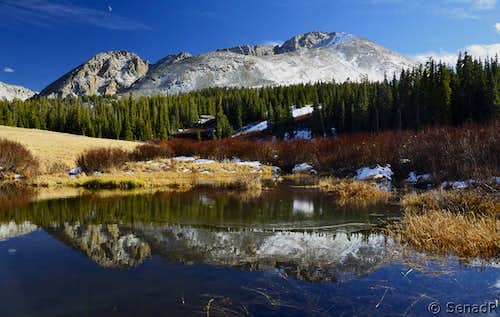 Click to see the forecast for the nearby town of Alma.

Here's an Epic video covering the south ridge of Mount Arkansas including Mosquito Peak, Teasurvault, Tweto, and finally summiting Arkansas. GREAT trip! London mine in Mosquito Gulch was very cool too as you can see here. https://youtu.be/iibJC58ZW1c