I have adopted this page with the blessing of the original author, Jon Bradford. I have done my best to update much of the tactical information and freshen the layout while maintaining the solid foundation and descriptive prose provided by Jon. I will also add a detailed description (including GPX data) of the route from the east. 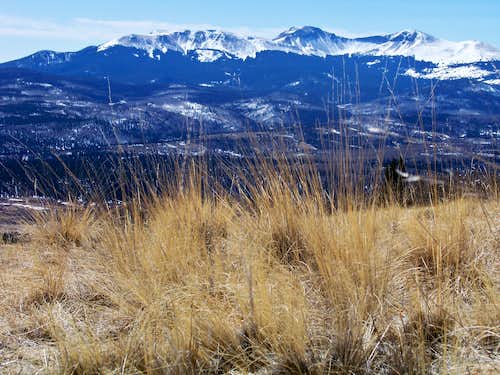 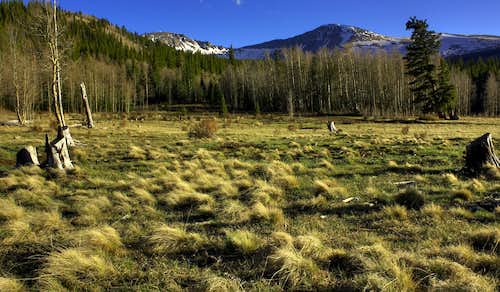 Buffalo Peaks from a meadow | pyerger

The Buffalo Peaks are the twin southern sentinels of the relaxed Mosquito Mountains. As such they are the last grand hurrah of the "Greater Park Range". This long mountain chain, although not possesed of a single official nomenclature, is geographicaly contiguous, yet split by two major drainages and a theoretical line of distinction, into several smaller, "official", ranges. The "Greater Park Range" begins in northern Colorado as the rugged Park Range proper, near Mount Zyrkel, which terminates where the Colorado River bisects the range at Gore Canyon. The cordillera continues on south after Gore Canyon as the mighty and majestic Gore Range. It suffers another break at Tenmile Canyon and continues south as the Tenmile Range. Where the Tenmile Range is cut on the perpendicular by the Continental Divide this great range takes on the name of the Mosquitos. Thus East Buffalo Peak, at 13,300 feet, and its higher counterpart, West Buffalo Peak, 13,326 feet, mark the southern terminus of the "Greater Park Range". They rise as two distictive domes visable from both South Park and Buena Vista. Traveling north on 285 I know I am nearing familiar terrain when I spot these friendly mountains. South of the Buffalo Peaks the terrain plunges below timberline and marches off into the amorphus junction of the Sawatch and Sangre de Cristos near Poncha Pass.

West Buffalo Peak is the guardian of the southern Mosquito Mountains. Its elegant domed summit with its steep east facing cliffs offers a sublime view of the spine of the Mosquitos to the north and the was of the Sawatch to the west. It is 26 feet taller then East Buffalo Peak and seperated by a 12,800 foot saddle. The traverse from East Buffalo to West Buffalo is a worthwhile endeavor. While nothing more then a class two hike the views are outstanding and the cliffs on the north and east side are always there to instill sobriety. The north ridge route on West Buffalo Peak is the easiest way up this mountain and makes an ideal descent route [when combining the two Buffalo Peaks]. - By Jon Bradford

Stamped with the USGS marker titled "Marmot Peak," West Buffalo Peak is a gentle giant from most angles, though its northeastern aspect - carved deeply by an alpine cirque - strikes a more dramatic pose. With nearly 2,000 feet of vertical prominence, along with neighboring East Buffalo Peak, this mountain serves as a bold and beautiful local landmark. 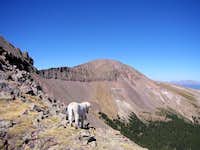 From the East
This access (not really a trailhead) is approximately 15 miles away from Fairplay. The main access point on the east side of the Buffalo Peaks is Forest Service Road 431, also known as the Buffalo Peaks Road. This road is reached by traveling south from Fairplay approximately 12.4 miles or north from the US-285 US-24 junction for 8 miles. Turn west on the signed road and drive 8 miles to a small saddle. Park here. Further on the road descends into the Rough and Tumbling Creek drainage. The Trailhead is not signed. All routes from here do follow old logging roads for some distance but bushwhacking is assured. Enjoy. 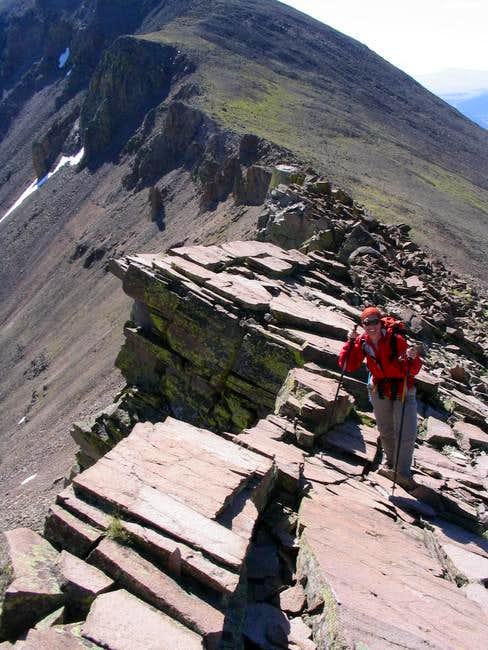 Along the connecting ridge | miztflip