Most mountain climbers in Colorado are familiar with the name "Mount Evans", many tourists as well. To most, the name refers to the fourteener Mount Evans in the front range, home of the highest paved road in the world. While that other peak may be the more famous of the two, this peak is an equally worthy outing (despite its lower stature).

Mount Evans, or Mount Evans B as it is often referred to, is one of Colorado's 300 highest peaks, known as the tri-centennials. At 13,577' above sea level it is the 204th highest peak in the state and offers fantastic views of South Park to the east and the Sawatch Range to the west. This peak is also quite accessible, especially if you have a 4WD vehicle, as 13,185' Mosquito Pass is located just to the north. Mosquito Pass is the highest open mountain pass in North America, and is considered a moderate 4WD road, one that most stock 4WD's could handle. This pass connects Mount Evans to Mosquito Peak. To the south a rough ridge connects to Dyer Mountain. 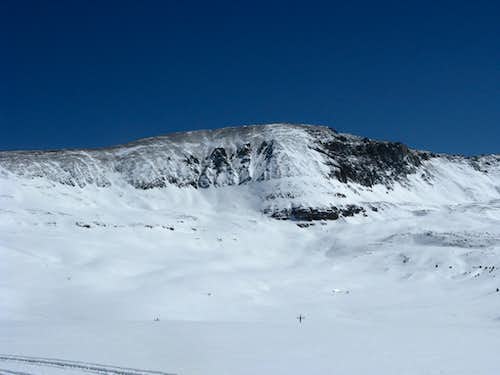 Seeing as this peak is located near a high mountain pass, there are essentially two major access points, both via the Mosquito Pass Road.

From Alma head south on Colorado 9 for one mile, or head north from Fairplay for approximately 4 1/2 miles. Turn west onto Park County 12 and follow into Mosquito Gulch. After 2 1/2 miles you will follow the right fork. After about another 2 miles the road will fork left and begin to be 4WD only above this point (appx 11,500')

The western access point for the Mosquito Pass is in downtown Leadville. 7th Street in Leadville, also known as Lake County 3 is the Mosquito Pass Road. From Harrison Avenue (US 24) head east for approximately 3 1/2 miles (winter closure) until the road gets rougher (appx 11,000'). From here those with 4WD vehicles can drive all the way to Mosquito Pass. 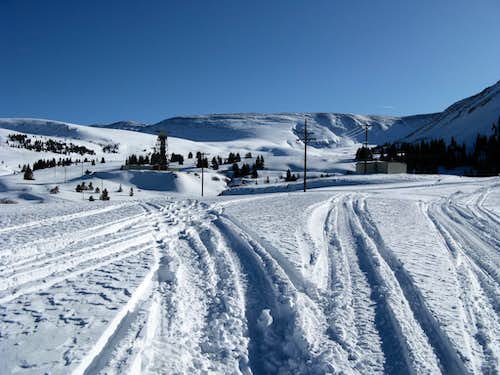 There is some private property in the area, particulary the numerous mining claims along the Mosquito Pass Road. There are also some radio towers along the summit ridge. I have never heard of private property being an issue as long as you stay on the road and the ridge you should be fine.

Due to the private property, camping along the road is not recommended. There are some campgrounds outside of Leadville that would be a short drive from the peak.

Follow the Mosquito Pass Road from either side to Mosquito Pass. If coming from the west, when snow covered, you can avoid the roads switchbacks and follow power lines to above the pass.

Depending on where you park will determine your overall distance and elevation gain. From the winter trailhead on the west side this route is 9 miles RT and around 2500' of vertical gain. 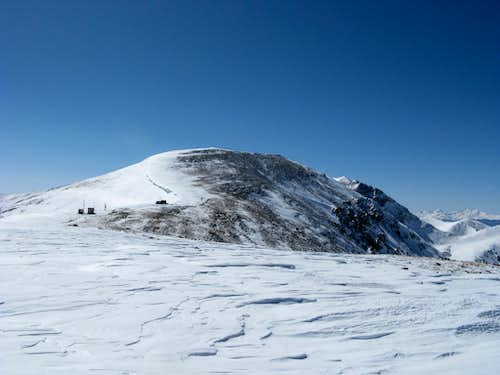 This route is primarily used when combining an ascent with Dyer Mountain. The route is described briefly from Mosquito Pass to Dyer on the Dyer Mountain page.

In Summer - Keep in mind that Colorado's high peaks typically experience daily thunderstorms. To avoid lighting, plan on an early start, even if you are driving to the pass. This is no place to be caught in an electrical storm!

In Winter - The west side is the safest as the standard route does not cross any avalanche terrain. You can get about 3 1/2 miles up the road from Leadville. The east side routes have some danger, particularly where the road crosses below the north side of London Mountain. See this link for more detailed avalanche information.

This area is also popular with snowmobilers, a benefit in someways as it really packs the approach trail down. Just be careful that they see you on blind corners or rollovers in the terrain.

In Spring and Fall - This pass is late to melt out, and can start to get snowed in early due to its high elevation. Plan on not being able to drive over the pass unless in the heart of summer.

The ease of access affords skiing/snowboarding and snowmobiling opportunities throughout the basins on either side of this peak. As always, avalanches are the biggest hazard for skiing in the area. See this link for more detailed avalanche information. There is a cornice that guards the eastern side of the summit ridge.

The west side is popular for snowmobilers, but the slopes of Evans B and neighboring Prospect Mountain A have plenty of nice moderate ski routes available. There are some steeper routes which are threatened by cornices on the south side of Prospect and also on Little Ellen Hill and West Dyer Mountain. These routes are the most likely to slide and should only be skiied under the right conditions. 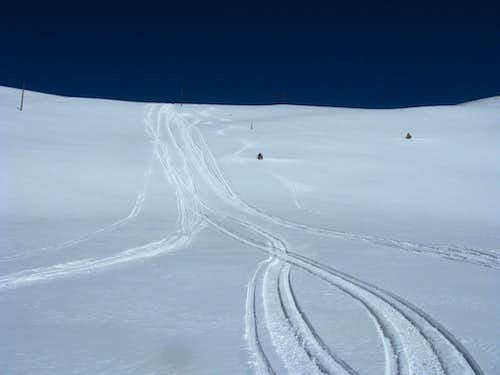 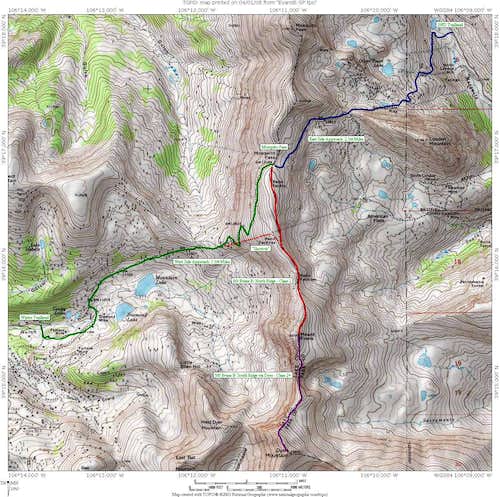