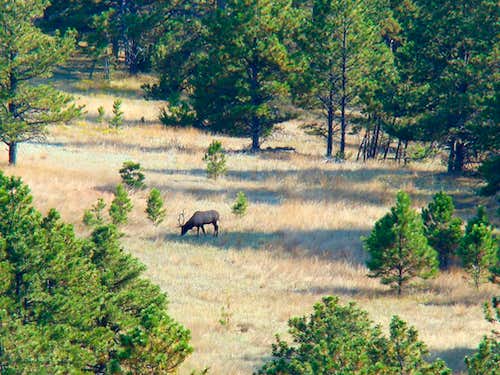 An elk grazes on the eastern slope of Matias Peak

One of the most interesting peaks in the Black Hills is also one of the southernmost. Matias Peak is rarely visited, yet its slopes are loaded with history. The peak is the highpoint on a divide between Red Canyon, to the west, and Chilson Canyon, to the east. About 1 mile east-southeast of the summit is the old Fossil Cycad National Monument, while the western slope of the mountain descends into Red Canyon. Red Canyon, along with Craven Canyon further west, is noted for Native American pictographs and petroglyphs. However, many of the locations are not widely known. An old Native American teepee (or tipi) ring is still in existence on the small flat summit area of Matias Peak. 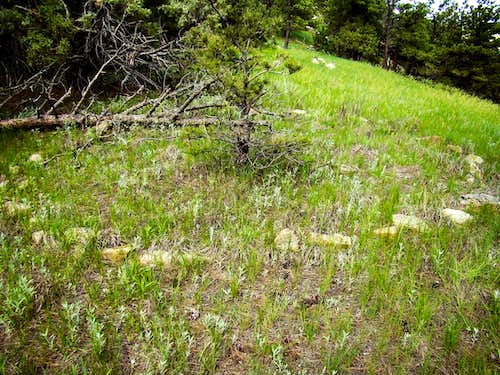 An ancient teepee ring at the Matias Peak summit area

This area of the Black Hills was fought over by various native tribes, including the Sioux, the Cheyenne, and the Crow. It is not entirely clear which of the tribes were responsible for the pictographs and petroglyphs, or for that matter the teepee rings and other artifacts occasionally discovered in the area. Some remnants of pictographs exist on the smooth portions of the canyon walls on the west side of Matias Peak. According to Lists of John, Matias Peak has 610 feet of prominence. Topo maps show the summit is approximately 700 to 800 feet above the upper floor of Red Canyon, at the western base of Matias Peak, and approximately 700 feet above the floor of Chilson Canyon. Red Canyon Creek empties into the Cheyenne River, about 10 miles south. There are a few forest service roads through the public lands in this area, but many are not well-maintained or even marked. The thick underbrush and rugged nature of the numerous canyons and branches in this part of the Black Hills makes exploration an arduous task. Fortunately, the road that leads to the Matias Peak summit area from Highway 18 is still passible, allowing hikers an easy scramble up the grassy slopes for the last 150 feet of elevation gain. 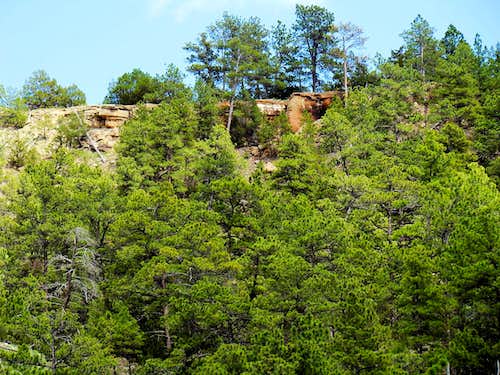 Red Canyon rim on the western slope of Matias Peak

The pictographs and petroglyphs in Craven Canyon, a few miles west, have been more well-known to the public in prior years. However, area hikers and ranchers have made more recent discoveries in Red Canyon and its branches. The types of paints used in the pictographs are generally dark colors, predominantly reddish-brown to almost black. Some white or light-colored paints are found in a few pictographs. Unfortunately, pictographs are generally less durable than the inscribed petroglyphs, so what remains is sometimes quite weathered and incomplete. Vandals damaged some of the Craven Canyon native artwork several years ago, which was followed by major forest fires in the area (presumed to have been ignited by dry lightning). Since then, the national forest service has closed off vehicle traffic to the Craven Canyon site as a protective measure. However, the national forest service is limited on what they can restrict, since it is public land. The only locations that I have observed that may have pictographs are hundreds of feet up some difficult-to-reach rock walls on the western side of Matias Peak. I would speculate that the native artists may have climbed down from canyon rims to their chosen sites for their artwork. Up until 2011, there was a business near Edgemont, South Dakota, Rock and Pine Adventures, that used to offer guided tours to sites with petroglyphs, pictographs and teepee rings. That service is no longer available, so explorers now have to find sites on their own. 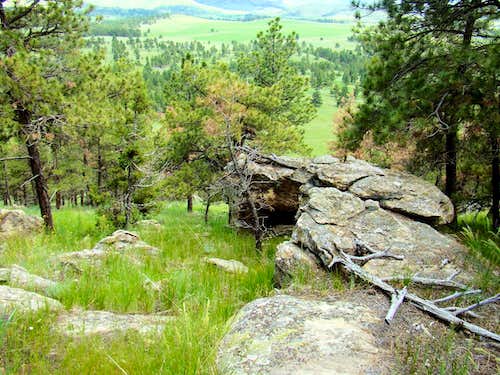 This national monument, only 320 acres in size, was an ill-fated attempt to procure and preserve rare fossil cycads. Located less than one mile southeast of the Matias Peak summit, the monument was established in 1922. At that time the monument contained one of the world’s greatest concentrations of fossil cycads. The site was originally discovered in 1892 in the Dakota Sandstone formation. Following the discovery, numerous scientists journeyed there to study the fossils, leading to the formal request for a national monument designation. Fossil cycads are the fossilized remains of ancient cycads. Cycads resemble ferns, though they are not actually ferns. These cycads were tree-sized. Vandals and thieves entered the site before the national monument paperwork was even completed, and stripped the site bare. Scientists hoped more fossil cycads could be excavated, but their attempts were met with almost no success. The national monument was closed in 1957. Sadly, the problems did not end then. Even to this day, area ranchers complain of trespassers still looking for fossil cycads on their land. No doubt the examples of the Craven Canyon and Fossil Cycad vandalism described above, plus the on-going problems of “good old boys” shooting signs, building careless campfires and throwing beer bottles and cans everywhere, have all fueled a widespread reluctance on the part of area ranchers to allow anyone, including hikers and climbers, to access private land summits and canyons. The difficulty in obtaining permission to climb the Fall River County highpoint, Parker Peak, is a good example of the result of these problems. 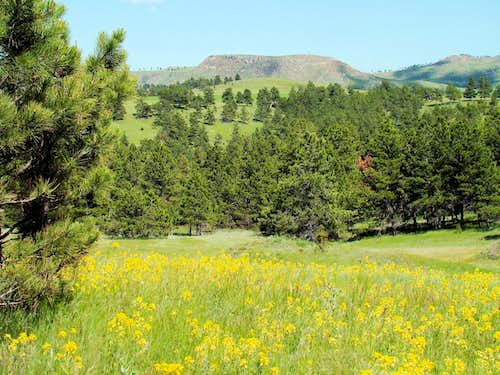 To get to the best hiking route for Matias Peak, drive 16 miles southwest from Hot Springs on Highway 18. Since odometers vary, a more precise reference point would be .9 mile past the junction of Highway 18 and County Road 18S (old Highway 18). If you are driving north from Edgemont on Highway 18, the distance to this unmarked road will be approximately 9 miles. The pavement widens there and you will see on the right (north side) a 2-track road, with an unmarked gate. As of the time this page was created, there were no restrictions posted on that gate. Though the western half of Matias Peak is on national forest land, this road does not show up on their vehicle use maps. This is probably because the road turns east and goes out to the Johnson Ranch. However, once you see the road, you will quickly realize it sees little use. Open the gate and proceed through, making sure you securely latch the gate again.

The Normal Route - Drive or hike up the road 1.2 miles. At that point, the road briefly parallels the sharper rise of the southeast slope of the peak, before it veers to the east and on in to the Johnson Ranch. There is about 150 elevation gain from the road and it’s up to you where you choose to ascend. Directly to the west of the summit is the east rim of Red Canyon. The summit area is kind of long, narrow and flat. The true high point appears to be closer to the north end, while the teepee ring is toward the south end. The views there are somewhat limited because of all the trees. But, there is a good view east toward Parker Peak, the Fall River County highpoint. 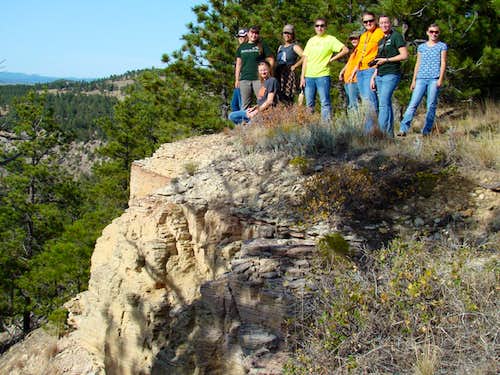 A Very Difficult Alternative - Normally, I do not discourage bushwhacking. This area is different, though (yeah, I know I’m getting old). But I know how some of my hiking friends think. You all know that hiking philosophy that says it has not been a “real” hike or climb unless one arrives home cut, bruised, exhausted or worse. So, for anyone who is a glutton for punishment, and is simply not satisfied with the easy route and all those great photo ops, they have the option of trying their hand at bushwhacking up the western or northwestern slopes to the summit, from the floor of Red Canyon (bushwhacking from the north or east is not really an option). Studying every good map available is necessary. The Black Hills National Forest Motor Vehicle Use Map (free) will be necessary to locate Forest Service Road 379. Road 379 intersects with Highway 18, not far south of the road to Matias Peak. It is the only access corridor from the Matias Peak area to the floor of the canyon. The only noticeable sign there is the large yellow “burn area” sign near the fence. After crossing a normally-dry creek, there is a meadow, where the road branches. The north (right) branch is the correct turn. After hiking or 4-wheeling about 2 miles from the highway, there is another dry creek. This begins the area one could theoretically bushwhack from. Judging from the almost sheer canyon walls near the rim along much of the western and northwestern sides of Matias Peak, one will probably not find many possibilities less than very difficult. Compounding attempts from anywhere in this area, is thick underbrush interlaced with boulders and loose rock on the steep terrain. The rise from Road 379 to the summit would be in the 600-800 feet range. There is also a population of rattlesnakes in the canyon, and they do not feed on ticks. So there are plenty of ticks looking for victims. And if I have not yet discouraged most attempts from this area, everyone should be aware of the resident mountain lion population. Considering all risks factors combined, bushwhacking from Red Canyon is not an idea I could endorse. With all that said, if anyone still wants to try to bushwhack from this side and they not only survive, but are also successful, attaching both a trip report and a route page would be both helpful and very interesting For all others whom I may have discouraged from such a risky bushwhacking venture, please do not think that a photo-taking trip in Red Canyon is also a bad idea. When daytime shadows are getting long, and the sun lights up those red canyon walls, photo opportunities abound. Sticking to Red Canyon Road, or even Road 379 should give all visitors plenty of great scenery to enjoy.

This public land can be accessed year around. Deep snow could interfere with winter access, but most of the rest of the time there should be no problem. To check the latest weather forecast for the area, click here: Matias Peak - Edgemont Area Weather 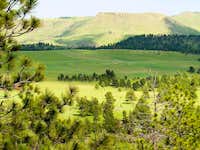 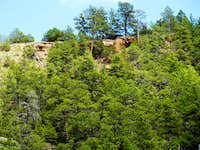 The western portion of Matias Peak is on national forest land. The eastern slope is on private land – the Johnson Ranch. As long as you respect the private land owner’s rights, you should not have any problems. How long the national forest service will allow public access by vehicle on this road remains to be seen. Be sure to check for new notices on the gate. 1.2 miles is not that far to hike, so please do not count on driving as close as possible, if that should be your plan. Please also remember that if you find any artifacts or fossils, it is illegal to remove these. 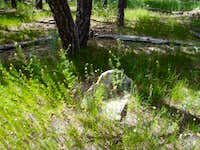 You can camp almost anywhere in the Black Hills National Forest, except where posted. If you are unsure, you can always check with the national forest service office in Hot Springs. Their phone number is (605) 745-4107. For other camping options in the area, check out the resources below: