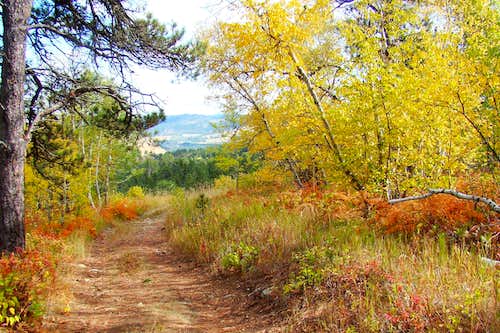 One of the most interesting peaks to summit in the northern Black Hills is Mount Theodore Roosevelt. The mountain is situated just north of Deadwood, with the summit 1080 feet higher than the downtown area.  According to Lists of John, Mount Roosevelt ranks as number 89 among Black Hills summits, with a prominence of 360 feet.  While not a difficult climb, hikers will find not only great views, but also get to see the historic stone tower at the summit. The stone tower provides great views of Terry Peak and Spearfish Peak to the west, the Bearlodge Mountains to the northwest, Polo Peak to the north, Bear Butte to the east and Custer Peak to the south. 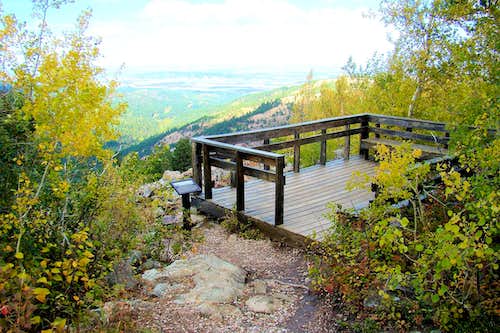 Despite its close proximity to the resort towns of Deadwood and Lead, wildlife is in abundance with deer, elk, pronghorn antelope, and a large variety of small animals and birds. As the mountain lion population continues to grow in the Black Hills, they are also seen occasionally in the area. There is a large aspen grove on the southern slopes leading down to Deadwood and there is a small picnic area and vault toilets at the trailhead.

The Friendship Tower was given over to the National Forest Service, who now manages care and upkeep of the structure as well as the forest in the region around Mount Theodore Roosevelt.

Friendship Tower was built in 1919 as a tribute to Theodore Roosevelt, by Seth Bullock, a well-known figure in the history of the Black Hills. Bullock was a rancher, sheriff, and US Marshall, and was a close friend of President Theodore Roosevelt. Bullock completed the tower after Roosevelt died earlier in the year. Strangely, Bullock died later that same year. Roosevelt, a popular figure in the Black Hills, was later honored as one of the four faces on Mount Rushmore.

In years past, the summit was cleared of trees. But, re-growth over the last few decades has obscured some of the view from the summit. One can still get clear views of various Black Hills peaks. However, the lower view to the southwest is scarred by the remains of the old Homestake Gold Mine.

Getting There & Route to Summit

Access from downtown Deadwood is easy. Start at the intersection of Main and Denver Streets, and then go up Denver Street. Denver Street will soon turn into Pine Crest Lane, which is also a forest road, BHNF133. Normally, there is not much traffic, so you may have the road all to yourself if you want to hike up to the trailhead from Deadwood. Around 3 miles up, you will come to a picnic area and parking lot. There you will find the Mount Theodore Roosevelt trailhead.

If you are traveling in from Interstate 90, you can access BHNF133 from Highway85. You can park at that intersection and hike the forest road about 3 miles until you come to the picnic area and Mount Roosevelt trailhead.

The loop trail route to the summit is well-maintained. At around a mile in total length, and with a gentle grade, it makes access to the summit possible for almost everyone. There is about 150 feet in rise from the trailhead to the summit. The trail winds through aspen groves and pine forest, and past small boulder fields. Part of the view south from the boulder field is quite scenic.  Colorful ground foliage adds to the beauty of an autumn hike through the golden aspens. Besides the Friendship Tower, there is also an observation deck above a small boulder field to the northwest.  That overlook deck is accessible by a short pathway just off the loop trail.

Since this is all public land, there is no red tape, outside of observing campfire safety.

This area is open year-around. The roads to the trailhead are not always promptly plowed, but they are maintained. Summer lightning and winter blizzards will probably be your major deterrents. For the latest weather information for this area, click here:

The Deadwood area has many hotels, resorts and campgrounds: 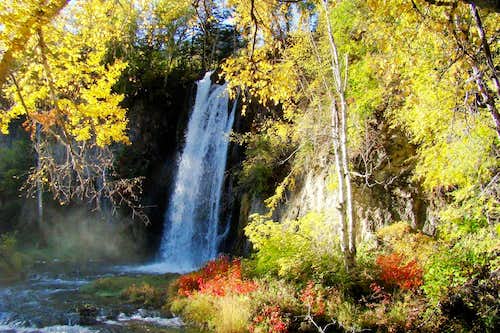