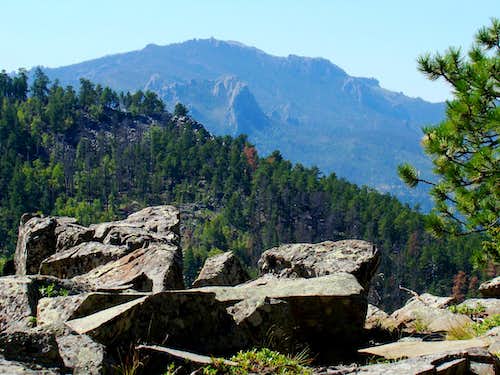 If you have some time to spend in the Black Hills, one of the summits you won’t want to miss is Mount Warner, which is located about 6 miles east of Hill City. On most maps, the summit only appears as “5889”. However, the guidebook “Exploring the Black Hills & Badlands” by Hiram Rogers, refers to the summit as Mount Warner, which is also shown in the book’s maps. Though only 5,889 feet high, according to Lists of John, Mount Warner is # 5 in the Black Hills for rise, with 949 feet of prominence. The summit is accessed as one of the highpoints on the Centennial Trail. Because foot traffic is generally light on the trail, you may find you have the trail all to yourself most of the time. The forest is generally rather thick in the area, so even on a warm sunny day, you will find quite a bit of shade along the way. Like most areas of the Black Hills, there are varying degrees of pine beetle kill along the way. Nearing the summit from the south, there is quite a bit of deadfall – probably from a combination of beetle kill and Winter Storm Atlas in 2013. While ponderosa pine is the most common tree in the area, you will also find aspen, oak, birch, and ash trees scattered throughout the forest. The forest is managed by the Black Hills National Forest Service. Nearby Samelias Peak has some sizable aspen groves on its slopes, adding some great color in the fall. Though there are many trees at the summit, the numerous rock outcroppings still give visitors many photo opportunities. Harney Peak, Elkhorn Mountain and Samelias Peak are easily seen from Mount Warner. Small game and deer are in abundance in the area. Seen less often, but still residing in the area are elk, mountain lions, mountain goats, bighorn sheep, and eagles. 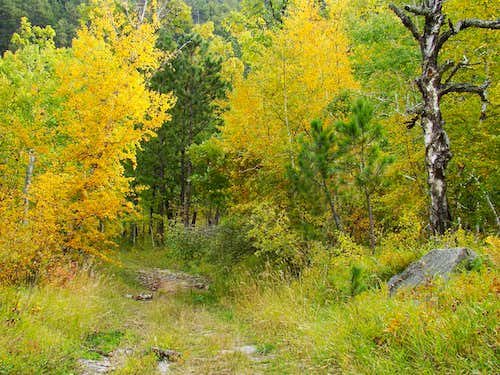 Fall Colors on The Centennial Trail

At 111 miles, the Centennial Trail is the longest trail in the Black Hills, running from Bear Butte near Sturgis, to Wind Cave National Park, north of Hot Springs. The trail uses much of the old 55-mile long Silver Arrow Trail that was developed by area Boy Scouts. Though not meticulously maintained, hikers generally find the Centennial Trail to be well-marked with the “Trail 89” signs spaced much closer than many other Black Hills trails’ signage. The choice of “89” as the trail number coincides with the year of South Dakota statehood (1889). The Centennial Trail passes through or nearby many of the Black Hills most well-known attractions, like Mt. Rushmore, Bear Butte, Black Elk Peak, Wind Cave National Park, Custer State Park and the Black Elk Wilderness. Wildlife viewing is good because most of the trail does not get traffic levels like Mt. Rushmore or Harney Peak. So with the variety of terrain, forests, streams, meadows and wildlife, photo opportunities are abundant. Trailheads and campsites along the 111-mile trail are numerous. 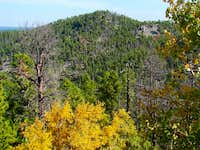 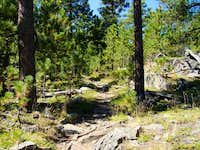 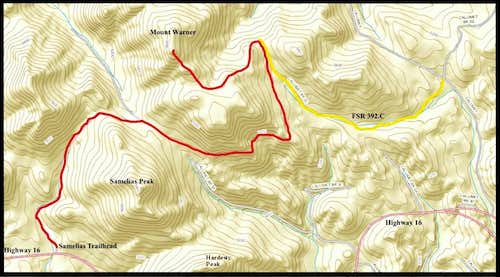 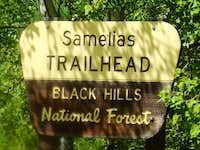 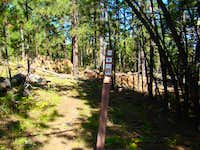 All the trail options center on the Centennial Trail. While one can hike the 3.7 miles from the Calumet Trailhead at Sheridan Lake to the summit, reaching that trailhead is often an annoying process with all the Sheridan Lake fee areas and traffic. So I will skip that route and concentrate on two better options. Samelias Trailhead Route The Samelias Peak Trailhead is not so-named because there is a trail to the summit of Samelias Peak, but rather that the trailhead is right next to the peak. The Centennial Trail (red on the map) wraps around the west, north, and northeast sides of Samelias Peak before starting a sinuous route to the summit of Mount Warner. The trail uses a little bit of old 2-track forest roads, but is mostly a narrow single-track trail. It is approximately 3.3 miles from the trailhead to the summit, taking you almost 800 feet up from your starting altitude. There are some areas of deadfall to negotiate, but most of the trail is pretty good. I enjoyed the brilliant yellow aspens on Samelias Peak when I hiked there in late September. 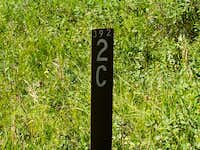 Calumet Road/FSR 392.2C/Centennial Route If you would like a shorter hiking route to the summit, you can turn off Highway 16 at Calumet Road and go north .7 mile to FSR 392.2C (yellow route on the map). Turn left and park anywhere your vehicle will not obstruct traffic. Hike up the road for .4 mile, to where you will come to a closed gate. After this gate, it is quite unlikely you will encounter any vehicle traffic (though the day I took this route, there were pine beetle scientists on the road). When you have hiked another.8 mile, the road will end at the top of a saddle and you will have noticed that the road is headed in a more northerly direction here. About 75 feet west of the road is the Centennial Trail, which abruptly turns west at about the same area FSR 392.2C ends. Follow the Centennial Trail west for approximately .8 mile and you should be at the summit of Mount Warner. This out-and-back should only be about 4 miles total. 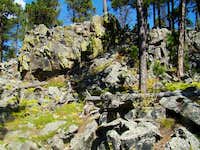 Spring, summer, and fall are all good times to hike. Winter hikes will depend on snow depth. Of course, summer lightning and winter blizzards will likely mean your hike will have to be re-scheduled. For more on the latest weather in the Mount Warner area, click on this link:

There are no fees or permits needed. To avoid trouble, one only has to comply with Black Hills National Forest Regulations. Camping is allowed in the forest, as per regulations. They are particularly strict about campfires, so be sure you are in compliance. Please remember to pack out what you bring in. 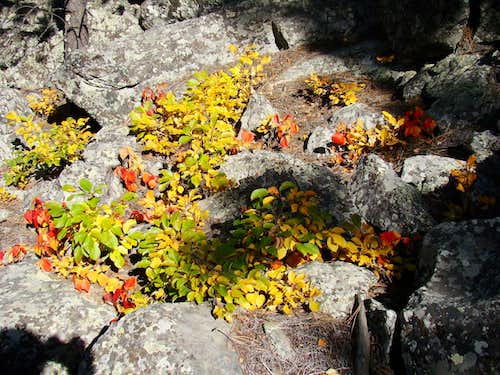 The national forest service has campgrounds in the area, plus the nearby towns of Hill City and Keystone have chambers of commerce that maintain up-to-date listings of campgrounds and lodging. To learn more, click on any of the links below: