Despite the fact that Crooks Tower is one of the highest and most remote summits in the Black Hills, the peak sees more visitors than one might think. In the summer, ATV riders, horseback riders and hikers often visit this fourth-ranked summit. Autumn is the time of year that big-game hunters are seen there. Over the winter, the summit is occasionally visited by snowmobilers, since Black Hills Snowmobile Trail # 6 is just west of Crooks Tower. Visitors to the summit enjoy the giant boulder that acts as the summit block, offering views mostly to the north, east and southeast. 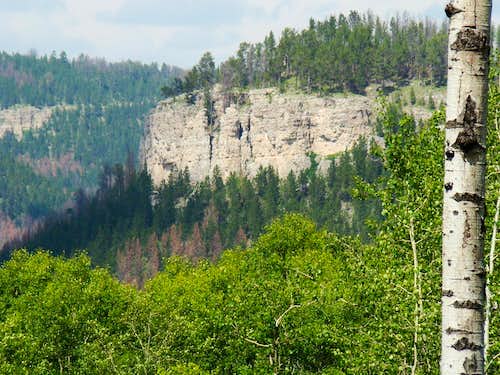 Rhoades Canyon lies on the east side of Crooks Tower

Crooks Tower was named for Civil War General George Crook. This area of the Black Hills is normally pretty quiet. However, a very rare touch-down of a tornado did occur on Crooks Tower in July, 1968. Lists of John gives Crooks Tower 527 feet of prominence, and notes that the summit is the high point of Lawrence County. The mountain is covered with pine forests, though aspen and spruce are also seen there. The Black Hills National Forest Mystic office manages this area of the Black Hills. Wildlife is in abundance, with this being a favorite habitat for deer and elk. There are several large meadows on the mountain, particularly just to the east-southeast of the summit block. This area of the Black Hills is part of the Limestone Plateau, so there are numerous outcroppings of rock throughout the region. Rhoades Fork Canyon lies to the east of Crooks Tower and boasts some impressive limestone walls. The only clearly identifiable peaks from the summit of Crooks Tower are Black Elk Peak and Odakota Mountain. Visitors will need a good pair of binoculars to see much detail on those summits, due to the distance to those peaks. There is an amateur video of Crooks Tower posted on YouTube at this link:

Black Hills newspapers reported an interesting incident that happed on Crooks Tower in November of 1941. Elk hunters found a live buck deer and a dead buck deer with their massive antlers locked up. The local game warden was called to handle the matter, though it took the hunters quite a bit of time to get to a phone. About 30 minutes were spent sawing antlers before the living buck could be freed. The warden said the tracks indicated the young buck had challenged the old buck over a female deer which led to the battle. 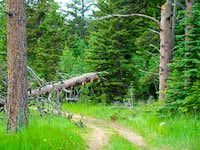 Most of the visitors to Crooks Tower access the summit from Road 189, by way of Road 231, also called South Rapid Creek Road. From the tiny community of Rochford, it is about 16 miles west on 231 to the junction with Road 189. It is then about 2.5 miles south to the Road 189.4A turnoff to Crooks Tower. For those traveling to Crooks Tower from Rapid City and other points east, Deerfield Road from Hill City is the normal route of choice. From Deerfield Reservoir, Road 17 (South Rochford Road) runs north to Rochford and Road 231. For those traveling to Crooks Tower from Spearfish and other points north, Road 17 (also known as Rochford Road and also as Road 205) runs about 15 miles from Highway 85 to Rochford and Road 231. For those who opt for the long hiking route up Crooks Tower using old forest road 631, the distance from Rochford to the 631 turnoff is around 11 miles. 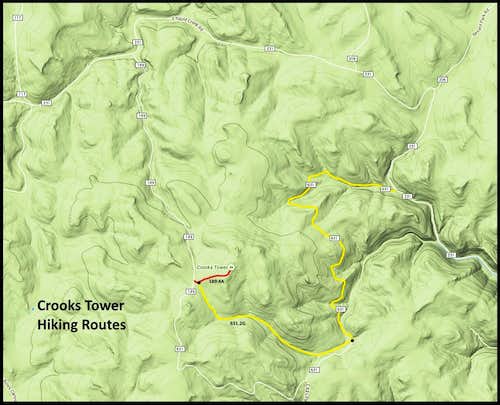 This map shows both routes described below. Normal Route: The simplest, shortest and easiest route to the summit is from Road 189. At the junction of 189 with 189.4A, hike .5 mile to the summit block. There is only about 150 feet of elevation gain. The road surface is rough for vehicles, but good for hiking. Occasionally, a fallen tree will block the road, but poses no problems for hikers. Optional Long Route: The other route is much longer and certainly more difficult. However, since it uses old forest roads, it is pretty well-defined. This route begins at the junction of South Rapid Creek Road (Road 231) and Road 631. Since this road is not used often by hikers, there is no official parking here. However, so long as you do not obstruct either road with your vehicle, you can park wherever you want. It is about 4 miles worth of hiking up Road 631 to get to the turnoff for Road 631.2C. Follow that west for about 2 miles, and you will find yourself next to the junction of Road 189 and Road 189.4A, which is then just .5 mile to the summit. There is about 800 feet of relative elevation gain on this longer route. While this route is kind of a hazard for any vehicles larger than ATV’s and small 4WD’s, it’s not bad to hike on. The abundance of trees, wildlife and other scenery make this an enjoyable route. 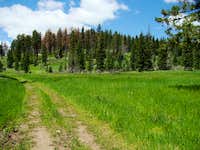 There are no specific prohibitions for Crooks Tower. However, there are the Black Hills National Forest Regulations. Forest fires are always a major concern, so improper or illegal campfires can often bring an unpleasant visit from the nearest ranger. Illegal fireworks will also result in problems. All the public land in the area is open to hunting in season. Big game seasons in the fall and early winter will be your biggest concern. If you decide to hike there during one of those seasons, please be sure to wear a generous amount of orange. 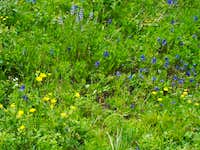 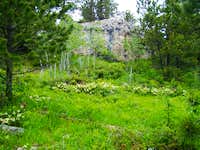 Like all summits in the Black Hills, winter blizzards and deep snow, as well as summer lightning will discourage access. Otherwise, you can access the summit most of the rest of the year. For the latest weather conditions and forecast, click on this link: Crooks Tower – Rochford Area Weather Forecast & Conditions

Hunting seasons will also be a concern, since this area is open to all types of hunting. Click here to learn more about the South Dakota Hunting Seasons. 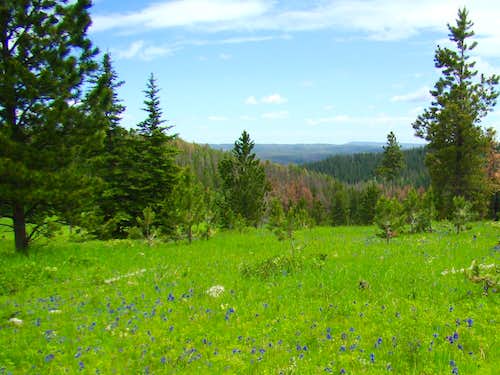 Since this is the Black Hills National Forest, you can camp anywhere on the public land. There is some private property in the area, so please watch for those private property postings. The greatest concentration of campgrounds in the area is at nearby Deerfield Reservoir. However, the Black Fox Campground is the closest site, about ten miles away. For more information, check out the following links: