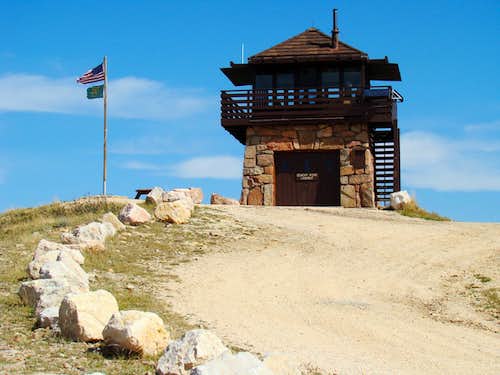 At 6,647 feet, Cement Ridge is the highest peak in Wyoming’s portion of the Black Hills. Lists of John places the prominence at 547 feet, providing clear summit views of Crow Peak, Inyan Kara Mountain, Spearfish Peak, Terry Peak, Old Baldy Mountain, and Custer Peak, as well as views of Rattlesnake Canyon, Wagonwheel Canyon, and Wyoming's Grand Canyon. The clearing for the old gold-mining town of Tinton, South Dakota can be seen, located just a few miles to the east.

Cement Ridge is a long mountain ridge, with the old fire lookout at the northern end of the ridge. The actual highpoint is immediately south of the junction of forest service roads 850 and 222.1E. The highpoint is covered in thick forest, making an off-trail hike up to the summit an arduous task. Those who hike to the summit area must sometimes share the road with forest service vehicles, fire department vehicles. ATV’s or 4-wheel drives. The forest here is managed by the Black Hills National Forest Service.

Geologists have found igneous rock and limestone in abundance here. The summit is porphyry, with basal quartzites and shales elsewhere on the mountain. While the fire lookout area is devoid of trees, not far away are numerous ponderosa pines. Aspens are in abundance not far down the slopes, as well as some paper birch and spruce. This part of the Black Hills has abundant elk herds, which are often heard bugling in the autumn. 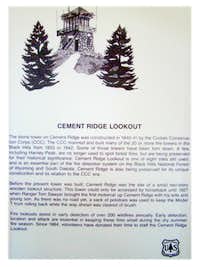 The area around Cement Ridge is rich in Minnekahta limestone, used in the manufacture of cement. This is probably relevant to how the peak was named. A log cabin was constructed on the summit in 1912, with a 2-story wooden tower added nearby in 1921. The summit was not vehicle accessible until 1927, when ranger Tom Sawyer brought his family up to the summit in a Model T Ford. Most of the broken trees seen on the peak were the result of a freak tornado during the early 1990s. The current lookout tower was constructed by the Civilian Conservation Corps from 1940-1941. In 1993, the Cement Ridge Fire Tower was listed in the National Historic Lookout Register.

The lookout tower is still used for fire detection and uses an Osborne Fire Finder to pinpoint forest fires. Visitors to the lookout sometimes are able to see the rangers at work, as well as ask some questions. Numerous signs at the summit provide visitors with an education about Cement Ridge and identify nearby peaks. 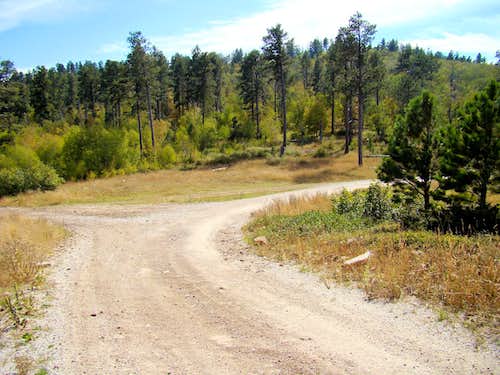 Cement Ridge is located in Crook County, Wyoming, one mile west of the South Dakota border in the Bearlodge Ranger District of the Black Hills National Forest. A good map of the area is a wise investment, as navigating without one can be risky. The mountain is on the list of Wyoming's 100 most remote peaks. It is quite an area to get lost in since the roads are minimally marked.

Perhaps the most scenic route to get to Cement Ridge is from Savoy, in Spearfish Canyon. Savoy is about 13 miles south of Spearfish, South Dakota through the very scenic Spearfish Canyon on Highway 14A. A lodge and visitors center is located at Savoy, along with a one-mile trail up to Roughlock Falls, and a short trail to 50-foot high Spearfish Falls.

There is also a short, but very steep trail rising 1,000 feet to Spearfish Canyon’s Buzzard Roost, which offers an incredible overview of the canyon at its best. The whole area could merit a trip by itself, but is certainly well worth a stopover if you have the time. 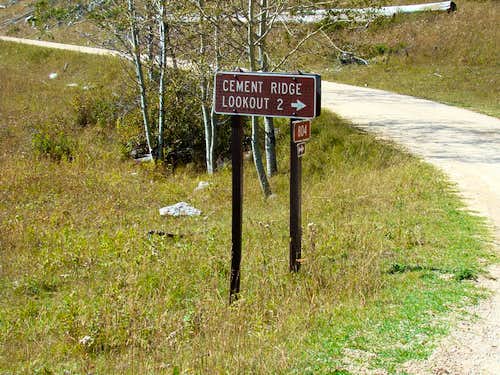 From Savoy, travel west on the Roughlock Falls Road (FSR 222) to the junction with FSR 134, where you will turn left and drive a very short distance to FSR 105. At the junction with FSR 105, go west until you come to FSR 804. On FSR 804, go north until you come to FSR 850, where you will see a sign for the route to the summit. The hike to the summit and back is about 2 miles.

The most direct route from Spearfish is by taking Tinton Road, (FSR 134) south to the junction with FSR 105.

Be aware that vehicles can and do use the road to reach the summit, and you may also encounter mountain bikers or horseback riders. 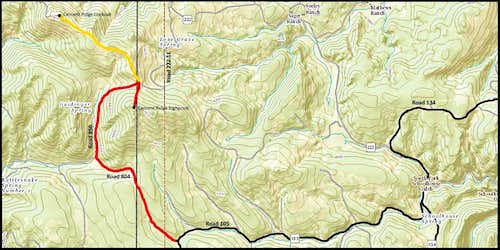 Because of occasional 4-wheel drive and ATV traffic on the forest service roads, some people prefer not to hike to the summit or the lookout. But unless one wants to bushwhack to the summit from some chosen point, the best hiking access that will likely see the least traffic, would be from FSR 222 where it intersects with FSR 222.1E (Cement Ridge Road) near the Wyoming border. FSR 222.1E will present a 1.5 mile hike from 6,245 feet to the intersection of FSR 222.1E and FSR 850.1. From there, the climber can decide if they want to hike the additional mile to the lookout, or bushwhack approximately .3 mile to the true summit or do both. 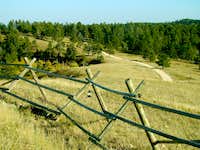 FSR 850.1 will give you access to both the highpoint and the fire lookout tower area. If you hike up from the junction of FSR 804 & FSR 850.1, it is close to one mile to the junction with Cement Ridge Road (FSR 222.1E in South Dakota). The true highpoint for Cement Ridge is almost due south up the slope from that road junction. That would be around 200 feet gain in altitude.

Please be aware that the roads here are closed during the winter snow season and are used instead for snowmobile trails, as part of the Black Hills Snowmobile Trail System. A vault toilet is provided for visitors to the fire lookout.

Black Hills Forest Service offices offer a free Motor Vehicle Use Map for the Bearlodge and Northern Hills Ranger District. They update these maps each year to show what forest roads are open and to which categories of use they are open for. The National Forest Service offices also sell their own high-quality maps for the Black Hills National Forest. 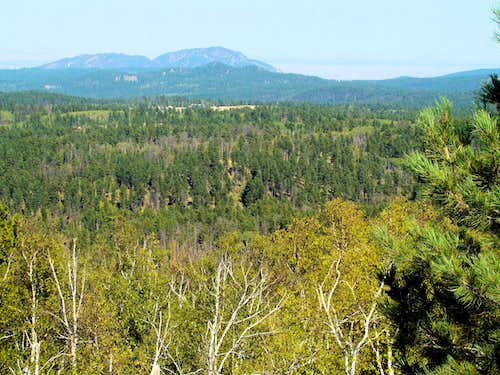 View of Crow Peak from the Cement Ridge Lookout

Please be aware of weather conditions before you set out. Summer temperatures can reach 90 to 100 degrees, and late afternoon thunderstorms can produce some dangerous lightning. Tornadoes are very rare, but obviously they can strike even at that altitude. Winter snows in the northern hills can get rather deep at the higher altitudes and the roads are not plowed in the winter. Only snowmobiles can access the summit during the times of the deepest snows.

The most beautiful time of the year to visit is generally from mid-September to mid-October, when all the autumn colors are peaking. There are large stands of aspen in various locations in the area. Fall deer and elk hunting seasons will provide ample reasons to exercise caution when doing any off-road hiking in the area.

For the latest area weather conditions and forecast, click here:

There are no permits or passes needed. Illegal campfires are probably the greatest concern of forest service officials. 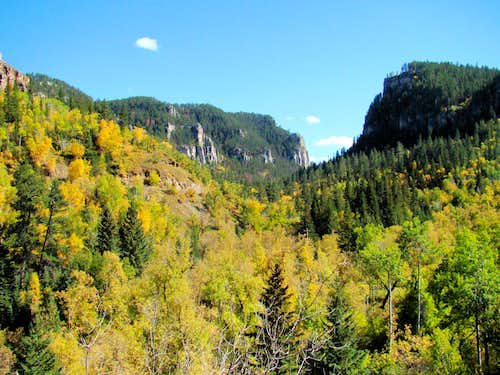 Nearby Spearfish Canyon has many camping opportunities