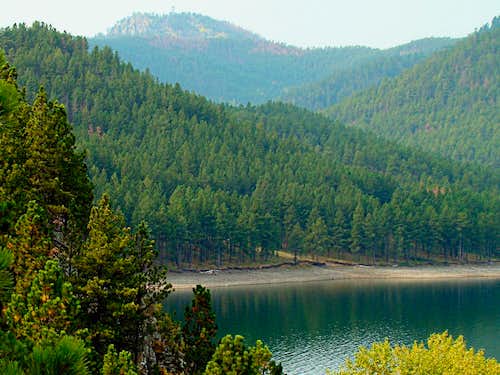 If you ask Black Hills residents where Scruton Mountain is, many will tell you they have never heard of it. But, if you ask the same people where the Seth Bullock Lookout is, most can tell you it is just south of Pactola Lake, near Highway 385. At 5,922 feet in altitude, Scruton Mountain provides a great location for the Seth Bullock Lookout. According to Lists of John, Scruton Mountain has 342 feet of prominence. The summit and tower (53 feet high) provide great views of Pactola Lake (4,580 feet altitude), 3 miles to the north and numerous peaks in almost all directions, including Harney Peak, the Black Hill's highest. 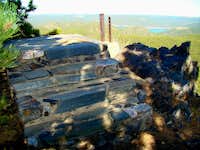 Most of the mountain is covered with Ponderosa pine, though there are some aspen there as well. Shales, quartzite, and granite formations are common on Scruton Mountain. Wildlife commonly seen in the area includes deer, elk, pronghorns, marmots and wild turkeys. Close to 200 varieties of birds can be seen in this region of the Black Hills. Osprey are one of the favorites for bird watchers around Pactola. Less commonly seen animals include bighorn sheep, mountain lions, coyotes, foxes, and eagles. 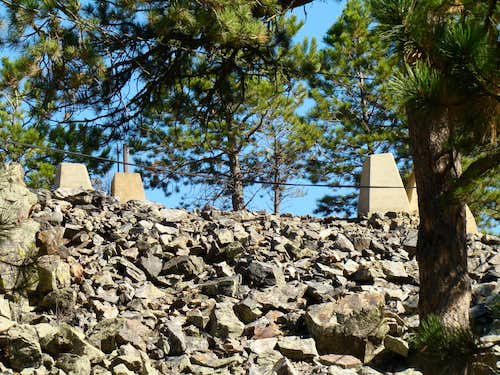 The foundations for previous towers at the summit of Scruton Mountain

The story behind the name for this mountain is kind of interesting. It is reported in the South Dakota Place Names book, that Scruton Mountain was named for the Scruton brothers, who operated a gold mine at the base of the mountain during the early years of the Black Hills gold rush. These brothers managed to keep the location of the mine secret. When the last brother died, the secret of the location died with him. Later, President Theodore Roosevelt initiated action to change the mountain's name to "Seth Bullock Peak". Since then, the mountain has worn two labels, being called Scruton Mountain and Seth Bullock Lookout. The Scruton Mountain/Pactola area is rich in history. An old gold mining camp was set up at nearby Rapid Creek in 1875. The camp was first referred to as "Camp Crook", after General Crook, who camped there in 1876. But when the population swelled to 300 in 1877, the town was named Pactola. When construction for a reservoir began at the location in 1952, the buildings that were left were relocated to various nearby sites, and what is now left of Pactola is deep under the lake. Scuba diving is popular at Pactola, due to it's clear waters, and divers delight in seeing what is left of the old town of Pactola. The first fire lookout tower was built on Scruton Mountain in the 1930's. The second was built on new foundations at the same location in the 1950's. When the current tower was built, it was relocated further west of the site of the first two. The foundations of the first two towers can still be seen at the eastern edge of the summit. The lookout was named after Seth Bullock, famous western sheriff, who was a close personal friend of Teddy Roosevelt. Bullock was famous for cleaning up the rowdy town of Deadwood. 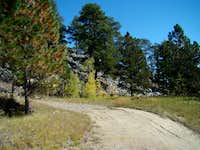 The trail to the summit of Scruton Mountain 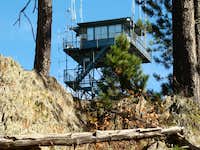 Go north on Highway 385 from Hill City about 9 miles to Custer Gulch Road (FS258) and turn left (west). Or, if you are coming from Pactola Lake, on Highway 385, it will be about 2 miles south to Custer Gulch Road. Travel west on Custer Gulch Road less than a mile until you come to a "Y" in the road, where you will need to turn onto Edelweiss Mountain Road (Road FS251). Follow this road until you came to a gated road on the right. This is the trail/road to the summit of Scruton Mountain. It shows up on some maps as FS156. Parking is a problem here, since both roads are kind of narrow and the gate sign says not to block the summit road. Fortunately, not many people hike this trail/road, so if you park in the corner of the intersection, out of the way, you will probably be OK. The route to the summit is very simple – just follow FS156. The roadway to the summit is quite narrow, and probably normally only sees forest service Jeeps. The grade is fairly steady, starting at about 5,240 feet with a steady ascent to the summit at 5,922 feet, at just under 2 miles. The surface changes back and forth from rough shale to sandy with small pebbles. It's a fairly easy hike with great views and lots of solitude. For another view on the route, click on this link: Scruton Mountain Route.

This is all on public lands, so there should be no red tape. If you go up during summer months, you will usually find the tower manned. If so, you can usually climb up to the top. It should go without saying that building a campfire in any non-designated area will get one in trouble. Fireworks will also bring trouble quickly.

Do not count on water being available at the summit, so bring an adequate supply with you. Though there are not many ticks in this area, repellent is still not a bad idea from spring through late summer. This is one of the few summits near 6,000 feet altitude that has a reputation for rattlesnakes. Caution is warranted. Mountain lions are seen in the area, though few problems have been reported for hikers. 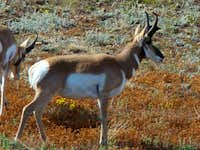 This summit is on public land, so it is open year-around. However, storms can develop quickly in the Black Hills, meaning severe lightning storms in summer and blizzards in winter. Please be aware of the weather before you set out. You can access the area weather information at:

Scruton Mountain lies in the Silver City USGS Quad. A very useful map for the area is the National Geographic Black Hills North Map. And if you would like a good map for forest service roads in the area, you can obtain a free Motor Vehicle Use Map from any forest service office in the area. The National Forest Service also has an excellent Black Hills map for sale. 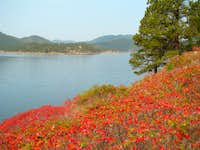 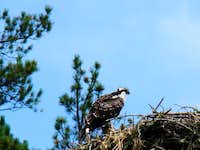 The National Forest Service has an office nearby at Pactola Lake. There are also marinas and campgrounds around the lake. Click on the links here for more information: