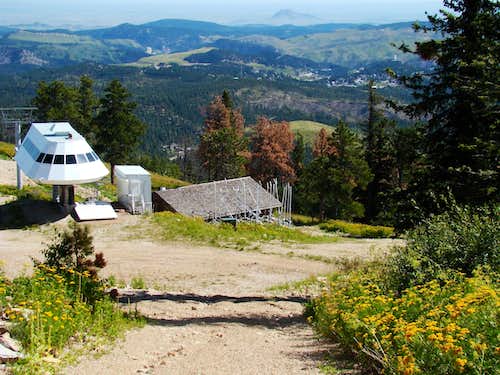 Terry Peak is the fifth highest summit in the Black Hills, and probably is the only other peak that could rival Harney Peak for the number of visitors over a year’s time. However, the essence of such visits is of an entirely different nature than that of Harney Peak’s usual visitors. In addition to being # 5 in altitude, Lists of John also ranks Terry Peak as # 4 in the Black Hills for rise, with 1,006 feet of prominence. This makes Terry Peak important for anyone who seeks to reach the “top five” summits in the Black Hills. Because of the observation deck at the summit, visitors are treated to a great panoramic view of the northern Black Hills. Summits easy to identify from Terry Peak include Inyan Kara Mountain (Wyoming), Crow Peak, Custer Peak, Little Crow Peak, Spearfish Peak, Bear Butte, and more. The upper rim of Spearfish Canyon is also visible from the summit. The mountain is home to the Terry Peak Ski Area, numerous homes, businesses, communication towers and even gold mining concerns. Because of its prominence and shape, it is one of the most easily identifiable summits from other major summits in the Black Hills. Despite the large influx of people on the mountain, wildlife is still seen in the forests, which are dominated by Ponderosa pine, aspen and birch. The forest is part of the Black Hills National Forest, and is part of the Northern Hills Ranger District. Terry Peak is located just a few miles southwest of the Deadwood-Lead area, and a few miles east from the head of Spearfish Canyon. The peak represents the tertiary intrusive igneous rock characteristics of the northern Black hills. 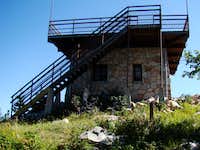 Terry Peak was named for General Alfred Terry. Mining operations have been an important part of the area history for more than a century. For many years, a major fire lookout was maintained at the summit. The tower’s stone base and tower was built in 1949, with living quarters built in the 1960’s in the space between the stone base and the tower structure. Maintenance problems plagued the tower, and by 1973 it was determined the lookout was no longer usable for the original purpose. So, the lookout and the living quarters were removed and the stone base was converted to an observation deck for public use. 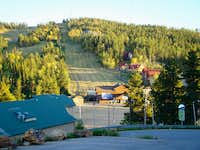 The largest ski area in the Black Hills is located at Terry Peak. Originally, the Bald Mountain Ski Club opened operations with a rope tow there in 1936. A chair lift began use in 1954. Currently, there are three high-speed chair lifts and one traditional speed lift for the 450 acre ski area. There are 30 runs total on the mountain, and some limited snow-making capabilities. More information is available by clicking on this link: Terry Peak Ski Area The Terry Peak Summit Road passes over the upper western slope of Deer Mountain. Deer Mountain is the site of the Ski Mystic Deer Mountain ski area. Ski Mystic has 40 trails, with three chairlifts and a “Zero Gravity Tube Park”. 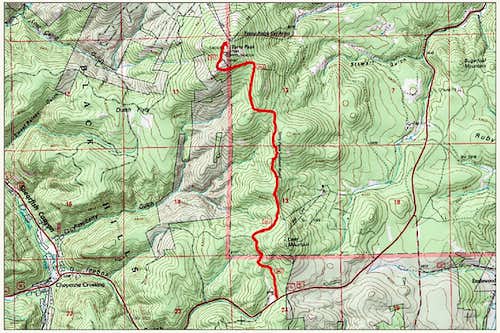 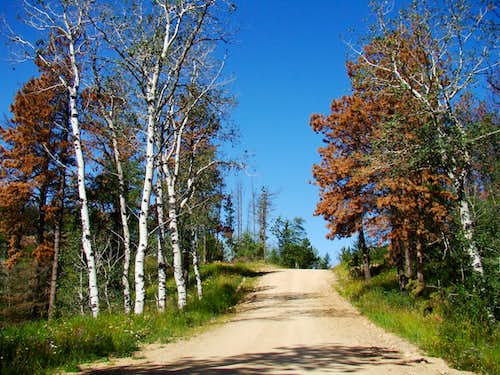 You may find information in publications, or online, that one can hike from the Blue Chairlift up the ski trail to the summit. This is not always true, as is the situation for 2014. Construction and open pit mining at the base have forced closure of that area until the ski season starts. This could continue well past 2014. Whether you can convince the Terry Peak Ski officials into giving you permission to hike another ski trail, will depend on your powers of persuasion and luck in getting through to them by phone. If you wish to try, you can call them at (605) 584-2165. Generally, the only reliable option for getting to the summit is Terry Peak Summit Road. It is 3.3 miles from Highways 85 & 14, and will take you approximately 860 feet up to the summit. There is not much room to park at the beginning of the road, and there is occasional traffic – often utility trucks. So please park your vehicle safely before you hike to the summit. There is one large radio tower right at the end of the road. A ski lift is on the other side of the summit and the actual highpoint you can see to the right (south). There is a sidewalk to the stairway that goes up the observation deck. 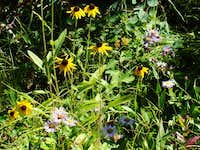 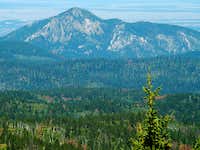 Because of all the private property on Terry Peak, trespassing will be your biggest concern. The Terry Summit Road is open to the public year-around, unless posted otherwise for construction or clearance of deadfall. The observation deck on the summit is also open for public access. If you care to venture anywhere outside of this, you will need to obtain permission. This would certainly include obtaining permission from Terry Peak Ski Area to hike up any of their ski trails in the off-season.

This region around Terry Peak receives the Black Hills’ greatest snowfall during winter. The rainfall in the summer is also plentiful. So, winter storms and summer lightning will likely be the two most recurring factors in decisions on when to ascend Terry Peak. For the latest in weather conditions, plus forecasts, click here: Terry Peak Ski Area Weather 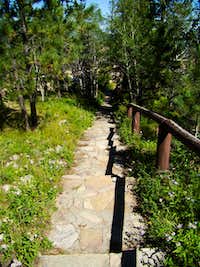 Given the large amount of private property on Terry Peak, camping on most of the mountain is quite unlikely. However, camping and lodging lists for nearby Deadwood, Lead and Spearfish are maintained by their chambers of commerce. The Black Hills National Forest also has campgrounds in this region. There are private campgrounds in or near Spearfish Canyon as well. Check out the links below to see what suits your needs:

Terry Peak lies in the USGS Lead Quad. A good map for the area is the National Geographic Northern Black Hills Map. If you are exploring the area on national forest roads, you can receive free at any forest service office in the area, their Motor Vehicle Use Map for the area.